It will drop almost the height of the Eiffel Tower, run 91 miles an hour, and cost almost as much to build as the entirety of Kings Island itself: The age, date, and height of the new local barf machine was announced last night, and it’s Orion, our first giga coaster.

And if you call it a giga coaster, you are an old person who uses a flip phone and once thought bagels were good nutrition. You must say “giga.” My nephews have made this very clear.

What was also very clear was that this was coming. Coaster enthusiasts have been predicting such an addition to 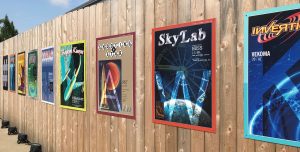 Kings Island for the past five years. They rode to the top of the Eiffel Tower and took photos of the cleared work site, tracked trucks with names like “Lift Hill Mechanics” into the park, deciphered in about two seconds such supposedly mysterious PR hashtags as #ITEOTWAWKI (“It’s the End of the World As We Know It”), and passed around pictures of under-construction track posted on social media by a nearby construction company “Look at the new track we just made!!”) It was the worst-kept secret in the history of throwing up.

Yet, the in-park announcement was livestreamed and swamped. People sat down hours ahead of time and waited for it. Tee shirts and season passes were sold at the park 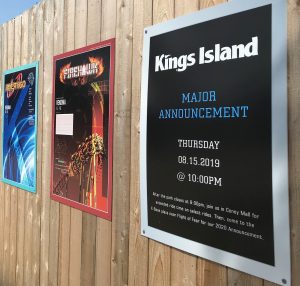 exits when it was over, and visitors will cheerfully swipe a credit card for a two-hour locker rental because I can guarantee you, relying upon what I gathered in the 45 minutes I spent visiting my friends in their physics class once, that park management is going to announce that they are very sorry, but if they permit bags anywhere near the line threshold and a fanny pack crosses into the ride shack, the steel helix will crumple in on itself or something.

These people sitting on the ground in the dark knew all this, and yet they screamed as the announcement video unspooled and the first, faint outlines of a massive lift hill began to populate the screen. All that sleuthing. Yeah! We’re a giga town now!

This was when I cried, because I cry when a baby squid floats by at the aquarium and cry again when I manage to make ice without incident. The teaser posters lining the worksite fence showed pictures of the rides of my childhood– Skylab, the Vortex– and, in the case of the Shooting Star, even my parents’ childhood at Old Coney. Reaching into the history of the park before it was even in existence is a subtle reminder that this moment was not, in fact, about $15.99 french fries or dive speed or even the stupid lockers. It was beyond. It was teenagers on a date, desperately searching for topics to discuss in the two hour line. It was the primary school kid standing on his tiptoes hoping to be tall enough to even join that line. It was the grandparents with cameras raised and pointing at the smallest, slowest seat on the carousel.

“That’s where the lift hill of Orion is going to be,” exclaimed whoever was behind the cell phone camera’s feed, aiming the lens at a blank spot of sky near the Racer. In a few weeks, the skyline of Kings Island will change. In a few months, we’ll all tip our heads back to see the new addition tower over layers of memories. In a few years, photos without it will look weird for its absence.

You will never guess what this all reminds me of.

Yesterday, I wrote: “The Reds are just hurling pitchers and prospects off the haywagon and taking up hitchhikers at random at this point. I woke up this morning and Jared Hughes was gone and an entire Cub Scout pack had been grafted onto the roster.” Sometimes I look around sections of Kings Island and don’t even recognize it. And my parents would probably say the same thing when they were my age. The rides which were icons in the 80s have been packed off to other parks or landfilled. But the space they cleared created space for Orion.

The Major 2020 Kings Island Annoucement comes precisely when we’re in the moment of the season when the roster isn’t barely recognizable anymore. It’s happening quickly. There are drops and loops and we’re going to get thrown around, you and I. Puig, just added himself, gives way to Aquino; Huges fades out to Joel Kuhnel and his 2.18 ERA. Now nearing the end of the season, the jumbling feels a lot like the team was in March.

The same natural forces which cause us such grief and joy in baseball are the same as the ones propelling paying bodies through the air. And a giga coaster is defined as one that not only features a drop of 300 feet or greater, but which also makes a complete circuit. What about all our stat-crunching, our second-guessing? Are we just going to wind up back where we started? Last place? Hopeless? Dialed in on pizza strikes?

What kind of physics class are we in for?