To the relief of many, Wandy Peralta was optioned to Triple-A last week when the Reds acquired Kevin Gausman. The move was more than warranted. Peralta has a 5.06 ERA, 5.94 FIP, and 4.89 xFIP this season. Among 200 relievers with at least 30 innings this year, only five have a lower fWAR than Peralta (-0.4).

Many people reading this post are probably wondering why he hasn’t been designated for assignment. So why on earth am I writing an article about him? Make no mistake: this isn’t a post arguing for Peralta’s merits. He has not pitched well. However, we need to get to the bottom of a bizarre stat I came across when perusing FanGraphs: his strangely low strikeout rate.

For his career, Peralta has struck out 17.9% of hitters he’s faced and 19.0% in 2019. On the surface, it looks like he just doesn’t miss many bats or have particularly sharp stuff. If it was that simple, I wouldn’t have written this article, though. The underlying numbers don’t support that theory.

Peralta gets hitters to chase pitches outside of the strike zone 32.4% of the time, according to Statcast’s GameDay Zones. League average is 28.7%. His overall swinging-strike rate is 14.5%, well above league average for a reliever in 2019 (11.8%). Of the 200 relievers with 30 innings this season, 101 have an above average SwStr%. In that group, 76 have above average strikeout rates (23.6% for relievers). We can see that a high SwStr% generally leads to a lot of strikeouts, but not always. This isn’t a particularly profound finding.

But Peralta is well above average at missing bats, and that makes his low strikeout rate even more mysterious. Among the 76 relievers in the sample with an above-average SwStr%, only four have a lower K% than Peralta. To take it a step further, no other reliever with a SwStr% at least as high as Peralta’s has a K% less than 24.3%. He’s over five percentage points behind. 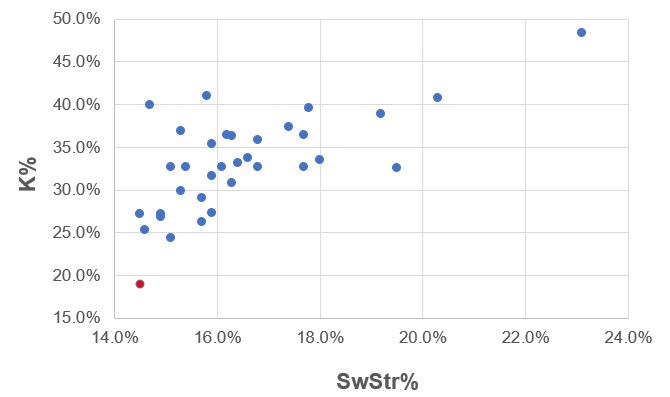 Peralta has two pitches that miss bats and draw chases at above average rates: the slider and changeup. He uses them a combined 63.8% of the time, with the former seeing most of its use against lefties and the latter against righties. Both pitches flash as plus when he can command them.

For most pitchers, these are numbers that should translate into a solid strikeout rate:

Peralta clearly has the ingredients to get more strikeouts; the changeup and slider can fool hitters.

Poor control explains some of this disconnect, but how much? Other pitchers strike out their fair share of batters while issuing plenty of walks. Robert Stephenson has a 10.7 BB%, for instance, but is still maintaining a 19.5 SwStr% and a 32.5 K%. However, when a pitcher isn’t getting into favorable counts often, it’s harder to strike batters out. Peralta has only gotten to two strikes against 50% of the hitters he’s faced this season, which ranks 154th among relievers. Stephenson, by comparison, sits at 60% (50th).

Erratic control is only a part of this equation. Peralta also has poor command, meaning he doesn’t hit his targets consistently. Stephenson has command issues with his fastball but can put his slider where he wants it for the most part. Peralta hasn’t demonstrated the same ability. A large portion of his whiffs come on pitches that batters chase out of the strike zone. Mistakes within the zone make Peralta very hittable and take away some of his deception.

Let’s compare Peralta to another lefty in Amir Garrett. Neither gets incredible movement on their slider — in fact, both rank well below average, according to Statcast — but they still get plenty of whiffs. Command makes all the difference. Within the strike zone, Garrett’s slider gets whiffs 14.2% of the time because he keeps the ball out of the heart of the plate and deceives hitters by playing it off his fastball. He consistently throws the ball down and away from lefties and keeps his slider out of the middle of the plate. He throws back-foot sliders to righties while mixing in backdoor sliders for called strikes.

Peralta simply makes more mistakes over the plate that hitters can handle when they swing. He throws most of his sliders against left-handed hitters, which means the pitches will drop right in their bat paths if he doesn’t bury them low and away. Unsurprisingly, he doesn’t do locate the slider consistently.

Peralta’s changeup suffers from a similar problem. When he buries it to his arm side, he gets whiffs; consistency is the issue. 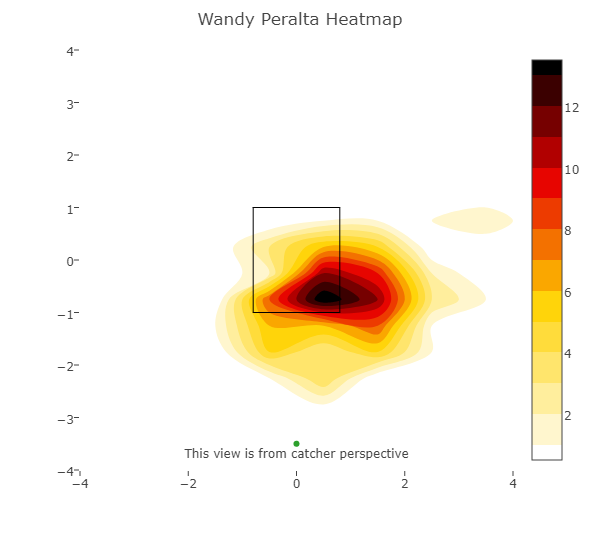 Fastball command also comes into play. Both Garrett and Peralta throw a sinker/two-seam fastball, which lends them to further comparison. Garrett likes to throw his fastball in similar locations as his slider. This creates a tunneling effect that can fool hitters. If they read fastball and get a slider, they’re way out in front.

Peralta doesn’t do this well, which limits his deception within the zone.

The raw stuff is what keeps the Reds coming back to Peralta. He’s a lefty who throws in the upper 90s and has two pitches that can miss bats. The clock is ticking on his time in the organization, however. He’s arbitration-eligible for the first time this winter and is a strong candidate to get non-tendered. Cody Reed is a better and cheaper lefty reliever at this point. If Peralta is offered a contract, he’ll have to make the team or get designated for assignment because he’ll be out of options.

Perhaps Derek Johnson and company can still help Peralta refine his command and start turning those whiffs into strikeouts. But it would defy the odds based on what he’s done throughout his professional career.