After losing another winnable game Monday night (the second in as many days), the Cincinnati Reds (56-61) attempt to even up the three game series against the Washington Nationals (63-55) at Nationals Park in Washington DC.

Alex Wood started his season strong in the first two starts of 2019. He didn’t pitch deep into either game against Atlanta or Colorado (understandable given his back issues), but he only gave up two runs in each start. Then came his start against the Cubs last week in which he gave up eight hits and five runs in only three innings. He will try to bounce back tonight. Obviously, Wood has small sample sizes, given that he’s only pitched in three game thus far, but it’s still been far from perfect for the lefty. He’s already given up four home runs in 14.1 innings. On the positive side, he has struck out 11 batters and walked only three.

Wood throws three pitches: sinker, curve and change up. Of the four home runs he’s surrendered, two have come off his curve ball. However, seven of his 11 strikeouts have also come on the curve ball. It looks like it’s all or nothing for Wood with his curve ball, but like I said previously, it is a small sample size. He has time to work out the kinks and make sure he’s not hanging his curve in the zone.

There are a few players who hit Wood pretty well, namely Gerardo Parra and Anthony Rendon. 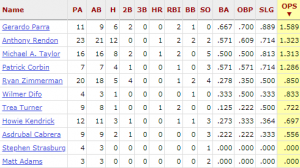 A first round selection by the San Diego Padres in 2011, Joe Ross was apart of a three-team trade that sent him to the Nationals before he made it to the major leagues. He got called up in 2015 and made 48 appearances between 2015 and 2017. Since 2017, however, he’s bounced between the minors and the majors and hasn’t been able to maintain any consistency.

Ross has a career 4.33 ERA and a 4.15 FIP, but in the last couple of years, it’s been north of 5.00. This season, his ERA is 6.75 and his FIP is 5.19 in 36.0 innings. Most of those innings have come out of the bullpen. Tonight will be his fourth start in 22 appearances in 2019. Although this season hasn’t gone the way Ross would like, his last two starts have been solid. He allowed a combined four hits and struck out eight in 5.1 innings and 6.0 innings against the Giants and Diamondbacks, respectively.

Ross’s main issue this season has been walking batters. In the 36.0 innings he’s pitched, he’s walked 20 batters. Even though he had excellent starts in his past two outings, he still walked seven batters in those starts.

-Tucker Barnhart is 4-for-4 with a double against Ross. Aside from Jose Peraza, who has one hit off Ross, no other Reds player has a hit against him. Don’t let that discourage you, however. Only six of the Reds position players have ever faced him.

Tyler Mahle, who will throw a bullpen today, is scheduled to begin a rehab assignment at Triple-A Louisville on Friday. He’s expected to throw 2 innings. #Reds

-Tucker Barnhart and his wife are doing good work outside of baseball.

Since late July, @Tucker_Barnhart has an OPS of nearly 1.000 and the @Reds have climbed back into playoff contention.

But this story isn't about ??.

It's about Tucker and @SierraMBarnhart's desire to make a difference. ???? pic.twitter.com/oYDjT2va7n

-This team has been so frustrating at times this season. I can’t be too mad because they’ve also been incredibly exciting to watch at times. Basically, the Reds are close to being really good, but they’re not there yet.

If the Reds had performed to their 62-55 pythWL they would be 1.5 games behind the Cubs and only a half game behind the Nationals for the top WC spot.

-Wes is right. As much as it would hurt to root for the Cubs and Pirates, it would help the Reds in their quest to #SneakOnIn.

Hey #Reds Fans: It's time to be Cubs fans from here on out – by @_wesjenks https://t.co/hbjjEAzxlB pic.twitter.com/BgfMGMyMsS