Luis Castillo out-pitched Jon Lester in what could have been a three-game win streak against the Cubs. A seventh inning meltdown changed the narrative of this series quite a bit and brings back memories, though not nearly as painful, of the 7-run blown lead vs the Cardinals. Still a long way to go (46 games) so anything can happen, but it is shaping up to be a season of “what-ifs” for the Redlegs. 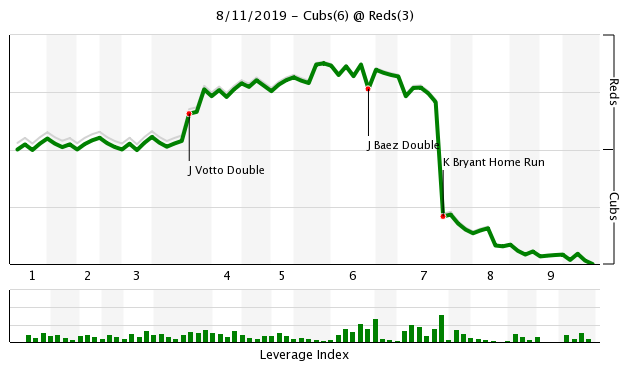 Castillo went 6.2 innings and allowed seven hits. He was responsible for three earned runs, though the third came via a home run allowed by Michael Lorenzen. Castillo only allowed three base runners in the first five innings, one of which was a hit by Jon Lester. The Cubs strung two singles and a double together in the sixth to plate the first run, and David Bell sent his ace back out in the seventh with a very manageable pitch count and the bottom of the order coming up. After a leadoff double, two groundouts plated a run but set up bases empty with two outs for Castillo to finish the inning. A single to Jason Heyward was the last action Castillo would see in this one.

Michael Lorenzen only got to face two batters and allowed a single to Castellanos and a home run to Kris Bryant, making the score 5-3 Cubs. Amir Garrett closed out the inning against Rizzo but allowed another insurance run in the 8th on an Ian Happ home run. The Reds should probably trade for Happ because if he had 81 games at GABP he would probably have better numbers than Mike Trout.

The offense got going in the 3rd inning, though hindsight really hurts looking back on a missed opportunity to score more. Senzel walked, stole second, and scored on a Votto double. Votto then scored on an Aquino single (really disappointing he couldn’t hit a home run. The Reds should probably send him down to AAA now). The inning ended on a well-hit ball by Peraza that was caught in right by a diving Castellanos. The ball had a 91% hit probability, and if it had fallen would have plated two more runs.

Eugenio Suarez collected his 33rd home run of the year with a 108 mph, 412 foot bomb to right center. He has been playing much better lately after a bit of a prolonged drought. Unfortunately, three runs is all the Reds could muster, with David Phelps, Rowan Wick and Pedro Strop combining for 4 innings of one hit, one walk, six strikeout baseball.

Kyle Farmer made a nice defensive play up the middle to get a speedy Javier Baez out at first. His offense has dropped below average after a hot start but it is hard to not love his defensive versatility.

Aristedes Aquino went 1-4 with an RBI single, a walk and a strikeout. That dropped his wRC+ from a 332 to a 309. Gonna be tough to sustain those numbers…

Ian Happ’s double in the seventh inning hit off the top of the yellow padding on the wall and bounced back into play, making that a live ball and not a home run. I did not know that so it was nice to learn something new today.

The Reds head to our nation’s capital for a quick three game road trip against the second-place Nationals. The Nats just finished a nine game road trip where they went 5-4. Monday’s probables are Erick Fedde and Anthony Desclafani.