The value of a top-tier pitcher like Trevor Bauer was on full display Friday night.

The amount of ugly swings from All-Star hitters in this clip is astonishing. #Reds https://t.co/PjJ79F6r8Q

In his first start as a Red vs. Atlanta, Bauer was all over the place. He looked much more like vintage Bauer last night. You think about what we saw last night and then consider what might happen after pitching coach Derek Johnson has had a chance to work with him for a few weeks.

Playing for a team with its back against the wall, @BauerOutage enjoys fighting with his @Reds teammates. #BornToBaseball pic.twitter.com/GhvKu0O7Ig

Truly, the Reds have the equivalent of three All-Star caliber starting pitchers in their rotation for the remainder of this season, and for at least all of 2020. The other two – Sonny Gray and Luis Castillo – start tonight and tomorrow.

Entering today, the Reds trail the Cubs by seven in the NL Central standings. Second-place Milwaukee is 4.5 ahead of Cincinnati, and third-place St. Louis is four in front of the Reds. The Wild Card standings look like this: 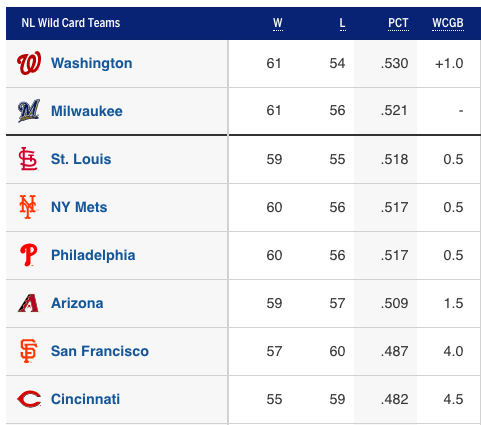 Many will say that is far too many teams to have to climb over to have a legitimate shot. They were saying things like that about the New York Mets two weeks ago before they won 14 out of 15 games with a standout starting pitching rotation that got better when they added Marcus Stoman from Toronto before the deadline.

The Mets went from 2nd-worst record in the NL to a tie for the 2nd Wild Card spot in 4 weeks.

If Alex Wood can find his 2017 form, the Reds have the same sort of rotation that can win your team any series, regular season or post-season.

Game three of the four-game weekend series at Great American Ball Park against the first-place Cubs begins at 7:10 Eastern time.

Righthander Hendricks has allowed fewer than three runs in seven consecutive starts, so he is on his game. Gray is on a similar streak, having allowed more than two runs only once over his past seven starts. It shapes up as a close, well-pitched game.

At this point, we all hold our breath when Manager David Bell brings in a reliever. You have to give Amir Garrett credit, though, for a pitching feat similar to Bauer’s earlier in Friday’s game. He came in with the bases loaded in the eighth and hit the first batter he faced to force in a run. But then he retired Baez, Happ and Schwarber again without any more runs scoring. This is Jared Hughes’ final game on suspension, and he will return Sunday.

Your author was sitting in the upper deck GABP bleachers when this happened, and saw this ball actually leave the stadium and bounce into the river …