Great American Ball Park is the venue as the Cincinnati Reds and Chicago Cubs kick off a four-game series tonight at 7:10 Eastern time. As play begins tonight, the Reds are four games behind in the race for the second National League Wild Card playoff berth, and seven games behind the first-place Cubs in the National League Central.

Each game in the series features a pitching matchup of above-average veterans from whom a good pitching performance can be expected. There are no Lisalverto Bonillas taking the hill for either team.

On paper, it looks and feels like a playoff-type matchup, at least from the Cincinnati perspective.

To earn at least a Wild Card berth, the Reds will have to climb over at least six teams in front of them. It’s a daunting task, but one that your mind’s eye can see as possible when your team is running an above-average starting pitcher to the mound every day. After this series, the Reds visit the Washington Nationals for three and then return home to host St. Louis for four. Those are two of the teams the Reds must surpass.

The key for this series, the next two weeks, and the rest of the season if a playoff berth is to be achieved is to win every series (or at least the vast majority of them). Of course we always hope for sweeps, but the realistic objective is to win each series. Take three of four from the Cubs, two of three from Washington, and three of four from St. Louis, and you are absolutely in the thick of it. Going 6-5 in those 11 games leaves you just about where you are now, but with 11 less games to play catch up with.

It’s fun to talk about standings and races in August, is it not? Here’s hoping for a big crowd tonight in which Reds fans will outnumber and outyell the Cubs fans.

Hamels has a history of dominating the Reds, but he did get tagged with a loss against them on June 28 at GABP. Hamels pitched only one inning, giving up a run, before leaving the game with a muscular injury that sidelined him for more than a month. In his first start back from that injury on August 3, he shut out the Brewers over five innings. Wood is in his third start for Cincinnati, and he has acquitted himself very well in the previous two.

Jared Hughes begins his three-game suspension tonight. He’ll be back in the bullpen for Sunday’s game, but until then, the Reds bullpen will be one pitcher short. New acquisition Kevin Gausman will be in uniform, and it will be interesting to see how Manager David Bell (back from suspension) will use him. With Wandy Peralta being optioned to Louisville Wednesday, Amir Garrett is the only lefthander currently available in the bullpen.

The Cubs bullpen is undermanned with Craig Kimbrel, Brandon Kintzler and Brandon Morrow all on the injured list. Among pitchers they have currently active, Pedro Strop leads with nine saves this season.

For Farmer to start this big game with as little overall big-league catching experience as he has shows just how much his stock has grown in the eyes of Reds management. It may also show how much Wood, his good friend, values his presence.

Former Milwaukee Brewer Jonathon Lucroy, just picked up from the Angels, will get the start behind the plate, catching his former Texas Rangers teammate, Hamels. 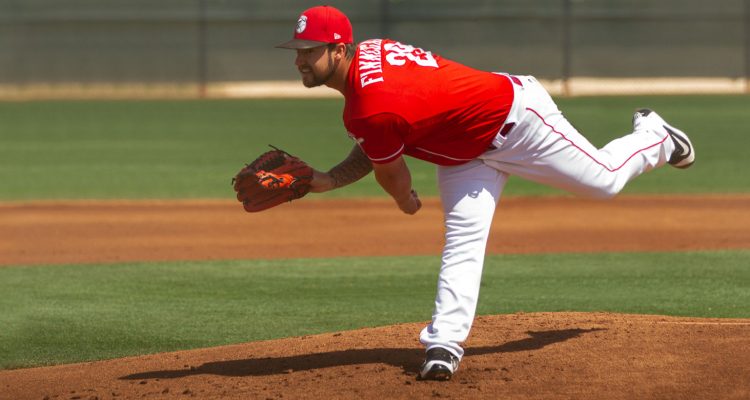 Doug Gray has up a report on how Brandon Finnegan has looked since he returned to the mound two weeks ago in Double-A for the Chattanooga Lookouts.

Steve Mancuso has up a breakdown of Michael Lorenzen versus Mike Trout over at Reds Content Plus that you should be sure to check out.

Minor league shortstop Blake Trahan, who was designated for assignment to create space on the 40-man roster for Kevin Gausman, cleared waivers and was outrighted to Louisville.

Curt Casali will begin a rehab assignment at Louisville Friday.