Last May, I wrote about Eugenio Suarez’s blazing start to 2018. A big part of his success was coming against breaking pitches, which was an area he has struggled with earlier in his career. With his offensive breakout in the books last year, it is understandable to be a little bit disappointed that Suarez is currently back down to his 2017 production. What has changed in 2019? The breaking ball is getting revenge. 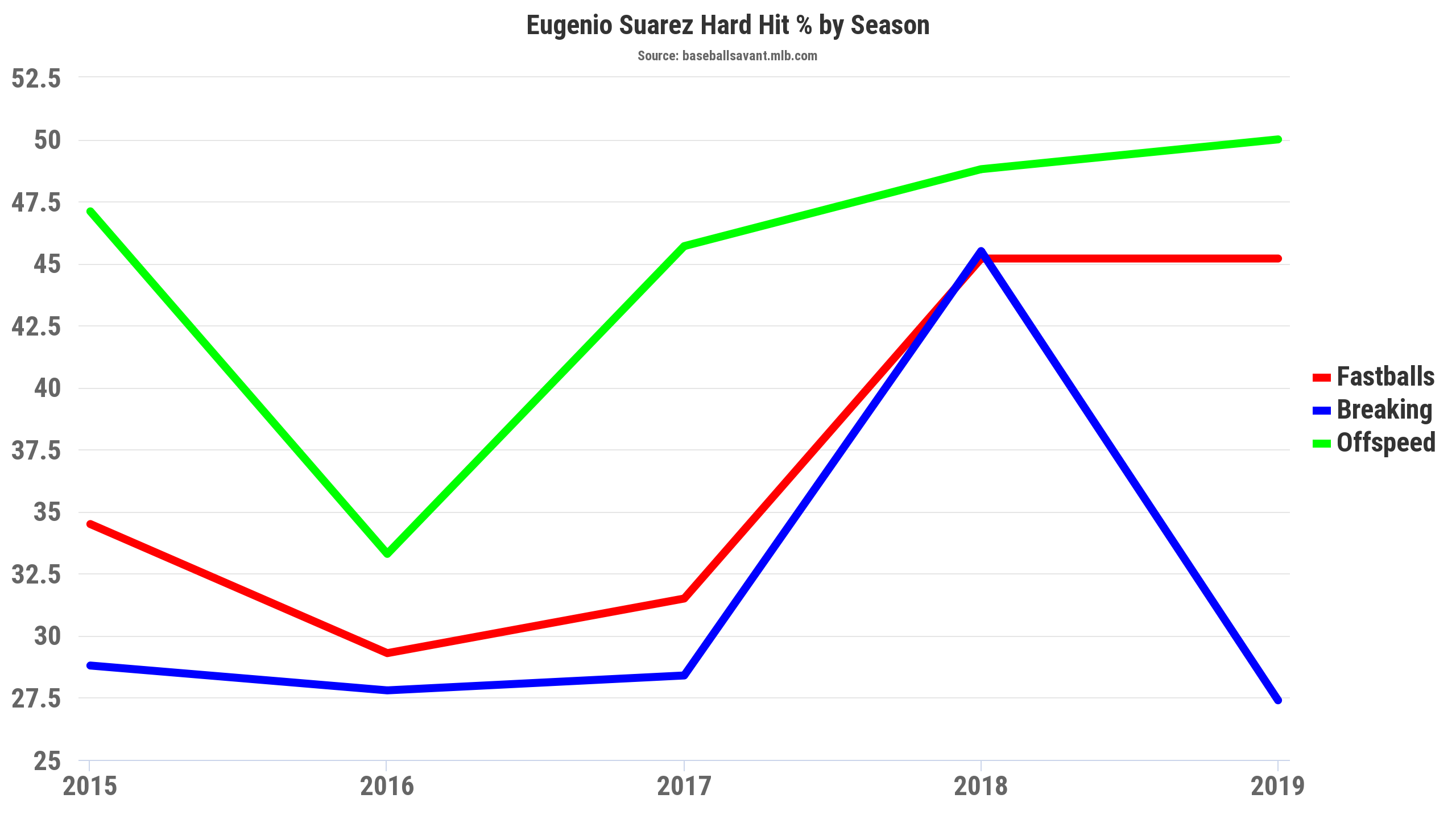 After showing huge improvements in his hard hit rate across all pitch types last year, Suarez is back to his career norm against breaking balls. This is contributing to an overall drop from 45.6% to 40.9%. He is still hitting fastballs and offspeed pitches well, but pitchers have caught on and have thrown him about 5% more breaking balls compared to last year.

Another contact stat that shows huge variations from 2018 is Suarez’s barrel rate, which has shot up on fastballs but dropped a good amount of breaking and offspeed stuff. 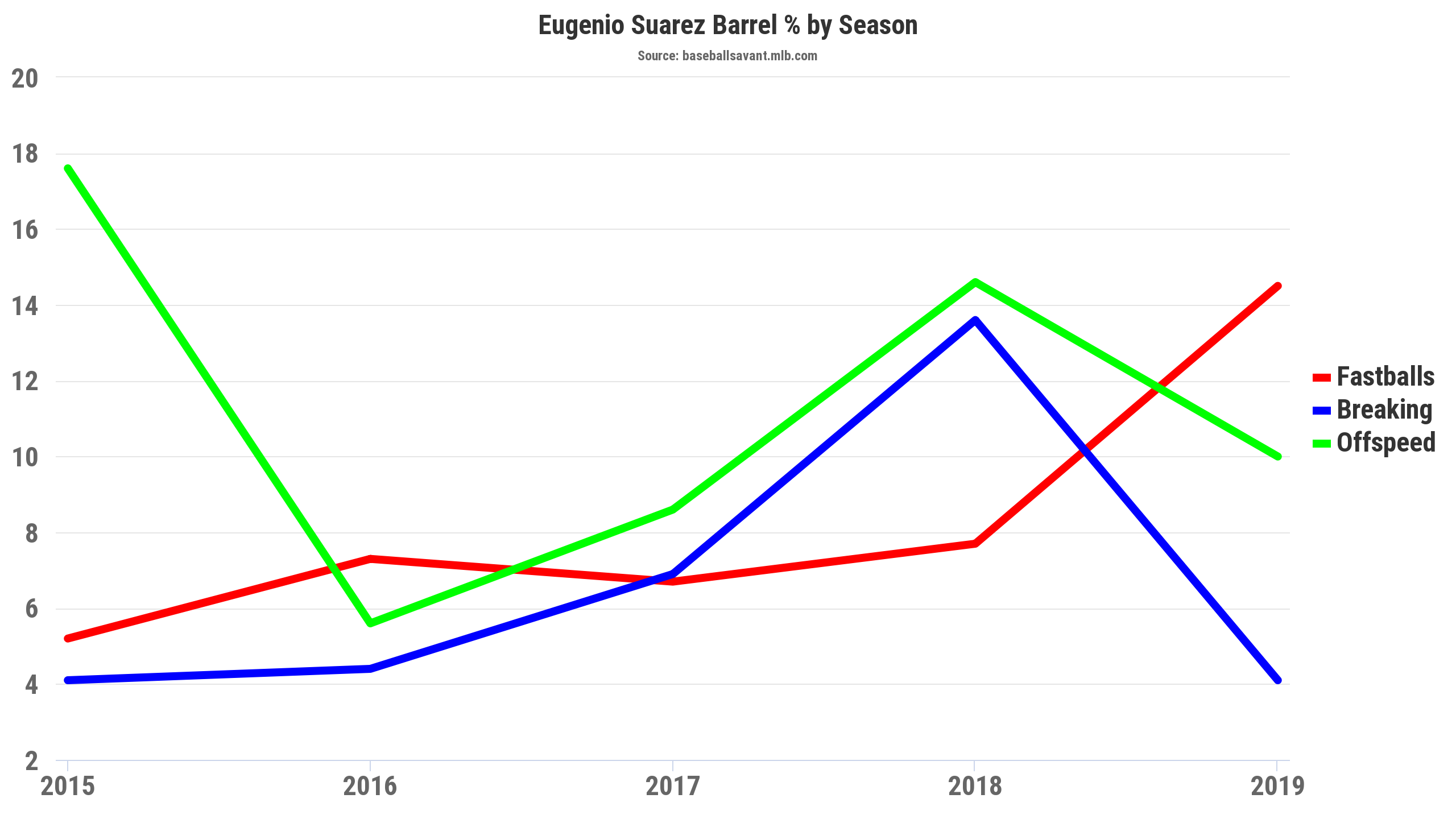 Despite the drop in two pitch categories, his overall barrel percentage has increased from 9.7% to 11.5%, well above league average of 6.3%.

Hard hit rate and barrel rate are great indicators of contact and Statcast can put all that data together to provide expected stats, such as slugging and weighted on base average. Despite slightly increasing his hard hit rate on offspeed pitches, his xSLG has fallen off a cliff against them, as well as breaking balls. 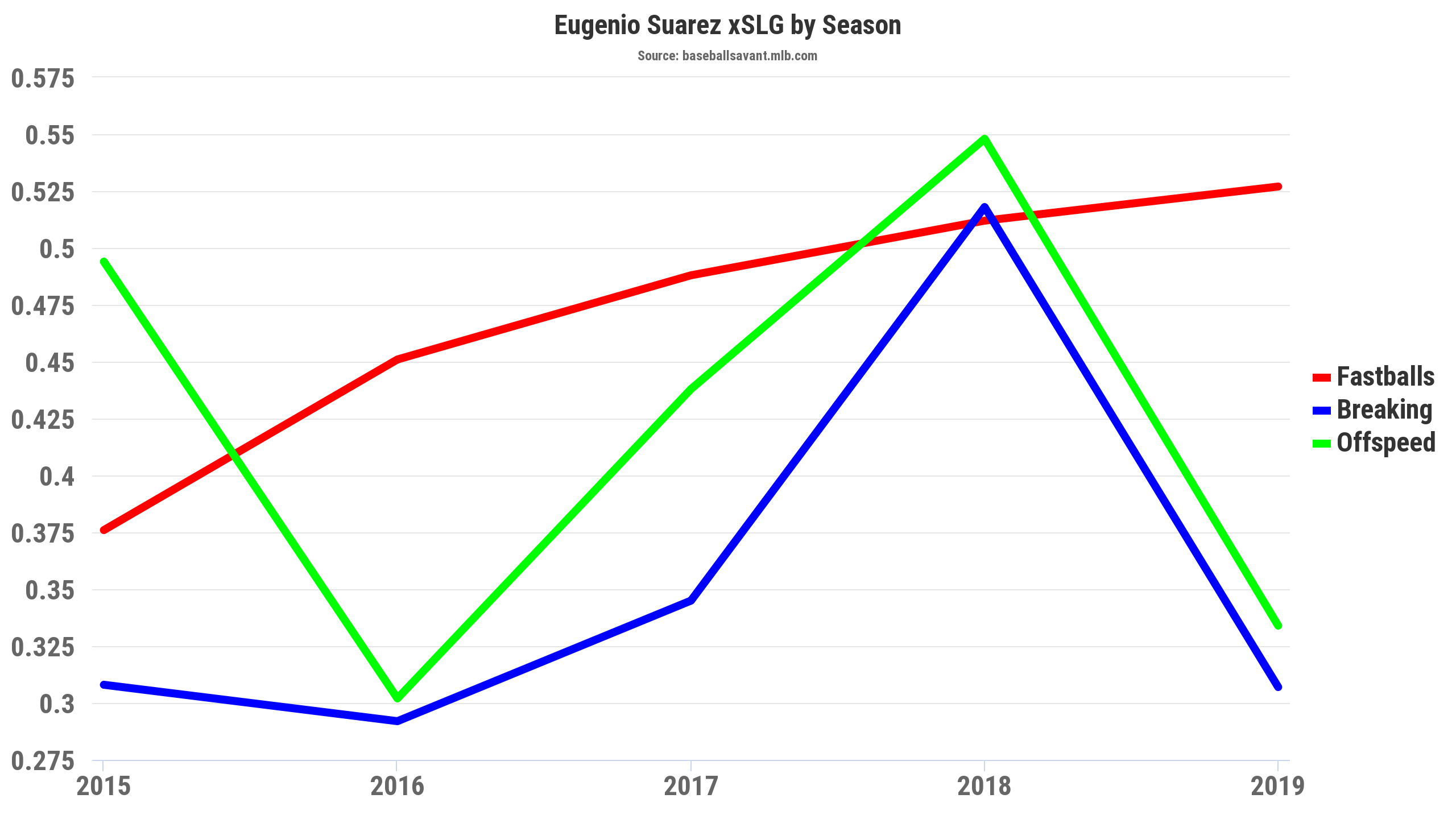 Suarez’s actual slugging rate this year is very similar to last season (0.525 vs 0.527 last year), but he has actually been a bit fortunate relative to his expected slugging. Last year was much closer at 0.518, but so far in 2019 he is only at 0.445 xSLG based on the strength of his contact. Again, he is hitting fastballs better than ever, but he has lost his touch on the breaking and offspeed stuff.

Looking at overall production (wOBA) and expected production (xwOBA), we see more of the same. An unusual breakout year against non-fastballs in 2018 certainly contributed to his incredible overall season. This year, it has been back to reality a bit. 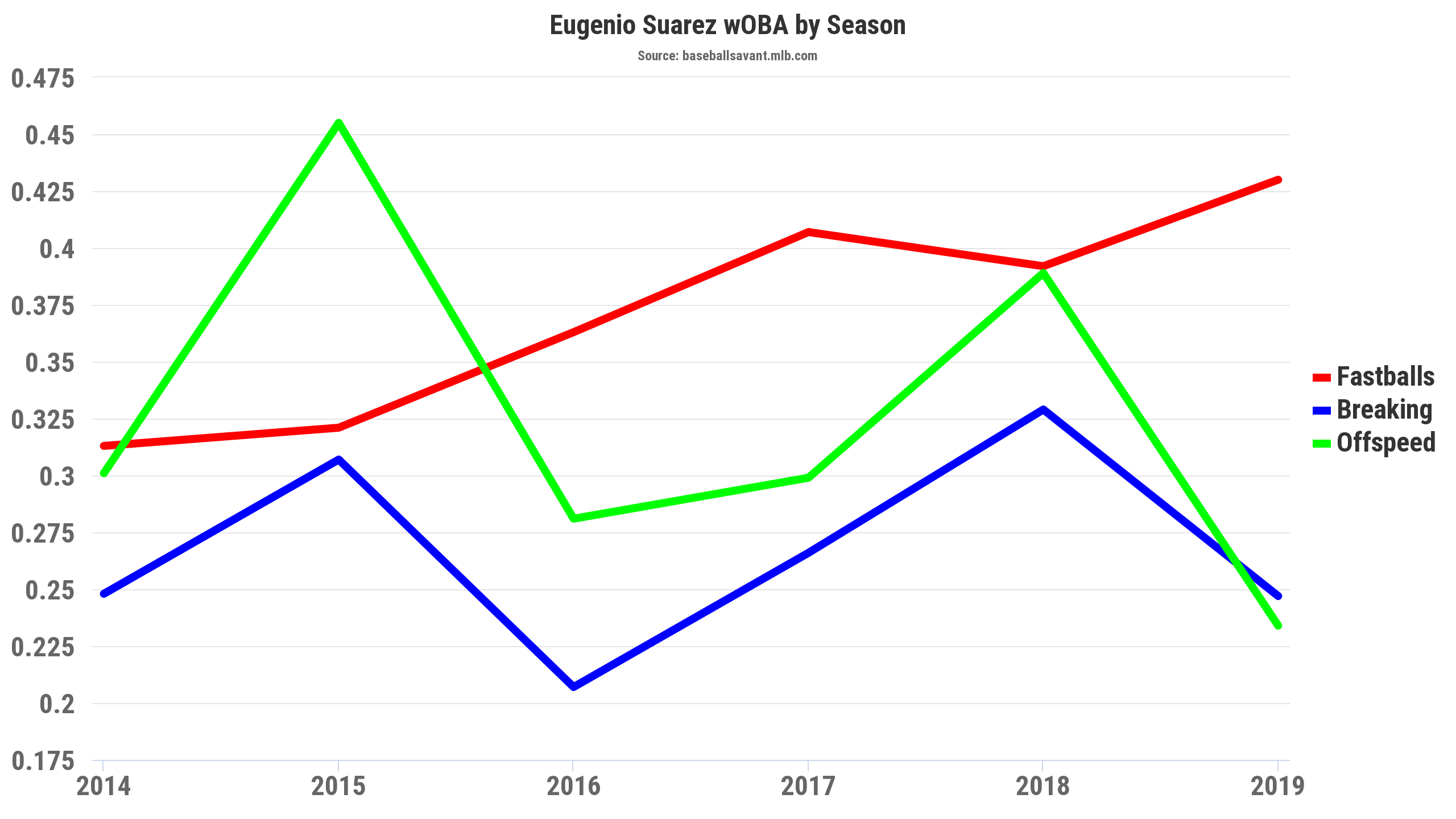 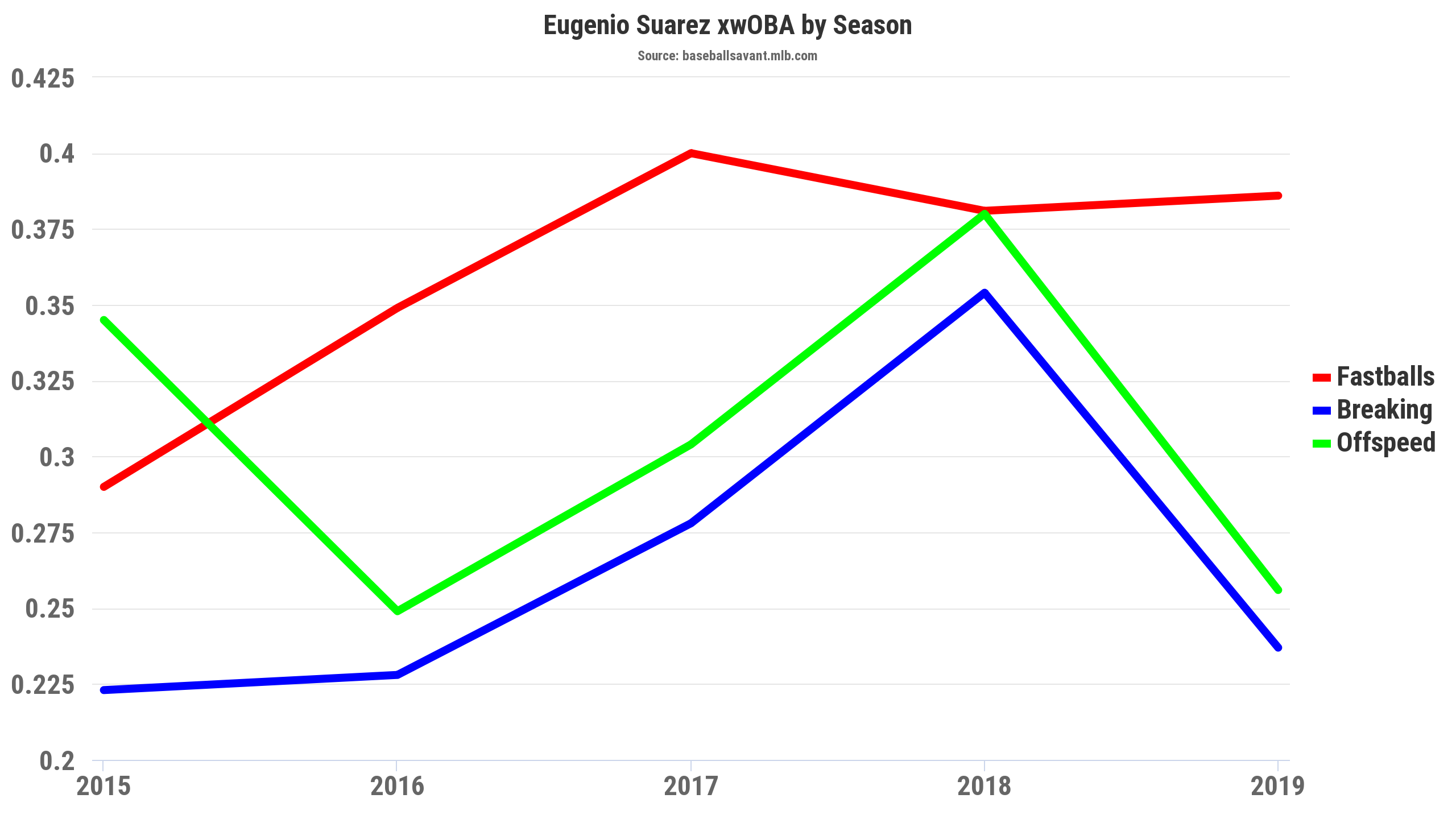 Looking at some underlying factors, Suarez looks to be getting underneath the ball more this year, with an increased launch angle and an above league average Under %, according to Statcast. This could be contributing to him swinging though the slower pitches more often, as his Whiff % has increased on both the breaking and offspeed types.

Another very interesting change is a huge jump in Pull % from 39.4% last year to 50.3% this year. With a league average of 36.4%, Suarez may have made a bit too many adjustments to try to maximize his power and ability to get the ball into the air. While it has paid off on fastballs, he has sacrificed a bit of his abilities against the breaking ball in the process.