If conventional wisdom says the Reds should sell, Red Reporter argues that actually the Reds should buy, and I say well what if the Reds just do nothing, then I really cannot wait for the final installment of this Galaxy Brain meme. 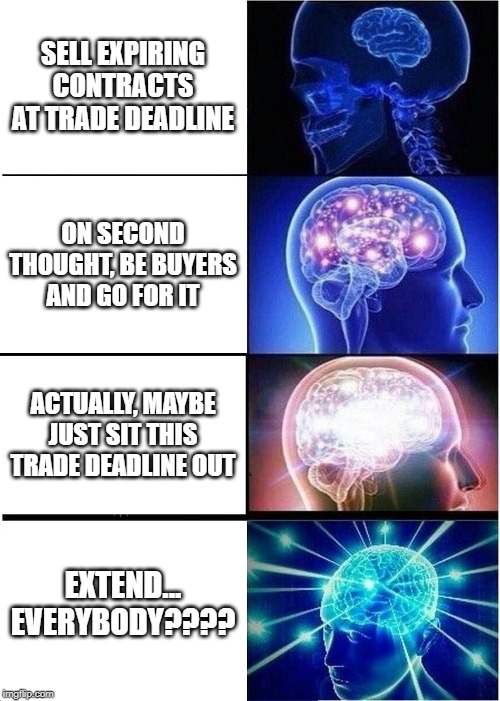 More seriously, the Reds should consider just doing nothing over the next two days. I know that’s an incredibly boring way to approach the Trade Deadline and that any small, incremental upgrade is better than no upgrade at all, but what can the Reds even accomplish at this deadline?

As C. Trent Rosecrans wrote at The Athletic last week, the Reds really only have seven major league players worth selling. Raisel Iglesias still has 2.5 years on his team-friendly extension but is in the midst of his worst season as a big leaguer. Selling Iglesias wouldn’t necessarily be selling low because of that cost-effective extension, but also the Reds intend to contend during those seasons. The Braves make the most sense as a trade partner in theory, but the Braves have been incredibly reticent to deal from their deep prospect pool so it seems unlikely to happen. Also, unless the team receives an MLB-ready shortstop, then dealing Raisel wouldn’t upgrade the team; it would just further weaken an already scuffling bullpen.

Yasiel Puig is the only other big name the Reds can offer for a notable return, and his bat / defense will certainly help any contender outside of New York. However, as Rosecrans pointed out, Puig’s reputation precedes him and some teams might not want to add his presence into the clubhouse midseason. Also, as teams have come to value years of control, the returns for rentals have diminished, so the Reds truly may be better off just extending Puig than anything else.

As for the other five, there’s not much hope. Steve Mancuso noted at Reds Content+ that yesterday’s Jordan Lyles trade likely shows the Reds won’t get a prospect of acclaim for Tanner Roark. Jose Iglesias and Derek Dietrich could be bench bats for any contender, but no contender trades the farm for rental bench bats. Lastly, David Hernandez and Jared Hughes have both struggled of late and could find suitors given every team’s need for more relievers, but like Iglesias and Dietrich, wouldn’t command top dollar. Heck, a well-regarded reliever in Jake Diekman only brought back two “fringe prospects” according to FanGraphs.

On the buying side of things, Red Reporter’s Fred Regorter correctly pointed out that it’s a buyer’s market (evidence: see above paragraphs) but who should the Reds buy? Noah Syndergaard would be fun to add but not for the Mets exorbitant asking price. Edwin Diaz, who the Reds have been linked to, doesn’t make sense for the club. Clint Frazier is likely available but any deal for him will feel more like selling than buying.

And as for Matt Boyd, I’m still not sold that he’s actually that good. At no level of professional baseball has Boyd struck out as many batters per nine as he has this season, and only once before has he maintained this kind of walk rate over 50 innings or more. All of the hype surrounding Boyd just reeks of an Erik Bedard redux to me. For those who don’t remember, Bedard posted the highest strikeout and lowest walk rates of his young career for Baltimore in 2007, recording 5.0 fWAR. In the offseason, he was traded to the Mariners and over the next six years, across five different teams, Bedard was worth 8.0 more fWAR. Not exactly the production the Mariners expected when trading five prospects including then-minor league outfielder Adam Jones.

Are there other players available that aren’t currently bandied about in the mainstream rumors? Probably. If the Reds pick up Francisco Lindor through some means of sorcery, I will publicly renounce this entire blog post.  But until that happens, why shouldn’t the Reds just not do anything at all?

The roster as constructed is good. Not playoff-caliber good as we’ve learned this season, but also not as bad as the record indicates. With Alex Wood and the Reds first- through third-string catchers coming back, the team is already getting better this deadline! There’s nothing wrong with entering a holding pattern and using the rest of this season to frustrate the Cardinals, Brewers, and Cubs hopes instead of giving those teams an easier opponent by selling.

By refraining from buying, the Reds also can hold onto the rebuilt farm they’ve clobbered together through the second half of this rebuild. Tyler Stephenson, Tony Santillan, Jonathan India, and Jose Siri all have 2020 ETAs, and I wouldn’t be surprised if Taylor Trammell’s timeline was sped up next season. That’s more major league ready talent than anyone the Reds could find by selling right now, so why ship it off by buying?

I know, new names are more exciting and nothing about the phrase “holding pattern” screams optimism or even entertainment. But it sure feels like the smart thing to do. And, as Nick Kirby keeps pointing out on Twitter, if the Reds can stick around in the hunt until August 22, the schedule gets a whole lot easier. It sure seems like doing nothing makes more sense than doing anything at all.