The Cincinnati Reds (48-55) continue their homestand with the first of three games against the Pittsburgh Pirates (46-59) tonight at 7:10 PM. The Reds are coming off back-to-back series wins and are now three games ahead of the Pirates for 4th place in the NL Central. The Pirates have lost 8 straight games and are just 2-14 since the all-star break.

The Reds sit at 7.0 back in the division and 7.0 back from both NL wild card spots. The Reds are in a tough spot as the trade deadline looms on Wednesday. This is by far the closest they’ve been in a race heading into August since 2014, but Fangraphs still only gives the Reds a 3.7% chance of reaching the postseason.

Sonny Gray has cracked the top 10 in the NL in fWAR as he is tied with Clayton Kershaw. It has been a remarkable turnaround for Gray who just keeps getting better and better. Gray has been sensational in July as he has a 1.33 ERA/2.30 FIP in 4 starts (he has only allowed 2 home runs in 27.0 innings). Gray has a 2.35 ERA in 3 starts against the Pirates this season. 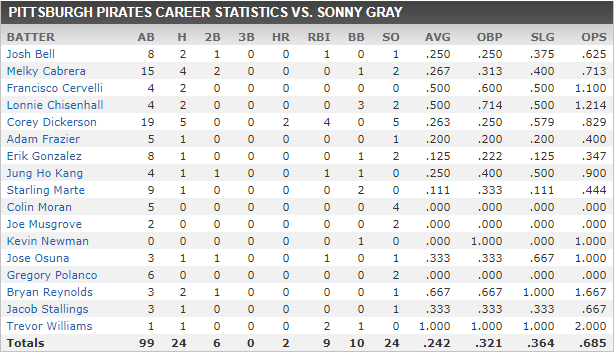 Jordan Lyles was scheduled to start this evening, but he was traded this afternoon to the Brewers. Alex McRae was called up and will start in his place. It will be the first start of McRae’s big league career. He has made 7 career appearances all out of the bullpen over the past two seasons with a 7.08 ERA/7.29 FIP. He was the 311th overall pick for the Pirates back in 2014. His career ERA in the minors is only 4.53. He has made 16 starts at AAA this year with a 4.96 ERA.

Right-hander Jordan Lyles has been traded to the Milwaukee Brewers, source tells ESPN. Right-hander Cody Ponce will go back to the Pittsburgh Pirates.

The Reds have finally given themselves some separation from the Pirates for 4th place in the NL Central. The Pirates are playing some really bad baseball right now and this is a great opportunity for the Reds to bury them and end the misery of finishing last. I still haven’t lost hope completely in the Reds reaching the postseason, but it is a long shot. This is the kind of series that they have got to capitalize on. Go Reds!