In spring training, Sonny Gray drew attention for some comments about his time with the Yankees. Most of the backlash toward him was taken out of context. But this quote still stands out from Eno Sarris’ story in The Athletic:

“I can’t command my slider that well,” the new Reds starter admitted. “I want to throw my slider in the dirt with two strikes, and that’s about it. I don’t have that type of slider, like Tanaka’s slider. His slider, the catcher will catch it, and the batter will swing and miss. If I get a swing and miss, the catcher is blocking it in the dirt. When I try to throw sliders for a strike, I get around it and it’s just a [expletive] spinning pitch.”

Gray believes throwing the slider more was a big reason for a walk rate that approached 10%. That certainly played a part. The problem wasn’t that his slider was suddenly bad. It still had elite spin and movement. Hitters batted only .185, slugged .321, and whiffed 39.1% of the time against it. The four-seam fastball was Gray’s biggest problem, as the opposition obliterated it. Throwing more breaking balls, however, made his slider and curveball “morph” together, as he described it.

The data says the Yankees didn’t have Sonny Gray throw more sliders than he did with the Athletics. He increased his curveball usage more than anything. But he did change when he threw the slider. With the A’s, he liked to throw the pitch primarily with two strikes and his curveball earlier in the count. The Yankees apparently made him switch that up. When he was behind or even in the count, he threw a slider 13.7% of the time in 2018 versus 8.3% from 2015 to 2017. That’s not an enormous number, but his poor command of the pitch caused him to fall further behind in the count.

In 0-2 and 1-2 counts, his slider usage dropped from 47.1% to 29.5%. His curveball, which isn’t as strong of a swing-and-miss pitch, became the primary pitch with two strikes. Gray’s strikeout and whiff rates fell. Behind a revamped approach, his whiff rate is up slightly in 2019 (25.2% to 27.0%) and his strikeout rate has significantly increased (21.1% to 28.7%). His slider usage when he’s ahead in the count has returned to its pre-Yankees rate, and the curveball rate has fallen. That has contributed to the strikeout bump, but it’s not the primary reason.

With the help of Derek Johnson, he has seemingly turned the “morphing” into a strength. He has thrown even more breaking balls and fewer fastballs but seen much better results. 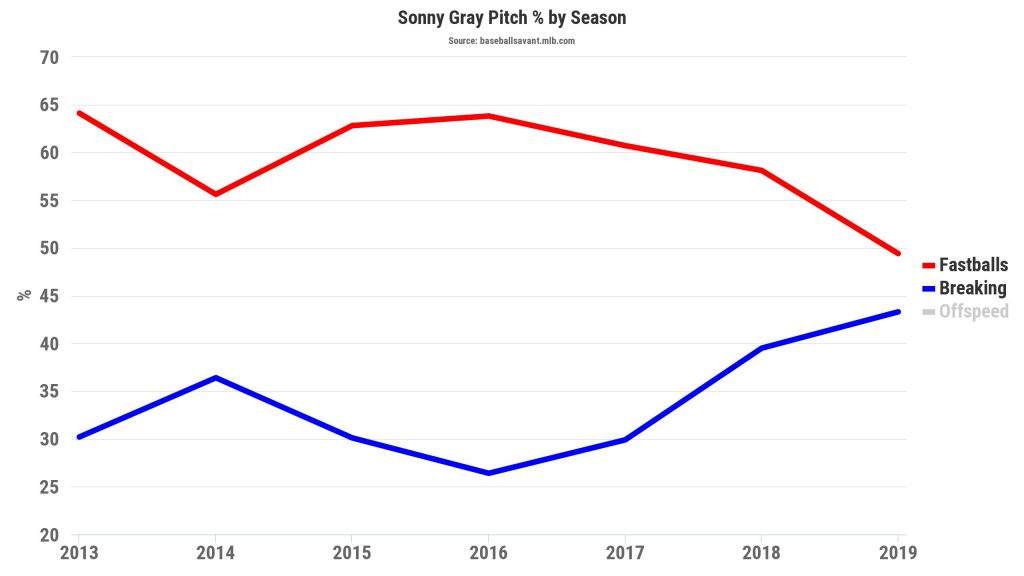 The curveball and slider both have elite break and drop, per Statcast’s pitch movement leaderboards. But Sonny Gray has added a new level of deception because the slider and the curveball are getting almost identical horizontal movement. The curveball averages 15.6 inches of break, while the slider comes in at 15.5 inches. Last year, those numbers were 16.1 and 12.2, respectively.

How has Gray done that? He added even more spin, about 100 rpm, to his slider. More spin for a breaking ball usually means more movement. A total of 261 pitches have thrown at least 100 sliders this year, and only 18 have a better average spin rate than Gray.

On a vertical plane and from a velocity standpoint, the slider and curveball are different, which is where the deception comes into play. The curveball is 3 mph slower than the slider but gets 11 more inches of drop. Even if the batter reads a breaking ball out of Gray’s hand, he’s making it harder to identify which one is coming because they look similar in terms of horizontal movement.

The numbers bear out the effect of this change:

The pitches have been absolutely unhittable even when batters have made contact with them. Gray’s curveball has never been better by any of these metrics. He’s throwing it early in the count — as much or more than his four-seam fastball in 0-0, 0-1, and 1-1 counts. Last year, he threw fastballs the majority of these counts (58.5%), but has heavily backed off of his two-seamer and reduced his heater usage to 44.0% in this situations. He’s also gone back to finishing batters off with the slider when he gets two strikes.

However, he’s still mixing in the curveball enough with two strikes (20.6%) to keep hitters honest and prevent them from sitting on his slider.

Rather than trying to take two pitches and make them as distinct as possible, Gray has focused on making them look similar for as long as possible to fool hitters. It’s one big reason he’s gone from a Bronx castoff to a Cincinnati all-star.