I missed a Reds game this week. On a summer night in a park in Cincinnati, a man sang and a band played, and the 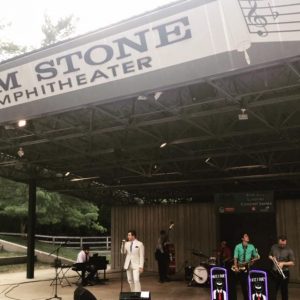 cicadas tried to butt in but became part of the chorus. I sat in a park with the full trees overhead and the wooden boards of the little amphitheater below. The only artificial part of the entire evening was the reflective flash of screens as various audience members held up cell phones, snatching a photo, a flicker of video. This was a waste of electrons and time. We all failed. You couldn’t really be there unless you were there.

The man was Mickey James, working with the Queen City Crew. You could hear exactly what they were playing from the parking lot, because what was happening here was enunciation and various instruments doing their jobs. ‘Hey. ‘Moondance,'” I said to Josh The Pilot as I dangled a backpack with one hand and reached for his fingers with the other. He’s home tonight. We’re home, the both of us, and here.

Sometimes Mickey James wore a Panama hat. Sometimes he did not. Always the band played music that was created, sung, and spun before any of us were born. Every now and then people who could pull off that sort of thing danced to either side of the stage. They look each other in the eyes. They take up space.

“First dance song,” I reminded my husband as “Come Fly With Me” began.

He nodded, but did not suggest that we join the dancers (“Not this arrangement,”) and I settled back into the boards still warm from the slanting-away sun. Well enough. Someday time and money and dance lessons would eliminate such objection. Someday I would wake up not wondering what day it was and which hotel I’d tumbled to sleep in and which flight to Cincinnati was sufficiently empty for me to hitch a ride, here in Roanoke or Greenville or Salisbury or wherever it was my laptop and I wound up this week in an effort to look up at my dance partner on the other side of the sticky little table at the hotel continental breakfast. For now, it’s the hotel in Greenville, North Carolina, or saying goodnight to a flicking image of my husband, his face in the palm of my hand but nowhere in the room.

And anyway this paragraph in a page of summer was drawing to a graceful close, with the sax and the piano and drums and the trumpet and MIckey there asking if there were any Bobby Darrin fans in the audience. That same night, up in Chillicothe, there was singing too. These guys were probably not Bobby Darrin fans. They did not wear their hats.

And well enough. I don’t know how this came to pass in Chillicothe– if the original singer canceled, if the bus carrying the school choir broke down, if the bullpen of the Chillicothe Paints actually was scheduled to open their own game with the National Anthem. All I know is, with the sun reaching low and the bleachers still damp with the air of July, a clutch of relief pitchers stood irony-free on the grass in Ross County, Ohio, and beautifully missed most of the notes of The Star Spangled Banner. And it was well enough.

Here in this midsized media market, there are blasts of noise at the ball park. It is understandable. Baseball is not a game of silence. It is defined by its sounds. Walk-up music, keyboard flourishes, and one-second bursts of Harry Belafonte slam down from above. They smash against the voices of the color commentators and the play by play men.

Yet the loudest, screamingist, most thousands-as-one sports moment of my life happened without a single prompt from a scoreboard– in Riverfront Stadium, when the Reds won in the 10th inning of Game 2 in the 1990 World Series. Our voices filled their absence from home plate. Somebody unfurled an entire roll of toilet paper from the red seats to the Astroturf. That really happened, I’ll remind myself every now and then. I leapt from my seat, right on the edge of the river, drowning out the loudspeaker, the noise bouncing back at us from the fake grass. The scene is washed-out and bunched thick out of shape when I look at tape of it. It’s a little like the humidity-faded photos I stole of Mickey James and the Queen City Crew on a summer night in a park in Cincinnati.

You couldn’t really be there unless you were there.