The Cincinnati Reds’ (44-53) lose to the St. Louis Cardinals (51-47), thanks to an anemic lineup, again, 3-1 at Great American Ballpark, Sunday afternoon. That gave the Reds their third loss in the four-game series.

Their inability to score spoiled an, otherwise, impressive performance by Anthony DeSclafani (5-5, 4.12 ERA). He provided the hometown fans free pizza, all by himself, with 11 strikeouts in six innings of work. It was an unlucky second innings that doomed him, though.

Two seeing-eye singles, four stolen bases, and an error added up to two runs in the second frame, for the Cardinals. That was all the visitors would need to wrap up the series win at GABP.

The Reds stranded 12 baserunners as they finished the game 1-for-8 with runners in scoring position. Cincinnati’s best chance came in the bottom of the fifth when they loaded the bases with no outs. A pop out by Yaseil Puig, and strikeouts by Josh VanMeter and Scooter Gennett kept a goose egg on the board, though, for the home team.

The lone Reds run came off the bat of Phil Ervin in the eighth when he took Andrew Miller deep to left, after coming in to pinch-hit for VanMeter.

Joey Votto represented the tying run, in the bottom of the ninth, but was rung up by home plate umpire, Angel Hernandez. The fastball from Carlos Martinez (8th save) appeared high and outside, to Joey, but ever the lightning rod, Hernandez emphatically signaled strike three to end the game, as the Reds lose to the Cardinals.

The Cardinals added some insurance in the top of the ninth when Yairo Munoz smacked his second home run of the season off Raisel Iglesias. To be fair, Iglesias was brought in to the game in a non-save situation (5.90 ERA in those types of situations).

It also bears noting that Votto had a multi-hit game, but, again, not much going on with the lineup in this one. 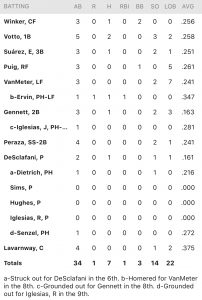