After a thrilling victory Monday night that saw the Cincinnati Reds (43-48) come from behind to beat the Chicago Cubs (50-44) for the seventh time in their last ten games against the division leader, the Reds look to win their fourth straight series against the Cubs tonight.

What’s even more rare than a single night game at Wrigley? Two night games in a row at Wrigley. But that’s what we get this week, as first pitch will again be at 8:05 ET.

On June 30, Anthony DeSclafani faced the Cubs at Great American Ball Park and pitched six innings of shut out baseball while striking out seven, earning the win in the process. It was one of his best performances of the 2019 season. He built off that start by going to Cleveland the following week and giving up only two runs in six innings, both off home runs from Francisco Lindor. DeSclafani is starting to pitch well at the right time, and has lowered his ERA from 4.70 to 4.26 in that span.

There are two reasons that can be attributed to DeSclafani’s high ERA right now. First, he had a terrible month of May, in which he had a 5.59 ERA and gave up nine home runs in 29.0 innings. He’s given up eight home runs the rest of the season. Second, he has not been a great pitcher the third time through the lineup. Yes, he’s only pitched 14.0 innings when he gets that far into the game, but he still has a 7.71 ERA and only 11 strikeouts. Once hitters have seen him a couple times, DeSclafani hasn’t been fooling a lot of people. However, each of his last two starts have been his longest starts since May 6, and in both starts, he faced 27 and 24 batters, respectively. 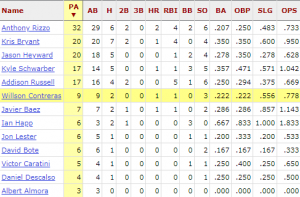 Kyle Schwarber and Javier Baez both hit DeSclafani well, but watch out for Anthony Rizzo too. He’s only 6-for-29 against DeSclafani, but has two home runs within those six hits.

The Cubs will call up Alec Mills to start tonight. Mills has not yet pitched at the major league level in 2019, and he wasn’t exactly tearing it up at Triple-A Iowa. In 80.0 innings, his ERA sits at 4.73 and his FIP is north of 5.00. It’s been the home run that has hurt him this season. He’s given up 15 home runs and his HR/9 is at 1.69. Mills has some upside though, mainly because he throws strikes and doesn’t walk a lot of batters (only 26 in 80.0 innings).

Mills pitched for the Cubs during the second half of last season. In 18.0 innings, Mills had a 4.00 ERA/2.49 FIP while striking out 23 and walking only seven. He has five pitches, but threw mostly his four-seamer, sinker, and change up in what was a very small sample size in 2018.

Both teams should have relatively well-rested bullpens. Raisel Iglesias has pitched in back-to-back games for the Reds. He could be the pitcher who gets a break tonight; however, he has only thrown 36 pitches in those two outings. I wouldn’t be surprised if, in a close game, David Bell calls upon him. And the Reds should get Amir Garrett back for the Cardinals series.

Amir Garrett was scheduled to throw a bullpen today, live BP on Wednesday, expected to be ready for Thursday

Randy Rosario is the only Cubs reliever to pitch more than one inning since the second half began on Friday, but he faced two batters last night. With the All-Star break being last week, he should still be fairly rested.

-Only five Reds players have faced Mills before and none have faced him more than three times. Scooter Gennett has two hits off Mills, while Phillip Ervin is 1-for-2.

-Yasiel Puig has been the best hitter in baseball over the last month. Hopefully he can continue hitting this way for awhile.

The catching situation may get more dire than it currently is if Curt Casali’s knee gets worse.

Curt Casali said he'd been dealing with some knee soreness and he hurt it on one of the blocks of Lorenzen in the 7th. He says he got it checked out and is fine, will play through it

José Iglesias is the Reds Heart and Hustle Award winner this season.

Is it time to find Phillip Ervin more at-bats in the Cincinnati #Reds lineup?https://t.co/4wPtWMbbxo pic.twitter.com/i84WUKHHpZ