After losing two of three to the Colorado Rockies at Coors Field, the Cincinnati Reds (42-48) start a crucial ten-game series against NL Central opponents. They currently sit 6.5 games out of first place, so it’s not hyperbole to say that this upcoming stretch can make or break the Reds’ playoff chances.

First up is a trip to the Windy City to face the current NL Central leader in the Chicago Cubs (50-43). The Cubs are coming off a three game sweep of the Pittsburgh Pirates, but the Reds have won three straight series against the Cubs.

It’s a rare night game at Wrigley Field, as first pitch is set for 8:05 ET.

Fresh off his brilliant inning of work for the National League in the All-Star game Tuesday night, Luis Castillo begins his second half of the season with an eye on the NL Cy Young award. While he sits 14th in the NL in FIP and xFIP, Castillo is currently second in ERA. He’s also 10th in the NL in strikeouts with 124, but that shouldn’t matter too much as the current front runner for the Cy Young award, Hyun-Jin Ryu, is 20th in the league in strikeouts. Most Cy Young voters look at ERA, and if Castillo can keep pitching like he’s been pitching, there’s no doubt he will get serious consideration.

Castillo has already faced the Cubs twice this season, both times at Great American Ball Park. In May, he pitched 5.1 innings and gave up two runs on two hits while striking out six and at the end of June, he gave up three hits and three runs in seven innings. While Castillo hasn’t pitched yet at Wrigley Field this season, he has made four career starts there and has a 4.05 ERA with two home runs allowed in 20.0 innings. 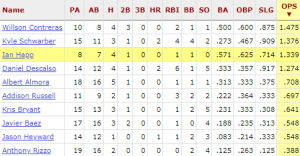 Willson Contreras is 4-for-8 against Castillo, and Kyle Schwarber and Daniel Descalso both have two home runs off him.

Kyle Hendricks has been one of the Cubs best pitchers this season. In 95.1 innings, he has a 3.49 ERA/3.51 FIP with 85 strikeouts and only 19 walks. He doesn’t walk a lot of batters and doesn’t give up many home runs, and that’s the reason for his success. Hendricks throws four pitches, but has relied mostly on his sinker and his changeup in 2019.

In June, Hendricks went on the injured list with right shoulder inflammation. He returned to the Cubs rotation at the beginning of July and has made two starts since, giving up two runs and four hits each against the Pirates and White Sox in 3.0 and 4.0 innings respectively.

Like Castillo, Hendricks has faced the Reds twice this season as well. In May, he pitched at Great American Ball Park and gave up three hits and one run in eight innings while striking out seven. At Wrigley Field ten days later, Hendricks faced the Reds again and got a no-decision for pitching six innings and giving up three runs on six hits with nine strikeouts. 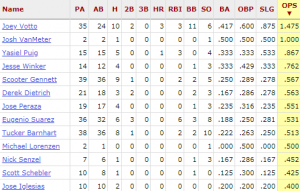 -With the Reds facing a right handed pitcher tonight, Derek Dietrich gets the start in left field.

-Joey Votto and Yasiel Puig both return to the lineup after their day off yesterday. Votto is 10-for-24 against Hendricks with two doubles and three home runs. Puig has a home run off him.

-Alex Wood is making progress on his rehab assignment.

Alex Wood is scheduled to make his next rehab start Wednesday for Triple-A Louisville. The plan is for him to throw 4 innings or 60-65 pitches. #Reds

-What should the Reds do with Puig? Click the link to read a few of our writers’ opinions.

Cincinnati #Reds question of the week: What to do with Yasiel Puig?https://t.co/ByH7zhAQSJ pic.twitter.com/O6sL37Edb1

-Lately I’ve been listening to a lot of podcasts, and the Reds podcast with Paul Dehner Jr. and C. Trent Rosecrans from The Athletic has been my favorite in recent weeks. It’s informative and entertaining. My subscription has been well worth the money (and no, I am not getting paid by The Athletic to say this).

? On today’s episode of WARP in Cincinnati ? @ctrent and @pauldehnerjr recap the latest for the Reds: