Once a baseball leaves the pitcher’s hand, he has little control over what happens next. The batter could turn a 100-mph fastball in on his hands into a bloop single. He could blister a 110-mph line drive right at the left-fielder. Luck has always played a role in baseball, but now there are more ways to quantify it.

Sometimes, a pitcher will get extraordinarily lucky for an extended period. They may walk too many hitters and give up a ton of hard contact but maintain a strong ERA thanks to a low batting average on balls in play (BABIP). Other times, they’ll pile up strikeouts and limit walks and hard contact but still give up a lot of runs. Put Reds reliever David Hernandez firmly in the latter category.

On the surface, David Hernandez’s 5.40 ERA is lousy. Even in today’s high-scoring environment — the average ERA for relievers is 4.51 — that’s less than ideal. His FIP (2.55), xFIP (3.97), and SIERA (3.52) are well below his actual ERA. Hernandez also has a 1.2 fWAR, the highest of any Reds reliever. How is that possible? Because the peripheral stats don’t point to a below-average pitcher.

(Quick note: You’ll notice Hernandez has a -0.2 WAR via Baseball Reference. FanGraphs’ WAR equation puts more emphasis on the peripheral stats like strikeouts and walks, while Baseball Reference is more results-oriented in terms of runs allowed.)

Let’s start with the first stat many people look at after ERA: strikeouts. Hernandez is sporting a strong 29.3% strikeout rate, his highest mark since the 2012 season with the Diamondbacks when he sat at 35.3%. For reference, he was at 25.6% last season. Like many Reds pitchers, he’s using his breaking balls more often to achieve this. Hernandez has increased his slider usage from 18.9% to 31.9%, and he’s missing bats more than ever. 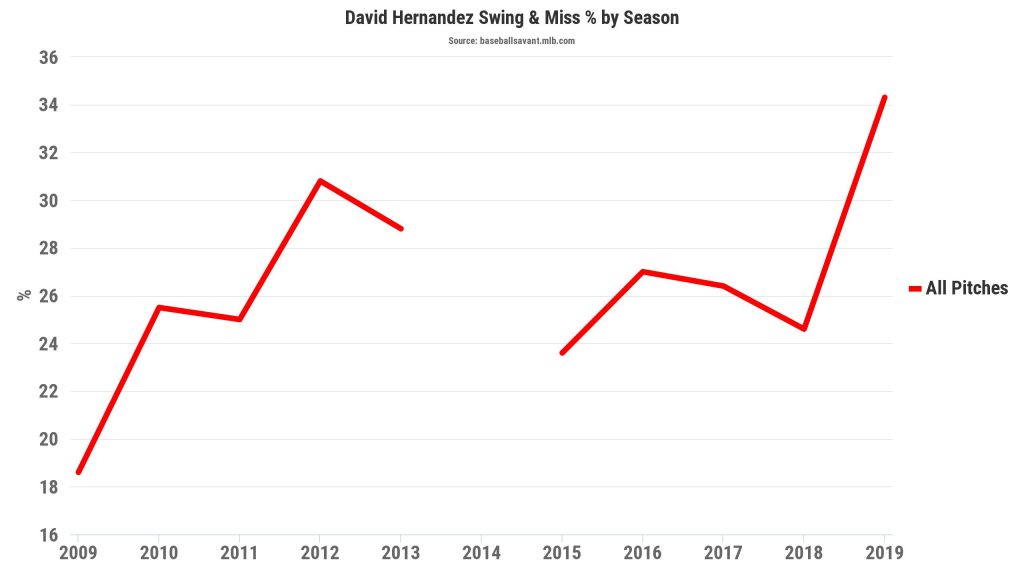 The slider is a relatively new pitch for Hernandez. He didn’t begin throwing it until 2017 when he was with the Angels and Diamondbacks. It’s a useful pitch because he’s able to tunnel it plays well off of the four-seam fastball. To the batter, the pitch looks like a fastball out of Hernandez’s hand and then breaks away.

The tunneling effect also helps his four-seam fastball get more whiffs, especially because it has an above-average spin rate (2,377, also slightly up from last year). A high-spin four-seamer appears to “rise” and batters often swing underneath the pitch. This effect plays up even more when a pitcher throws the heater high in the zone, which Hernandez has done all year. 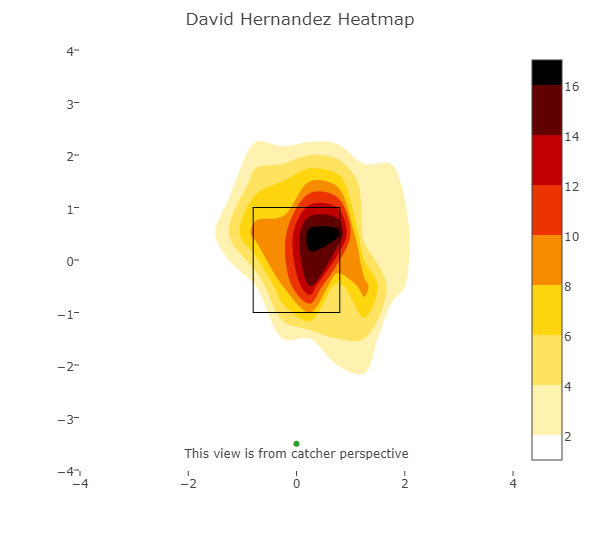 As a result, Hernandez has a 35.4% whiff rate on the four-seamer, way up from 24.6% last season. That’s ninth-best in baseball among 365 pitchers who have at least 50 swings on their four-seamers.

Why, then, is his ERA so high? The biggest culprit is, of course, sample size. With only 36.2 innings under his belt, a bad outing or two will have a more significant effect on ERA. But a lot of it comes down to the point made at the beginning of this article: rotten luck on batted balls.

Expected weighted on-base average (xwOBA) is a metric that ties all of the aforementioned factors (strikeouts, walks, exit velocity) into one clean number. In essence, it shows how a pitcher should’ve performed based on these elements. Hernandez has a .265 xwOBA, placing him in the top 9% of the league. His actual wOBA, however, is .309 — still better than average, but not in elite territory. The .044 differential is the highest among all Reds pitchers and puts him in the top 30 in baseball (min. 100 batters faced).

Hernandez currently has a ridiculously high .362 BABIP, ninth-highest among all relievers with at least 30 innings. His career BABIP is .287. Defense and the talent level of a pitcher affect BABIP to an extent. An abundance of hard contact can lead to a higher BABIP as well, which isn’t the case with Hernandez. But more often than not, a pitcher will regress to his career average. Without a significant negative change in performance elsewhere, BABIP that far above the career rate is bound to come down.

To further illustrate this, on batted balls hit less than 95 mph, Hernandez has allowed a .288 batting average. The league allows a .218 average on such balls. On balls hit at 85 mph or less, Hernandez has given up a .257; league average is .194. You get the point. Perhaps this is baseball’s way of correcting his unsustainably low .248 BABIP from 2018. But it’s not quite that simple.

The type of batted balls Hernandez allows has also contributed to the elevated BABIP. He has one of the lowest groundball rates (26.9%) in baseball. He allows a lot of flyballs and always has, but this season, he has seen a huge increase in his line-drive rate, from 20.7% to 30.1%. Line drives, of course, go for more hits than any other type of batted ball. Even line drives hit less than 85 mph still have a .616 batting average this season. Hernandez will need his line-drive rate to come down a bit for the BABIP to even out.

Still, the ball largely hasn’t bounced Hernandez’s way this season, especially over the last couple of weeks. But the underlying numbers show why David Bell continues to turn to Hernandez in important situations. If the right-hander can continue to miss bats, limit free passes, and mitigate hard contact, he should see his ERA come down the rest of the season — if fate allows it to happen, that is.