The Cincinnati Reds got the 9-game home stand off to a great start, with a 6-3 win over the Chicago Cubs. It was a team victory, with excellent starting pitching by Sonny Gray, great relief pitching by Michael Lorenzen, and ample run support by the offense. That’s a winning recipe.

Aspiration: A series sweep puts the Reds 3.5 games behind the Cubs.

In his 16th start for the Reds, Sonny Gray was strictly business, going 6.1 innings on 98 pitches. He dominated the Cubs the first two times through their lineup. The third time through, he gave up several balls to the warning track before surrendering a 2-run, 420-foot homer to Jason Heyward with one out in the sixth. Gray struck out six and walked one, Kris Bryant in his third at bat. The lead run on Heyward’s homer came on a swinging bunt (63 mph EV) by Javier Baez.

So far, Gray has vindicated the Reds confidence they had in signing him to a 3-year extension through the 2020 season. Gray’s strikeout rate (26.7%) is well above league average of 22.8%. Gray’s ground ball rate (55.9%) is the highest of his career and well above league average. Before tonight, Gray’s ERA was 4.03 (now down to 3.94). But it’s important to remember the run environment context. League average ERA is 4.47. So Gray has pitched 10% better than average. Adjusting for fielding and luck, Gray has been about 20% better than MLB average.

Gray got the first five outs of the game on strikeouts, mainly thanks to his curveball. Anthony Rizzo swung at a curve in the first inning that bounced in front of home plate.

Sonny Gray's curveball has six swings and misses through two innings. His season high on the pitch in any game before tonight was five. He's dealing.

Gray’s curve has a 7.2 in horizontal and 3 inch vertical break. That’s due in large part to his spin rate of 2910 rpm, which is in the top 5% of all baseball. Here’s a movement grid of curveballs for all starting pitchers. The red arrow points to Sonny Gray. The farther into the bottom right corner, the better. 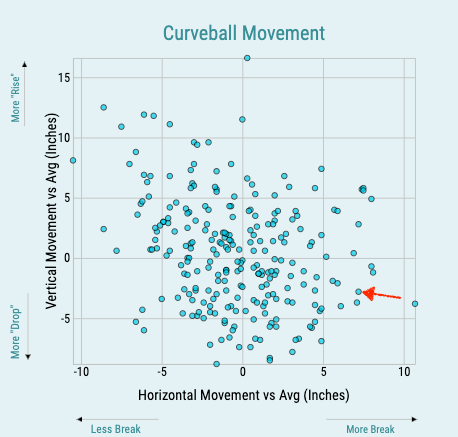 David Hernandez relieved Gray in the seventh. He gave up an extra-base hit down the left field corner that somehow got played into a triple. The extra base cost the Reds a run when Albert Almora hit a sacrifice fly.

Amir Garrett pitched the 8th. After getting Middletown’s Kyle Schwarber to line out, he walked Kris Bryant and hit Anthony Rizzo. David Bell lifted Garrett for Michael Lorenzen. The score was 6-3 with the tying run at the plate.

Lorenzen’s job wasn’t easy. He had to face Javier Baez and Willson Contreras, two 2019 All-Star starters. Lorenzen needed just five pitches – four fastballs and one slider – to induce two routine ground balls and the Reds were out of trouble.

Lorenzen came on to finish the game in the 9th. Jason Heyward led off the ninth with a 346-foot line drive to right field that Yasiel Puig leapt up to make a great catch before crashing into the wall. Kinda felt sorry for the wall on that one.

Lorenzen struck out Addison Russell and Victor Caratini to end the game.

Lorenzen threw his change-up five times, for four swings and misses. Matt Wilkes wrote about the importance of Michael Lorenzen adding an off-speed pitch to his portfolio this year.

“Rather than relying on the slider with two strikes, he’s throwing it early in counts. Meanwhile, he has developed a better putaway pitch: the changeup. It was a strong swing-and-miss pitch for Lorenzen last year (36.6% whiff rate), but he barely threw it (7.4%). He’s using it more in 2019 (16.5%), and it’s getting whiffs nearly half the time batters swing at it. Here’s the league leaderboard in whiff% among all pitchers who’ve gotten swings on at least 50 changeups:

Indeed. Three saves for Lorenzen in the last three opportunities.

Joey Votto had four hits tonight, including number 1800 for his career. The 35-year-old also swiped second base. Hit 1800 drove in Nick Senzel.

He walked in his fifth plate appearance to make it a perfect Joey Votto night.

Turns out Joey Votto is still pretty good at this baseball thing. pic.twitter.com/8XAMQZrJ4X

The Reds got to Cubs starter Cole Hamels in the first inning for a run and it could have been more if Jason Heyward hadn’t made a great play on a line drive in the RCF gap from Nick Senzel. Hamels left the game before throwing a pitch in the second inning due to injury. Joey Votto singled, Eugenio Suarez drew a walk, Yasiel Puig lined a single to right field, loading the bases. Jose Iglesias hit a routine double-play ground ball, but Puig barreled down the base line and was on top of Cubs 2b Addison Russell. Russell couldn’t make the throw to first. A run scored.

Philip Ervin greeted Mike Montgomery, who came on to pitch for Hamels, with a 385-foot home run, making the score 2-0.

Later, Ervin doubled to right center. The double was a harder-hit ball than his home run (99.5 mph vs. 103.7 mph). With two more games against LH starting pitchers, you wonder if Ervin will get those starts in LF. Other options include Jose Peraza and Jesse Winker.

Nick Senzel had a good night at the plate, with a double and a walk. The double drove in two runs in the 4-run 4th inning. Senzel did make a base running mistake. He walked, then stole second. But on a line drive by Votto into centerfield, Senzel waited to see if the ball fell in for a hit despite there being two outs. It cost the Reds a run.

From Bobby Nightengale of the Cincinnati Enquirer:

The #Reds didn't announce a timetable but Tucker Barnhart could miss a month with his oblique injury. Barnhart plans to keep contributing in game-planning meetings. https://t.co/o8ua2cADMw