Coming into 2019, none the talk surrounding Michael Lorenzen concerned his primary job: pitching. There was plenty of hype about Lorenzen spending more time playing the outfield and hitting. So far, he hasn’t done much of either — he has logged only 13.1 innings in the outfield and 10 plate appearances. That may be disappointing to some Reds fans, but Lorenzen has more than made up for it on the mound.

In 35 games and 39.1 innings, he has allowed a 2.97 ERA with a respectable 3.81 FIP and 3.73 xFIP. While the ERA gone down from last year (3.11), the other two numbers have shown more significant improvement (4.16 FIP, 4.46 xFIP in 2018). That’s important because it makes his 2019 performance more sustainable. Even if his ERA regresses toward the fielding-independent metrics, he’ll still be a well above average reliever

Why have his peripheral numbers improved so much? The answer is simple: more strikeouts and fewer walks. Every pitcher wants to accomplish this, but it’s easier said than done.

Lorenzen had a career 18.6% strikeout rate and 9.7% walk rate coming into 2019, both below average rates. Those numbers aren’t much better if we isolate them to relief appearances only (20.7 K%, 8.9 BB%). The troubling part was Lorenzen’s strikeout and walk rates were headed in the wrong direction, too. In 2018, he posted a 15.7 K% and 9.9 BB%. Lorenzen did make three starts at the end of last season, and his strikeout rate was even lower in those outings, which is to be expected. As a reliever, though, his strikeout rate was only 17.1% and his walk rate was worse (10.1%). Among 147 relievers with at least 50 innings pitched last season, only 14 had a lower strikeout rate.

This drop-off began in 2017 before it fell off the cliff last year. Between 2016 and ’17, his strikeout rate fell from 23.8% to 22.2% and the walk rate increased from 6.4% to 9.4%. Not only was he struggling to throw strikes in 2018, but he also wasn’t fooling hitters into whiffing at his pitches. Take a look at the sharp decline in swinging-strike rate for Lorenzen last season (for reference, the 134th game was the start of the 2018 season): 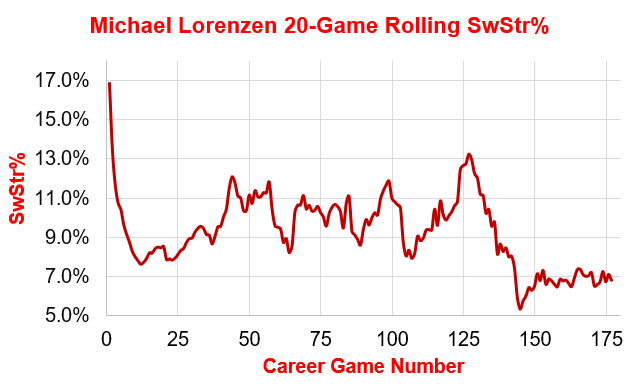 To put all of this simply: Lorenzen’s ERA was unlikely to stay that low in 2019 if he couldn’t miss more bats and throw strikes. What caused such a steep decline, and how has he turned it around this season?

The best place to look is the pitch mix. 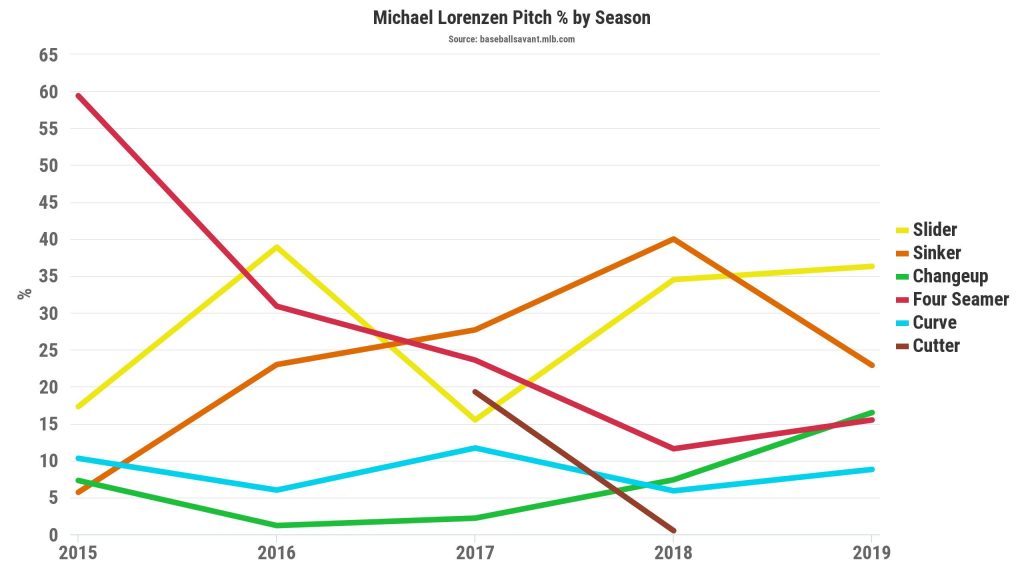 Lorenzen threw more sinkers and sliders in 2018 and fewer four-seamers. There was a marginal decrease in curveballs and increase in changeups, but this likely wasn’t the source of his problems considering they were still thrown less than 10% of the time. The increase in sliders may have been a change in Statcast’s pitch tracking system. Other systems, including Pitch Info — who provides the data seen on FanGraphs and Brooks Baseball — interprets Lorenzen’s slider as a cutter. Given the drop in cutters from 2017 to 2018, Statcast may have simply lumped the pitch with Lorenzen’s slider because it has similar speed and movement. (This is certainly the case in 2019, as his slider velocity has suddenly jumped from 89 to 92 mph, and Statcast hasn’t registered a cutter.)

That leaves fastball usage as the biggest change from 2017 to 2018. Lorenzen reduced his four-seam usage from 23.6% to 11.6% and used his two-seamer more (27.7% to 40.0%). The results against the four-seam fastball were about the same as they were in 2018, but average exit velocity went down and the whiff rate went up. The two-seam fastball did not fare as well.

Lorenzen’s two-seamer was a heavy groundball pitch early in his career when he threw it less. But as he started using it more, its effectiveness dwindled. Its GB% fell from 65.2% to 50.9%. Of course, that meant more line drives (i.e., hard contact).

The problem came almost entirely against left-handed hitters, who batted .321 (.294 xBA) and slugged .500 (.444 xSLG) against it. Righties sat at a .194 average (.240 xBA) and .239 slugging percentage (.352 xSLG). The two-seamer runs toward right-handed hitters (away from the barrel of the bat) and away from lefties (toward the barrel of the bat). Lorenzen also lost three inches of horizontal movement on the two-seamer between 2017 and ’18, taking it from above average to below average break.

Two-seamers/sinkers, overall, are falling out of favor league-wide. The focus on launch angle has made living low in the zone more dangerous. Batters aren’t hitting fewer groundballs against the two-seamer, but they’re doing more damage than ever before when they put it into play — even when compared against a four-seamer. The problem gets compounded because two-seamers get fewer whiffs than any other pitch. In an era where home runs are at an all-time high, missing bats is imperative.

That, naturally, leads us to Lorenzen’s tanking strikeout rate. The two-seamer’s whiff rate — the percentage of misses on all swings — was a paltry 9.9% last year. It significantly dragged down his overall whiff%. But the slider also went in the wrong direction. Its whiff rate was cut in half, falling from 36.3% to 18.9%. The pitch’s velocity went up from 88.1 to 89.8 mph and came at the cost of movement. The slider moved 1.4 horizontal inches above the league average in 2017; it fell to 2.1 inches below league average in 2018.

The two-seamer and slider were his go-to pitches when he was ahead in the count. 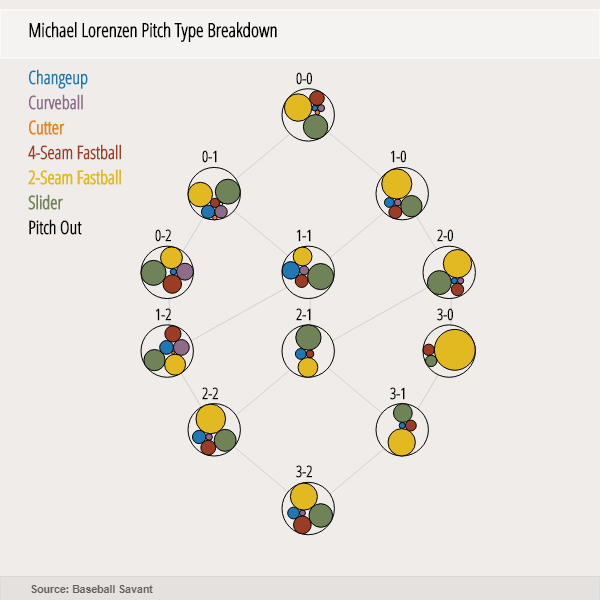 Add it all up and you have a plummeting strikeout rate.

Under Derek Johnson and a new coaching staff focused on analytics and data, Lorenzen has turned it around in 2019. His whiff rate has risen from 16.8% to 27.8%. While he still throws the sinker, which hasn’t regained its former propensity for groundballs, he’s cut down its usage to 22.9%. Against lefties, the percentage has fallen from 42.2% to 18.9%.

Lorenzen has also increased his four-seam usage from 12.% to 17.5%. He’s throwing his heaters about 1.5 mph harder, pushing him into the 94th percentile in average fastball velocity. His four-seamer’s spin rate sits in the 77th percentile. The result? You guessed it: more swings and misses. 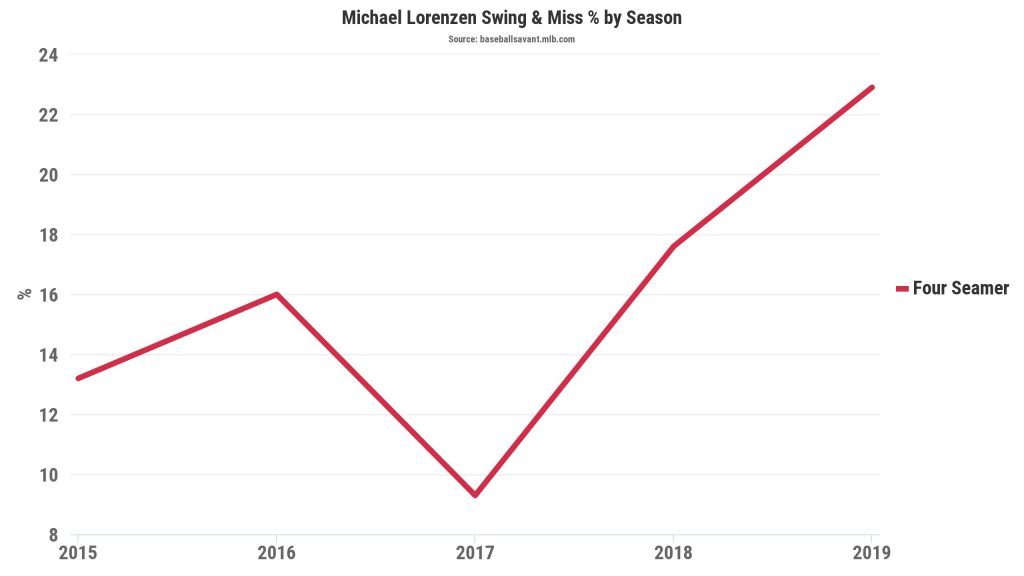 But the additional four-seamers aren’t the full story. Many Reds pitchers have started to use their best pitches more often, another sign of Johnson’s impact. Amir Garrett and Robert Stephenson are two notable examples out of the bullpen. Both have thrown their sliders on over 50% of their pitches and are among the league leaders in strikeout rate as a result. This doesn’t quite apply to Lorenzen, but he is throwing his best swing-and-miss pitch more often. Lorenzen’s best option was formerly his slider, but it hasn’t regained its movement from two years ago. Its whiff rate (26.0%) is up but still not at 2017 levels. He’s still throwing it a lot — more than any other pitch, in fact — but he has changed when he throws it.

Rather than relying on the slider with two strikes, he’s throwing it early in counts. Meanwhile, he has developed a better putaway pitch: the changeup. It was a strong swing-and-miss pitch for Lorenzen last year (36.6% whiff rate), but he barely threw it (7.4%). He’s using it more in 2019 (16.5%), and it’s getting whiffs nearly half the time batters swing at it. Here’s the league leaderboard in whiff% among all pitchers who’ve gotten swings on at least 50 changeups:

Lorenzen can partly credit more whiffs to additional horizontal movement. The changeup was -0.3 inches below average last season and is 1.1 inches above average this season. He also gets 9.4 mph of separation between his average fastball and changeup. Among 300 pitchers who thrown at least 25 changeups this season, Lorenzen ranks 50th in velocity differential.

With this improved weapon, Lorenzen has a new pitch to use when he gets ahead in the count. Just over 60% of his changeups have come in two-strike counts. 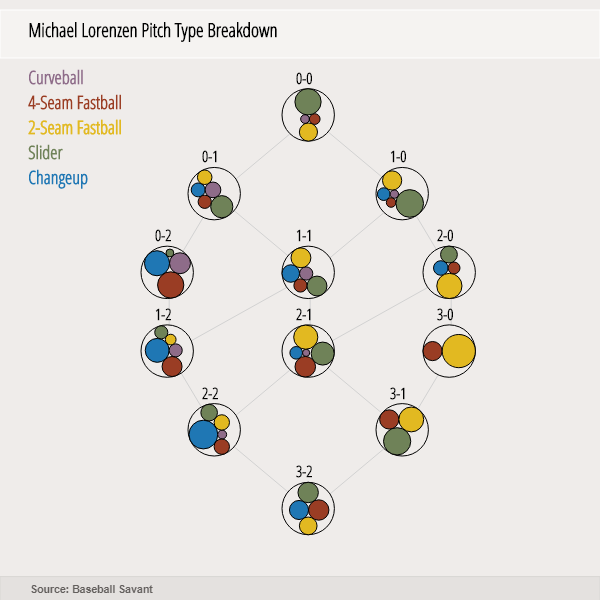 Just as important: Lorenzen has almost completely stopped throwing two-seam fastballs in these strikeout situations. He’s throwing it in only 10.5% of two-strike counts as opposed to 34.1% last season.

Unsurprisingly, Lorenzen has been one of the vocal proponents of the analytics movement brought on by the new Reds coaching staff. From a story by The Enquirer’s Bobby Nightengale in early May:

“It’s one of the examples why I love our new staff,” Lorenzen said. “They want to be cutting edge. They want to be at the front of everything. That’s what we need to do.”

With Lorenzen’s raw stuff and loads of new data at his fingertips, it will be interesting to see what else he can get out of his right arm as he continues to work with Johnson.