Last night game was a shocking win, not in the sense that the Reds won against a very good team, but that the Reds won a game they had absolutely no business winning because of all the erroring and not-so-great offense. They don’t usually manage that kind of thing. I mean, I expected a loss, and preferred a win, but was fully to terms with a loss in a game in which I turned on the radio, heard Jeff Brantley say “That was ugly to watch,” and immediately turned it back off. Which means that tonight they will probably try very hard and make zero errors and probably lose anyway,  giant predator bobblehead giveaway notwithstanding.

Speaking of, this on the Reds website looks 100% like a WWII planespotting government information poster and is likely the result of death threats against poor defenseless ticket scanners: 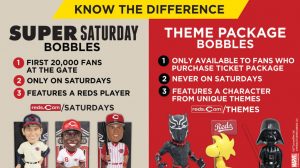 Last night Jeff Piecoro said that DeSlcafani was “geeked” about pitching against Verlander, which… I… guess?

Justin Verlander was born in 1983, the same year Elizabeth Dole was nominated as Secretary of Transportation. Maybe this is what’s so exciting for DeSlcafani?

There was Much Discussion yesterday after Bell lifted Iglesius in the 9th because he was–get this– not pitching well. Certain juvenile people (okay, me) who navigated the charity telethon obstacle course that was Fox Sports Ohio’s broadcast yesterday hoping to see some verbal hand grenades were not gratified. Iglesias was humble, adult, and understanding; in other words, really disappointing from a Twitter perspective.

No issues: Raisel Iglesias understood David Bell's decision to go to Michael Lorenzen with one out in the 9th.#BornToBaseball | @Reds pic.twitter.com/OwxCN5JVXy

The ouster was thrilling in its implications of what is to be tolerated and what is not. Marty liked it; Cowboy liked it; Aunt Beth liked it. Price gingerly attempted this sort of thing in the first few days of his tenure– remember, all the winning?– but then apparently A Conversation Was Had and he went back to the Dusty Baker Anti-Sparky School of Leaving the Pitcher In Because Watching the Ball Sail Over Everyone’s Head Is Good Neck Excercise and we all know what the ultimate outcome of that was.

-Scooter was 0 for 2 with a walk in yesterday’s minor league return. THIS REHAB IS A DISASTER.

To expand on this a little bit more, I've also been told that Scooter Gennett will return to the lineup on Thursday. Daytona has a 1035am morning game tomorrow. They hit the road on Thursday. https://t.co/3DIiRMfHcZ

-Eagles eat sloths. Sometimes they’ll snatch them right up out of a tree.