Your Cincinnati Reds are in last place again, although their meteoric rise to fourth was thrilling while it did so last. Also I shouldn’t be straining at the leash to be in Colorado if only to get warm and dry in the third week in June, but that’s the 513 experience we’ve chosen. Live it.

Tonight is Bark in the Park, because if anything is going to improve on last place and a probable pending loss, it’s the smell of many wet dogs. Tomorrow Sam the Bald Eagle comes in from the Cincinnati Zoo to lift moods by ripping out the intestines of his helpless prey before the eyes of innocent children.

“Wade Miley” sounds like the name of a romantic comedy heroine’s boyfriend who is nice and all but is going to get dumped to clear the way for Tom Hanks. 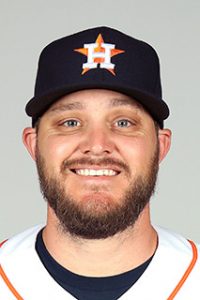 Remember when the Astros were in the National League, and could be trusted, and didn’t use the DH? I liked life better then. The last time I was in Houston, I snapped a picture as Josh the Pilot and I drove past Minute Maid Park so that I could tell everyone on social media that I was “mocking the Astros at point-blank range.”

The Reds were not in last place, in case you’re wondering how long ago this was.

-Scooter Gennett begins a rehab assignment with the Daytona Beach Tortugas today! RN’s Doug Gray has all the info here. Then Scooter will come back and everything will be fixed.

If you’re reading this, Scooter, I used to live in Daytona, and am familiar with its many fine establishments. If you’re looking for a shot glass with a picture of a giant marijuana leaf on it over the words MY STASH or a dead hermit crab preserved in a serving tray, allow me to provide you with some recommendations.

-In other important team developments, Derek Dietrich posted a series of photos and videos of him making the Puig Goodwill Tour: Skyline, Graeter’s, giant expensive Ferris wheel, the zoo. He also fed Fiona. I readied a screenshot of this last moment but got stuck on the caption:  did he get to meet Fiona, or did Fiona get to meet him? Ultimately I decided that Fiona’s future here is far more stable than his, although I would like to be alerted the next time she manages three home runs in one game.

-This weather deeply offends me.

This weather deeply offends me pic.twitter.com/QD7w7LToBE