Before the season, everyone wondered whether Luis Castillo could turn his potential into reality and become the Reds’ next ace. Through two months, that transformation has occurred. Coming into Tuesday’s start against the Indians, the right-hander had a 2.38 ERA, 3.42 FIP, and 3.46 xFIP. His 1.7 fWAR is already closing in on last year’s total (1.9). His 2.8 bWAR ranks 8th among all MLB pitchers. Only Dakota Hudson has a better groundball rate than Castillo (59.8%).

But there’s one area Castillo still needs to work on to truly belong in the elite category: his walk rate. Among all qualified pitchers, only two (Yu Darvish and Aaron Sanchez) have issued a higher rate of free passes than Castillo (11.8%). It’s an issue Castillo didn’t deal with in his first two seasons. While his walk rate was slightly above average in 2017 (8.9%), it wasn’t particularly worrisome. Last season, he dropped that number to 6.9%, well below the league average.

It’s not a dramatic difference, but there’s a shift away from the middle of the plate toward the bottom of the zone, which has also brought up his groundball rate.

But Castillo has less room for error. His percentage of pitches in the strike zone has plummeted from 51.0% to 38.7%. Opposing teams are starting to catch on to this pitching approach and are swinging less often against him as time goes on. 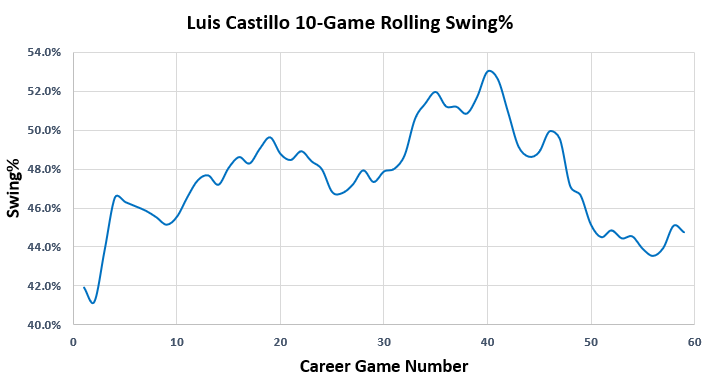 Castillo is throwing 4.1 pitches per plate appearance this season, up from 3.9 last year and a direct result of the uptick in both strikeouts and walks. Additionally, he’s gotten into a full count on 16.7% of his plate appearances, a leap from 13.1% in 2018. The right-hander is still missing enough bats that this dip in overall swing rate hasn’t hurt him tremendously. His swinging-strike rate of 14.6% is eighth-best in baseball, just ahead of pitchers such as Jacob deGrom and Chris Sale.

Is this a conscious approach by Castillo to stay away from the sweet spot of the strike zone, or is he having trouble hitting his spots? It’s probably a bit of both. The changeup and slider are typically chase pitches. In a lot of cases, the goal isn’t to throw them in the strike zone. But pitchers have to establish their fastball in the zone to bait batters into swinging at balls.

The four-seam fastball has seen the biggest drop in Zone% for Castillo this season, falling from 54.0% to 41.7%. It’s hard to blame him for this. He gave up 13 home runs with the pitch last year, and it was hit at an average exit velocity of 90.3 mph. Although he throws the pitch hard, its average spin rate keeps it from fooling hitters and initiating whiffs. Pitchers such as Max Scherzer and Justin Verlander frequently throw fastballs in the middle of the plate and succeed because hitters swing underneath their high-spin four-seamers.

Castillo is staying out of the heart of the zone with the four-seamer this year, which is good. But that hasn’t resulted in more pitches on the edge of the strike zone. Instead, he’s throwing more fastballs in the chase and waste portions of the zone. That’s problematic because a four-seamer’s movement isn’t conducive to tricking the opposition into swinging at bad pitches.

Because he’s staying out of the heart of the plate with the fastball, hitters aren’t teeing off against it anymore. He’s holding them to an 86.6 mph exit velocity and an expected isolated power of .174 — a vast improvement over the whopping .270 xISO from 2018. But he’s also getting far fewer swings (32.2% vs. 43.4%). Given that he throws the pitch over one-third of the time, it’s a huge reason his walks are up.

If Castillo struggles to paint the edges with his four-seamer and maintains that usage, it presents an interesting problem. One conceivable way he can still live in the strike zone with success is throwing four-seamers high, where it counteracts the “launch angle” approach and hitters will have a harder time catching up to it. Castillo is already one of the Reds pitchers who has increased his usage of high fastballs this season. Four-seamers in the upper portion of the zone (which I’m defining as zones 1, 2, 3, 11, 12, 13, 21, 22, and 23 of the Attack Zones defined by Statcast) have a .303 xwOBA this season league-wide. Pitches in the middle and lower portions (zones 7, 8, 9, 17, 18, and 19) have a .411 xwOBA.

Why doesn’t Castillo do this even more? It’s likely because lower fastballs help him disguise his wicked changeup more effectively. The changeup is intended to be thrown low in the strike zone, where it dives under bats. While consistently throwing higher fastballs could make his changeup easier for batters to identify, it hasn’t had an effect thus far with his uptick in high fastballs. The changeup is better than ever.

This, of course, is just spitballing a solution and not the professional opinion of a pitching coach. Perhaps all Castillo needs is a slight mechanical tweak to better command his four-seam fastball. If he figures out how to throw it for strikes consistently without leaving it in the heart of the plate, though, watch out. It’ll go a long way toward bringing down his walk rate and transforming him into a legitimate ace.