After back-to-back losses, the Cincinnati Reds (28-34) need a win in the worst way. They will try to get that win in the second of this weekend series against the Philadelphia Phillies (36-27) at Citizens Bank Park.

Tanner Roark did not fare very well last Saturday against his former team in the Washington Nationals, giving up four runs on six hits over six innings. He struck out six and walked one in that start. It was his first below average start in over a month. I don’t think most fans thought Roark would be as good as he has been thus far in 2019. He’s always been a middle to back end of the rotation pitcher. This season, he’s been a solid pitcher who has been able to pitch at least five innings every start except two.

There are two reasons Roark has been so consistent this season. First, he’s not allowing home runs. He’s given up just four home runs all season. Second, his K% is up to 24% from 19.2% a year ago and 21.4% in 2017. He’s striking out more batters. Roark’s slider usage, like most other Reds pitchers this season, has jumped up about six percent. He’s gotten 10 strikeouts with his slider already. He had 17 strikeouts with his slider all of last season.

From his time spent in the NL East, Roark has faced most of the Phillies players many times. He will, however, face his former teammate Bryce Harper for the first time. 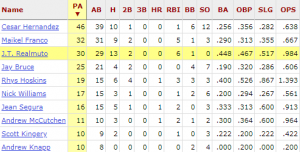 After a 4.77 ERA/3.80 FIP in 164.1 innings in 2018, Nick Pivetta was sent to Triple-A Lehigh Valley in mid April after he gave up 17 runs in four starts to start the 2019 season. At Triple-A, he made six starts, posting a 3.41 ERA with 50 strikeouts in 37.1 innings. The Phillies recalled Pivetta at the end of May. In his most recent start, he pitched maybe the best game of his short career, throwing six scoreless innings and striking out nine at Dodger Stadium.

With a career 45.4 GB% rate, Pivetta is more of a ground ball pitcher. However, he does have a 23.3% HR/FB rate this season, and a career 17.7% HR/FB rate. While he induces ground balls, he also makes mistakes over the plate, and major league hitters capitalize on them.

Pivetta is essentially a three-pitch pitcher. While he has a change-up, a cutter and a sinker, he very rarely uses them. Mostly he throws a four-seamer, a curve, and a slider. In the last year, the usage of his curve ball has steadily increased. That means he’s getting even more used to throwing his curve where he wants it. It is effective for him too, as batters have struck out 14 times against it.

(Frustrating) Stat of the Day

Last night’s loss means the Reds have lost 23 games by two runs or less, which leads the majors. It’s stats like this that are frustrating. The Reds are so close to playing winning baseball, but haven’t quite turned the corner yet.

-Derek Dietrich and Eugenio Suarez each have a home run off Pivetta.

-Scooter Gennett is close to returning, as are Alex Blandino and Alex Wood.

Scooter Gennett will start his rehab next week, Alex Blandino is already on his rehab assignment, and Alex Wood sounds like he could be getting close to his for the Cincinnati #Reds – who could be healthy with a quicknesshttps://t.co/S2n0MEJTyy pic.twitter.com/BC60EcMxb0

-Here’s how the Reds minor league teams did yesterday:

Miles Gordon had a huge night, reaching base 5 times and homering in a Dayton Dragons win on Friday.https://t.co/2TVlky97sO pic.twitter.com/nI8rh4e80n