My dears, entering today’s date at the top of the post was a solemn exercise. We are blessed that the bloody military operation which took place 75 years ago today, victorious at such great cost, was a successful one. How many of us and our parents wouldn’t be here today were it not for those 18-25 year olds who jumped out of the airplanes, waded from the landing crafts, or kept the supplies running? And here is their granddaughter, typing about baseball beneath increasingly clearing skies as the occasional robin sifts through the clover outside my office window. At the moment my nephews are gathered without fear for Mass at their clean and well-stocked school.

Not so long ago, and not at all because I deserved either, I was offered a choice between a tour of Versailles or a trip to Normandy and Omaha Beach  One promised ordered flowers and gilt mirrors and some of the best beauty fashioned by human hands. The other, however, was mandatory. If you are ever blessed with an opportunity to visit France, get out of Paris. (The ones accompanying this reflection were taken just before the age of decent cell photos, but they are an accurate reflection of what I saw, and humanity in all its shadows and inability to fully comprehend the magnitude of what happened there were the order of the day.)

Now I warned everybody yesterday not to start with me, and so they didn’t. Although we’re still waiting on a date for the rematch, this could mean good news for the Redlegs later in the season as we face down a division rival in the mighty struggle to avoid last place.

The rainout doesn’t affect the pitching rotation since the game never started. Since I last offered my expert evaluation of Mr. DeSclafani’s body of work, I have acquired Advil and some cake frosting, and have upgraded my assessment from “we’re going to lose” to “maybe we’ll lose.”

Yesterday, based on careful study of Dakota Hudson’s stats, I announced that judging by the name, is either a pole dance instructor or the latest baby name trend out of Hyde Park. Bill Hedges The Reader supported my judgment by commenting that “judging by the pole dancer instructor reference – we should get plenty of singles tonight.” I awarded him one (1) gif of people applauding.

I don’t want to type about the bullpen because Dietrich is starting and that means the chances of seeing some of his awesomeness against St. Louis, in St. Louis, are greatly increased. The other day he posted a video of the visitor’s clubhouse, sharing goat in a Tupperware dish with Joey Votto. Dietrich included an emoji of a goat BECAUSE HE WAS EATING GOAT WITH THE GOAT WHO ELSE GETS TO DO THAT??!!?!?!

PUIG, that’s who. Puig is also in the video with the goat and the GOAT. You guys, 99.99% of the time, social media is a life-draining garbage canal which offers zero human uplift. The other .01% is Deitrich, Joey Votto, and Yasiel Puig eating a goat.

-For no particular reason, here is a very awesome picture of Opening Day at Crosley Field in 1941. 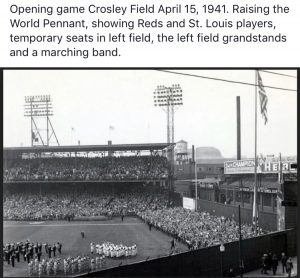 Right. In. Their. FACES.