A lot of the talk among fans this season has centered around Joey Votto’s slow start. Some wonder if this is the start of the decline; while others tell everyone to stay patient. He’ll get back to being Joey Votto soon enough. While he hasn’t yet looked like the Votto we all know and love, he has steadily improved through the first two months.

Votto’s plate discipline has always been far above league average. It’s what defines him as a player. In March, MLB.com published a story about Votto’s plate discipline. The writer shows that despite Votto’s lack of power in recent years, his ability to avoid swinging at pitches out of the strike zone remained. (Note: Votto’s season wasn’t terrible in 2018; his 131 wRC+proves that. Compared to his standards, it was).

However, this season has been different. The very thing that made him excellent at his craft the last two seasons might be a reason for his struggles in 2019.  Votto’s swing% is up to 42.0%, from 39.7% a year ago. That’s not a huge increase, but it shows he’s swinging more this season. His O-swing% is up to 20.5%. It was 16.4% and 15.8% in 2018 and 2019, respectively. The largest gap in Votto’s stats comes from O-contact%. On pitches he swings at out of the zone, he makes contact 65.7%, a dramatic decrease from the 78.4% a year ago. The good news is that on pitches he swings at inside the strike zone, his numbers are fairly steady in the 80th percentile.

Trouble with the Changeup 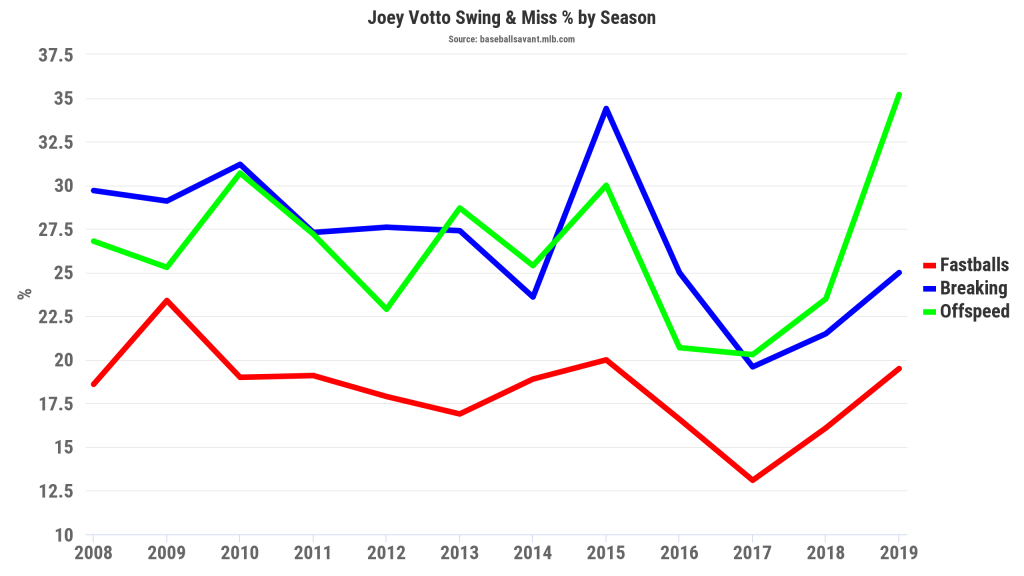 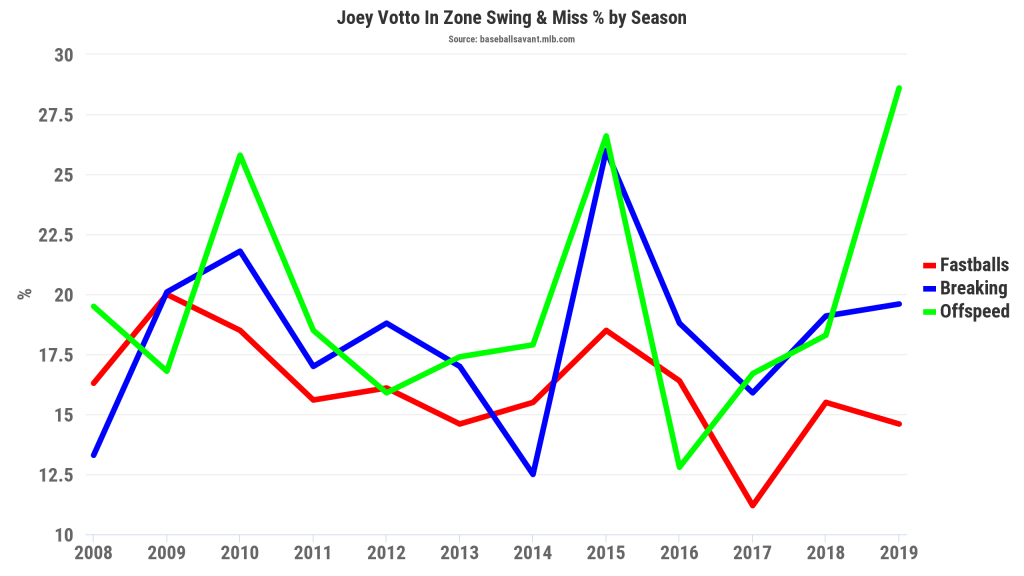 So, why is Votto struggling to make contact with the off-speed pitch? It could be that he’s simply struggling to see it as it approaches the plate. It could also be that pitchers are pitching to him differently than in previous years. He’s seen a change up from opposing pitchers 12.2% of the time, up from 9.9% last season. He’s also seeing more split finger pitches, as that’s jumped from 0.7% in 2018 to 1.9% in 2019. 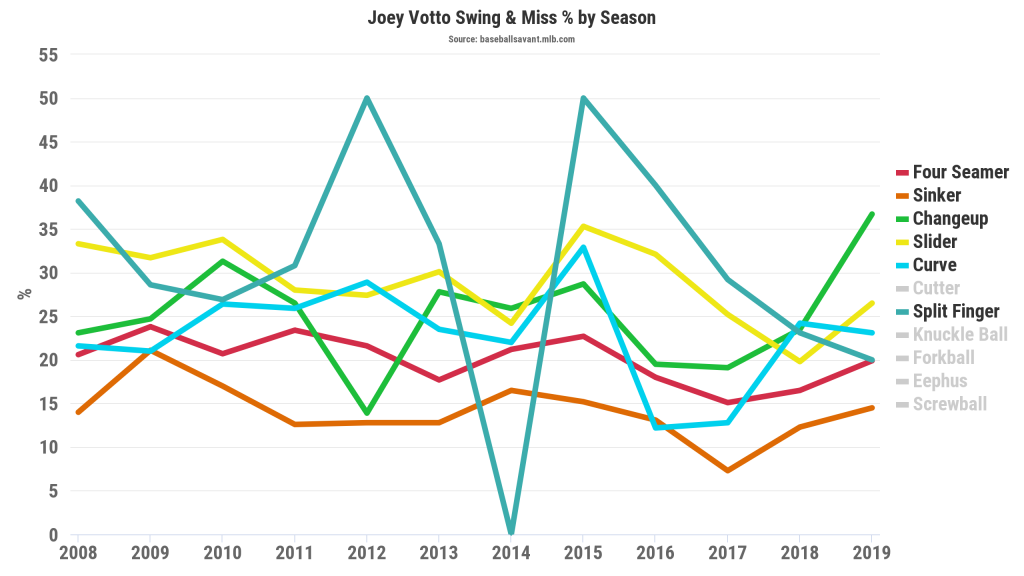 Breaking the swing and miss% charts down even further into individual pitches, it’s very noticeable that the reason for Votto’s jump in his swing and misses on off-speed pitches is the change-up. Aside from the 2012 season, it’s always given him a little bit of trouble. This season, that has been his trouble pitch, more so than the slider and curve.

It’s frustrating to watch the strikeouts, but I guarantee Votto is the most frustrated of anyone. He will likely get it figured out, and at the end of the season, his stats will look similar to his career stats. In fact, that’s already happening. In Votto’s last 50 plate appearances, he’s below the league average for strikeouts. He’s hitting .429/.447/.514 with a .962 OPS and only six strikeouts in the last 14 days. The on-base streak keeps climbing. And he has less strikeouts on change ups. In April, he struck out eight times on change ups. In May, he struck out only four times. There’s a reason Votto is considered one of the best players in baseball. He knows how to prepare and adjust to whatever pitches that pitchers are throwing to him. It just might take him longer than a week or two.

All statistics current as of June 3, 2019. Stats courtesy of Baseball-Reference, Fangraphs, and Statcast.