Every pitcher’s goal is to get outs, and deceiving hitters is the best way to do so. Some do it with gravity-defying movement, while others do it with herky-jerky mechanics. The concept of pitch tunneling has also gained steam in recent years.

But one of the simplest ways to fool hitters — at least on the surface — is by giving them less time to hit the ball. Pitchers can do that by getting a lot of extension; that is, they release the ball closer to home plate, cutting down the hitter’s reaction time.

A 95-mph fastball is already tough to hit. It’s estimated that a pitch that speed takes between 425 and 450 milliseconds — less than half a second — to reach home plate after it leaves the pitcher’s hand. If pitchers can make the heater appear even faster by releasing it closer to home plate, it conceivably becomes more difficult to hit because reaction time is further reduced.

Statcast attempts to measure this principle with a statistic called “perceived velocity.” Their definition of the metric:

“Perceived Velocity is an attempt to quantify how fast a pitch appears to a hitter, by factoring the Velocity of the pitch and the release point of the pitcher. It takes Velocity one step further — because a 95 mph fastball will reach a hitter faster if the pitcher releases the ball seven feet in front of the rubber instead of six.”

Taller pitchers have an easier time doing this, although pitchers of more average height can do it as well. When taking perceived velocity and subtracting actual pitch speed — thus showing how much “faster” the ball appeared to the hitter — on fastballs this season, the vast majority of the top 10 are well above average in height.

Glasnow is the poster child for perceived velocity. He already throws hard, averaging 96.6 mph on his fastball. But with his long wingspan, he gets 7.61 feet of extension toward home plate on the average delivery, by far the highest in baseball. That means the ball is released 52.89 feet away from home plate. As a result, his fastball’s perceived velocity is 99.4 mph. The 2.77 differential between actual and perceived velocity is the highest in baseball by a huge margin. The next closest pitcher (Barlow) is at 1.38, and only seven pitchers other than Glasnow exceed even 1 mph.

Does this carry any meaning? Yes and no.

Let’s start with the no part. Because there’s often little difference between actual and perceived velocity, they usually tell the same story. A pitcher who gets a lot of extension may get knocked around regardless if their command is poor. Wacha ranks ninth in Perceived-Actual Velocity, but he throws only 48.5% of his fastballs in the strike zone. Most importantly, though, the perceived velocity is still just 92.3 mph — more than hittable for a major-league batter.

At the end of the day, for a pitcher who throws 92 mph, a perceived velocity of 92.5 mph may not make a huge difference. Of the 174 pitchers who’ve thrown 500 fastballs this year, 47% have a perceived velocity within 0.5 mph of their actual velocity. This problem showed itself in a study conducted by Driveline Baseball, which found little correlation between perceived velocity and xwOBA (expected weighted on-base average) on batted balls and swinging-strike rate, among other metrics.

Take former Reds pitcher Homer Bailey as another example. His perceived fastball velocity (93.1) is 0.5 mph higher than his actual velocity (92.6). Yet, his fastball has been smashed for a .338 expected batting average and .449 xwOBA. Both marks rank in the bottom 20% of all pitchers in the sample.

At the end of the day, faster fastballs will get better results.

That said, this information about perceived velocity isn’t meaningless. It does make it harder for hitters to put the bat on the ball. Pitchers in this data set get an average of 6.1 feet of extension. The league average swinging-strike rate on fastballs for pitchers at or above that mark is 10.6%. That drops to 9.4% for pitchers with below-average extension. That’s not insignificant.

Ultimately, having a high differential between perceived and actual velocity comes in handy mostly for pitchers who already throw hard. The “extra” mph helps that much more. Among pitchers in the top 20% in this differential, nine have an xwOBA in the top 20%. Six of them have an actual fastball velocity at least 1 mph above league average (92.5). Two others are 0.9 mph above league average, barely missing the cutoff. 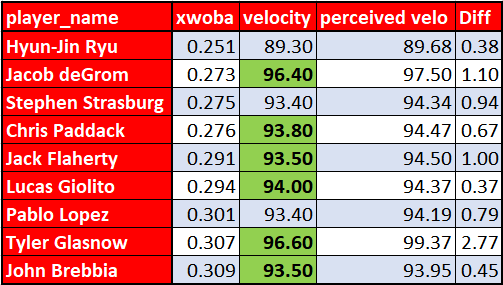 This isn’t the most scientific method, but it does show batters have more trouble making solid contact on pitches that are already fast but appear even faster.

Perceived velocity can also help explain why a pitcher who throws fast still gets hit hard. For example, German Marquez averages 95.2 mph on his fastball. However, the perceived velocity is just 93.6 mph, giving him the sixth-worst differential in baseball. His fastball has allowed a .338 xBA, putting him in the bottom 20%. Paired with an average spin rate (which is not ideal for a fastball), his whiff rate is also in the bottom 20%.

How can we tie these conclusions back to the Reds? We’ll get into this year’s pitching staff in a later post at Reds Content Plus. But we can look back on some past players to see how perceived velocity did or did not affect them over a larger sample size.

Since the launch of Statcast in 2015, John Lamb has been the Reds’ best pitcher at getting separation between actual (89.5 mph) and perceived (90.4) velocity on his fastball. However, the pitch still produced poor results (.362 xwOBA, 16.7% Whiff), in part because it wasn’t thrown particularly hard even with the deception.

Aroldis Chapman, Tony Cingrani, Anthony DeSclafani, and Sonny Gray are among the other notables in the top 10. Chapman is the obvious person to discuss. He already threw hard (100.1 mph), but the added extension from his lanky 6-foot-4 frame increased the perceived velocity to 100.7. Unsurprisingly, Chapman has a better whiff rate on his fastball than all but two pitchers (Josh Hader and Craig Kimbrel) in the Statcast era.

But hitters would probably struggle to make contact with Chapman’s fastball whether it was perceived at 100.7 or 99.7. Did any players benefit from perceived velocity on their fastballs? Cingrani jumps out more than anyone; he got a boost from 93.9 to 94.6 mph thanks to 6.83 feet of extension on average. His xBA (.209), xwOBA (.305), and whiff rate (23.8%) were well above average for a fastball.

You can play around with the leaderboard here.

[Stay tuned at RC+ for an in-depth breakdown of the Reds’ performance in this area in the 2019 season.]