Tanner Roark has quietly been someone the Reds can rely on as a middle of the rotation pitcher that can eat innings. In eight of his ten starts this season, he’s gone five innings or more. This is not out of the ordinary for Roark as he has pitched more than 180 innings in each of the past three seasons. What is out of the ordinary is that his Hard% sits at 39.2%. That’s up from 28.7% in 2018 and 27.8% in 2017. Roark is known for avoiding hard contact, so it’s interesting that it’s so high.

Roark’s BB% is also higher than in previous years. He’s walked 23 batters already this season and has issued a walk in every appearance. However, it hasn’t come back to haunt him too much yet. That’s probably because he’s been excellent at working around runners on base. Roark’s only allowed two home runs all season, even though his FB% is at 36.3%. One might wonder if that’s due to pitching away from GABP, but Roark has actually made six starts at GABP, compared to four on the road. Hopefully the wind will be blowing in at Wrigley today.

Kris Bryant will be the one to watch against Roark, as he is 7-for-14 with a double and a home run off him. 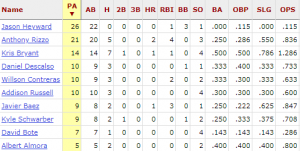 Quintana faced the Reds last week as well and gave up three runs on six hits in five innings. Joey Votto has had the most success against him, going 8-for-17 with four doubles. Eugenio Suarez and Jose Peraza each have a home run off him.

Wandy Peralta has pitched both games this series, so he’s probably not available today. Michael Lorenzen pitched two innings Saturday. The Reds had to use a good number of pitchers out of the bullpen on Friday, but aside from Peralta, no one who pitched Friday also pitched Saturday.

After using five relief pitchers Friday, the Cubs used only three relievers on Saturday, and Joe Maddon used none of them two days in a row.  Both bullpens appear to be almost at full strength going into the third game of the series.

-All signs point to Lucas Sims starting on Tuesday night at GABP.

Saw Sims getting work in the bullpen today. Threw to some batters even. Asked pitching coach Jeff Fassero. He was “not at liberty to say.” The Reds need a starter for Tuesday, remember.

-Joey Votto doesn’t care about bad takes on his offense. He’s 7-for-18 in his last four games and currently owns a four-game hitting streak. He’s also batting 9-for-22 against the Cubs in 2019.

Votto is 5-for-9 over the last two days. He’s reached base 38 straight games at Wrigley. #reds https://t.co/H0XtL2kzBx

-Reds prospect Ibandel Isabel is at it again.

-This team has fun. It may be frustrating to watch them lose games they should be winning right now, but the Reds are still fun to watch. How many times have you been able to say that the last couple of years?

Highlight of the Day

-And speaking of fun, José Iglesias makes some of the smoothest defensive plays I’ve ever seen.

Watch out Gold Glove, José is comin’ for you. ?#BornToBaseball pic.twitter.com/QOvyO1wRSU