After what was probably the best win of the season on Friday afternoon, the Reds will try to make it four straight wins against the Chicago Cubs (29-20) this afternoon. First pitch from Wrigley Field is set for 2:20 ET.

After a rough April, Tyler Mahle has rebounded well in May. In four starts this month, he has a 2.31 ERA and a 3.00 FIP, with 28 strikeouts and only four walks. The difference from April to May might be in the frequency of pitches that he’s throwing. This month, Mahle has thrown less of the four-seamer and more curve balls and split finger pitches. It’s showing in his strikeout totals too, as he’s already surpassed the 26 strikeouts he had in April and May isn’t quite over yet.

Javier Baez and Kyle Schwarber have had the most success off Mahle in limited at-bats. 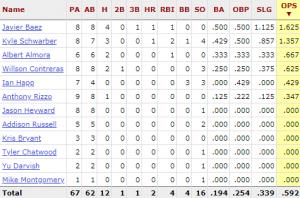 It’s not been a good season for Yu Darvish, yet in his outing against the Reds in Cincinnati last week, he was dominant, striking out 11 in 5.1 innings. He has given up a lot of runs this season, but he hasn’t lost his ability to strikeout batters.

His K% is almost 30%. In 48.0 innings, he has 62 strikeouts (though the Reds contributed to this numbers in a big way last week). He’s always been a strikeout pitcher, racking up more than 200 strikeouts in a season three different times. Darvish’s real problem in 2019 has been control, or lack thereof. He’s already walked 36 batters, and it’s only a little more than a quarter of the way through the season. He’s well on his way to breaking his career record of 89 walks set during his rookie season with the Texas Rangers.

Derek Dietrich is 3-for-6 with a home run off Darvish. The only other players who have more than four at-bats against him are Eugenio Suarez and Joey Votto, who are a combined 3-for-17 against him.

How balanced is the NL Central? The Cincinnati #Reds are in last place, 6.5 games out of 1st, but have outscored the opposition by 26 runs. The five other last place teams in baseball have been outscored by a combined 317 runs.

Tyler Stephenson had 3 hits for the Chattanooga Lookouts on Friday nighthttps://t.co/vUbLUp5a1Q pic.twitter.com/XvFM1DYsdU

-I remember this game. I think I watched until the bitter end because as a college student with no early classes, I could stay up all hours of the night and sleep in the next day.

May 25, 2011: The #Reds battle the Phillies for 19 innings over 6 hours and 11 minutes. It remains the longest game in Reds franchise history. Carlos Fisher tosses 5.2 innings in extras before surrendering the winning run in a tough-luck loss. #OTD pic.twitter.com/M1DY2eBd0X

Hey Cincinnati what do you say… the Reds got the win today?

Please enjoy these photos of Eugenio Suarez celebrating his home run yesterday. They are wonderful.