The Cincinnati Reds will visit Wrigley Field and the Chicago Cubs for the first time in 2019 on this holiday weekend. It’s also the second of five straight day games for the Reds. First pitch is at 2:20 ET.

The Cubs are coming off a split of a four game series with the Philadelphia Phillies, while the Reds try to forget about the blown five-run lead and loss to Milwaukee Wednesday. The next seven games are crucial for the Reds, as they play three games in Chicago followed by four against the Pirates at Great American Ball Park. If the Reds want to climb out of the basement of the NL Central, the opportunity is now.

In DeSclafani’s last start against the Los Angeles Dodgers at GABP, he gave up four runs on six hits, including three home runs, in four innings. His last three starts have been a struggle, as he’s given up 11 earned runs in 14 innings, though the Reds won two of those three starts.

In those 14 innings, DeSclafani has surrendered five home runs. This might be due to his FB% being at 48.0%, the highest of his career thus far. While his FB% is high, his GB% is at 32.5%. Normally it’s between 40% and 45%. He’s giving up a lot of fly balls, but not a lot of ground balls. He’s never been an exceptional ground ball pitcher, but this season his ground ball rate has been particularly low.

Javier Baez and Willson Contreras both hit DeSclafani well. While Anthony Rizzo is 4-for-24 against him, three of those four hits have been home runs. 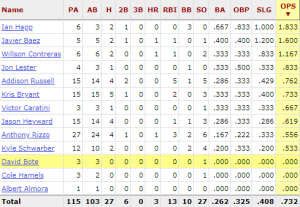 Kyle Hendricks has been one of the Cubs best pitchers this season, behind Jon Lester (who the Reds will not face this series), boasting a 3.21 ERA and a 3.28 FIP in 56.0 innings. With only 45 strikeouts this season, he’s not a huge strikeout pitcher. He pitches to contact and is more of a ground ball pitcher. His career GB% is 48.6%, and this season it’s at 43.4%.

Hendricks has four pitches, but relies mostly on two of them–the sinker and the change-up. He’ll throw a four-seamer about 12 percent of the time, but rarely throws a curve ball (6.6%).

Last Tuesday in Cincinnati, he pitched 8.0 innings against the Reds, giving up one run on three hits while striking out seven. The lone run came via a Joey Votto home run. Votto is the only Red to have any measure of success against Hendricks, as he is 9-for-21 with a double, three home runs, and 11 walks. Eugenio Suarez has two doubles off him, and Jesse Winker is 3-for-11 against him.

The Reds had two days off this week, and yet because David Bell had to go to the bullpen early on Wednesday, it might not be as well-rested as he would like it to be. Robert Stephenson and Michael Lorenzen both pitched more than one inning, but Stephenson was the only one to pitch two full innings. If anyone is not available this afternoon, it’s most likely to be him.

The Cubs used five relief pitchers in a loss to the Phillies yesterday. Joe Maddon had to use at least three relievers in each of the four games of that series.

Yasiel Puig is back in the lineup this afternoon.

-A couple of Reds minor leaguers have had a good week at the plate.

-If you haven’t listened to the Jim Day podcast yet, you should go listen. It’s fantastic. You get to learn about the players in a way you don’t get during a regular media session. The latest episode is with Joe Morgan, but if you want more fun, I highly recommend also listening to the episode with Sean Casey. Stories and laughter for over an hour!

Hall of Famer Joe Morgan is the latest guest on a very special edition of the Jim Day Podcast. You do not want to miss this. ?? https://t.co/pdncyWWJKZ pic.twitter.com/h5rDNoMTtf

-While we’re on the subject of podcasts, the latest Redleg Nation podcast is available as well.

Redleg Nation Radio #268: Are You Not Entertained (By the #Reds Team)?

There has been angst about the Reds record on the inter webs, and it seems to me like some members of this fan base need a reality check. I have news for those fans. The Reds were not predicted to win the NL Central. Five games under .500 going into Memorial Day weekend is not terrible for a team that was 18-33 a year ago at this time.

Personally, I predicted a .500 finish before the season started, and I stand by that prediction as of now. I’ve already said it on Twitter once this season, and I’m still saying the Reds will not finish in last place in 2019. You have full permission to resurrect this paragraph from the archives if this is not the case.  But one thing I do know is that this Reds team is already more fun than the last couple of years (Hi, Derek Dietrich!), and I have optimism that the Reds record will get better as the season progresses.