This past Saturday vs the Dodgers, Tyler Mahle completely controlled the game against a bevy of left-handed hitters that Dave Roberts assembled, holding them scoreless in six innings of work. The Reds offense finally decided to score some runs during one of Tyler’s starts, and the good guys won 4-0 to stay within striking distance of their division foes. Nothing else to see here, right?

Not so fast. If you happened to check Mahle’s FanGraphs page prior to the game, you might have noticed that he does not perform very well against leftys. A similar check of the Dodgers lineup would show that they can feast on right handers. In other words, a 4-0 Reds win was not exactly the most likely outcome, despite Mahle’s strong start to the year.

Prior to the game, after checking starting lineups, I had a thought cross my mind that I wanted to investigate further. Would the Reds have benefited from using an opener?

What is an opener?

If you are unfamiliar with openers, it is a strategy that started in Tampa Bay almost exactly one year ago and has since spread to other teams throughout the league. To better understand the strategy and data behind it, Mike Petriello recently posted a very timely article about it.

There are several different philosophies behind the opener. When the Rays first used it against the Angels, one benefit was to neutralize the platoon advantage, given the Angels top three hitters were all right handed. Another reason for doing this was to put Sergio Romo, an average reliever who performed better vs RHH, in a better situation to succeed. Rather than use him in a potentially high leverage situation late in the game, giving him a low leverage situation where he has a platoon advantage can maximize his value.

The final benefit is allowing the true starter (or headliner) to potentially avoid having to face the top of the order 3 times. If Romo got the first three batters out (he did), then the headliner would have 24 at-bats before facing the leadoff hitter for a third time, rather than the standard 18. Pitcher’s stats are markedly worse when they face hitters for a third time, something Reds fans have seen David Bell act on with quick pitching changes.

Candidates from the Reds bullpen

One look at Tyler Mahle’s splits (5.49 FIP vs LHH, 3.31 xFIP vs RHH), and you can see why a Cincinnati shutout was not the most probable outcome. So who could the Reds have used as an opener to give Mahle some help? Given the Dodgers best hitters are almost all leftys, a left handed reliever would make the most sense. Below are the Reds left-handed relievers and their career numbers vs LHH.

My first thought was Amir Garrett, given how well he has pitched this year and David Bell’s preference towards his facing LHH. However, given Garrett’s overall effectiveness (2.67 xFIP) and importance to the bullpen, it would not make sense to use him in low-leverage situations early on. Remember, the idea is to maximize a lower performing reliever by putting them in a better position. With Peralta not offering much platoon advantage, the remaining options are Zach Duke and Cody Reed.

I am asking for some creative freedom here considering Cody Reed pitched two innings the night before and was then optioned to Louisville, making it impossible for him to pitch on Saturday. But given how many of you watched the Game of Thrones finale on Sunday, I am hoping you can use your imagination for this exercise as well.

While Zach Duke’s career numbers are not bad, he has not been good this year (4.68 xFIP vs LHH, 5.75 xFIP overall). Maybe an opener role vs three lefty hitters would be the best way to use Duke, but the argument can also be made that he should not even be on the team. Assuming Cody Reed fits more in the Reds long-term plans, and based on his success in limited appearances this year, Reed seems like a better candidate for an opener role.

Looking at the Dodgers lineup, we get a better sense for why Dave Roberts loaded the top 6 spots with leftys against Mahle. Here are their career numbers vs RHP (note: Matt Beaty batted 6th but just recently debuted in MLB and does not have enough stats):

When facing a southpaw, the offensive numbers dip down a bit.

Max Muncy and Alex Verdugo actually improve against LHP, while Joc Pederson show the biggest decline. Bellinger and Seager are still well above average, but not quite as dominant. It would still not be a guarantee by any means, considering how good the Dodgers offense is, but it would provide a better matchup.

These changes do not take place in a vacuum, however, as the Dodgers would have the ability to counter and adjust their lineup accordingly. Take a recent game vs a good left-handed starter as an example for how different and balanced their lineup can look. 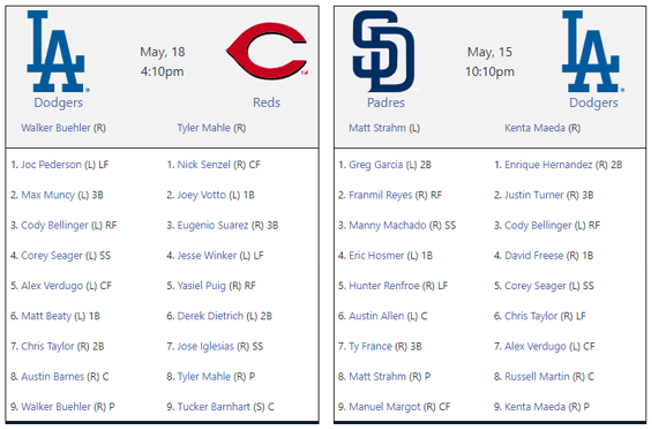 If Cody Reed opened the game, he likely wouldn’t have even faced Joc Pederson (by far the Dodgers worst hitter against LHP) who can be replaced thanks to roster versatility. Kike Hernandez, Justin Turner and David Freese also could have gotten plugged in,

Maybe Saturday would not have been a good time to test the opener considering the Dodgers can beat teams in so many ways, as well as the Reds lack of a realistic candidate. Plus, Tyler Mahle won the game anyway, so even if an opener had been successful, it would not have provided an incremental win. That’s just baseball.

As the David Bell era continues in Cincinnati, however long that may be, do not be surprised if the opener makes an appearance. In Mike Petriello’s article that I referenced above, he does not find any conclusive data to support this strategy, but it is still very early and the sample sizes very small. While it is not the sole reason for the Rays recent success, they did win 90 games with almost no star power and in a division with the Yankees and Red Sox. There are clearly very smart people working in that organization and as long as they are pursuing this strategy, it warrants some attention.