The Reds scored three runs in the first inning, but like it has been for most of the season, that was all the Reds could put on the board tonight. The good news is that was more that enough for Sonny Gray and the Reds bullpen. Gray pitched six shutout innings, striking out a season high nine batters. The Reds bullpen did their job like they have done all season and held on to a 3-0 victory.

The Reds have now participated in four consecutive shutouts (two in their favor). It was the Reds seventh shutout of 2019, and it was the first time the Brewers have been shutout this season. The Reds are now just 4.0 games back from a playoff spot, and that could be cut down to 3.5 games with Giants win late tonight against the Braves. 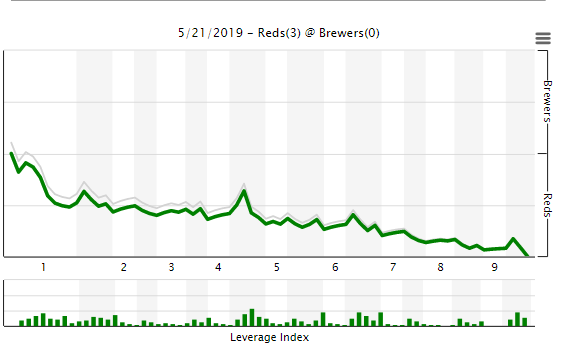 According to Fangraphs WPA statistic (winning percentage added), the most important play of the game was Curt Casali throwing out Ryan Bruan at third base for the first out in the 4th inning; Grandal advanced to second base, 1 out. That play increased the Reds chances of winning by 10.6% (from 50.0% to 59.0%).

Sonny Gray had arguably his best stuff of the season tonight as he struck out a season high 9 batters: 6.0 IP, 5 H, 0 R, 4 BB, 9 K. Gray did walk 4 batters, which is less than ideal. However, the few times the Brewers were able to put the ball in play, there was limited hard contact (only 2 balls hit with xBA of > .300). Gray is putting together a pretty nice first season in Cincinnati as he now has a 3.78 ERA and 3.11 FIP.

Phillip Ervin had an RBI double in the first inning. It had an exit velocity of 111.6 MPH, which was the hardest hit ball by a Red this season (the two previous best were both by Puig at 111.5 and 111.0).

Nick Senzel lead off the game with a triple. He also drew an impressive walk in the 5th inning, taking some very close pitches. He had two pitches hit tonight with EV of 101+.

Joey Votto extended his on-base streak to 11 consecutive games with an excuse me swing in the 8th inning, beating the shift on a 49.6 MPH ground ball. I am sure Votto will take it right now.

Amir Garrett did walk a guy, but he pitched a scoreless inning. He now has a 1.33 ERA/2.15 FIP on the season with 13.72 K/9. You have to start wondering if Garrett might end up finding his way to Cleveland in early July for the mid-summer classic?

Raisel Iglesias did give up a leadoff single and then a 97.7 MPH lineout with xBA of .360. He however then got a strikeout and a game ending GIDP. Iglesias has now has seven consecutive appearances without allowing a run.

Nick Senzel was picked off in the 5th inning. It was his first caught stealing of his career. He was 6 for 6 prior.

I watched the Brewers broadcast tonight because I am a big fan of Brian Anderson (minus him calling the 2010 & 2012 NLDS as well as a couple brutal NCAA Tournament losses for Xavier). Both Anderson and his partner talked about Joey Votto in the first inning and came to the conclusion that he will get hot at some point soon and end up with a great year because of his track record. It is pretty amazing that a couple of guys that only see Votto a handful of times a year are smart enough to realize that it is silly to think Votto won’t get going because of his track record, yet the local broadcasters and talk show hosts can’t write Votto’s eulogy fast enough.

Glad we could give them a reason to keep him on the roster!