The Reds were hoping to finish off a winning week against the two best teams in the National League, but they had to settle for a 3-3 homestand. The Reds batters could not figure out Hyun-Jin Ryu, as he lowered his ERA to 1.52 after seven shutout innings against the Reds. Tanner Roark gave the Reds five solid innings, but the Reds bullpen had a rare poor performance, allowing six earned runs over four innings. 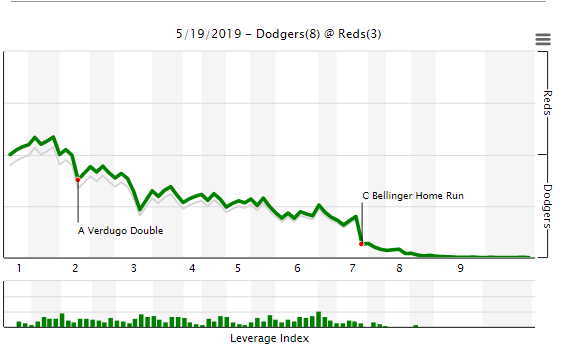 According to Fangraphs WPA statistic (winning percentage added), the most important play of the game was Wandy Peralta allowing a 2-run home run to Cody Bellinger with 2 outs in the 7th inning, giving the Dodgers a 4-0 lead. That play decreased the Reds chances of winning by 13.3% (from 19.9% to 6.6%).

Jose Peraza hit his 4th home run of the season. It was GABP special, as it only had a .270 xBA.

Nick Senzel had two base hits. Both hits were beating the shift.

Phillip Ervin had a pinch-hit single against Ryu in his first PA since being recalled. Ervin entered play with a .785 career OPS vs LHP. He should play everyday he is up against LHP.

Yasiel Puig made one of the best catches that you’ll ever see a RF make.  He unfortunately had to leave the game in the 8th. Hopefully it was just precautionary.

? @YasielPuig makes an incredible catch to end the inning with bases loaded! ?

Jose Peraza had a costly error in the third inning. Peraza had a rocket hit right at him that should have been an inning ending double play. The ball ate Peraza up and ending up allowing a run to score. The Reds chances of winning dropped from 32.1% to 23.2% as the result of the play.

Zach Duke came into face 3 LHB and walked 2 of them. Duke had been pitching better entering this series (he has 6 consecutive scoreless appearances), but he now has a 6.63 FIP on the season.

Wandy Peralta gave up a 2-run bomb to Cody Bellinger. He threw a fastball right down the middle of the plate to the NL MVP front-runner.

Robert Stephenson was back to his old ways as he walked 3 batters in an inning. He did strike out 3 batters, but not before he allowed 3 ER.

Joey Votto got called out for a foul tip in his first plate appearance of the game. The ball clearly did not hit Votto’s bat and he was very upset. Votto argued for quite a while with home plate umpire Dan Bellino. He showed good restraint by not ejecting Votto, but that was probably because he realized what an egregious call he made. It has certainly felt like early this year that Votto has had a lot of calls behind home plate go against him. It is probably more magnified by his early season slump, but it is not helping.

Yasiel Puig had two balls hit with an exit velocity of 100+ MPH that resulted in 3 outs. The lineout had an expected batting average (xBA) of .460 and the double play had xBA of .280.

You can’t be too upset about a 3-3 homestand against the two best teams in the NL. The Reds however are getting to the point of the season where moral victories won’t mean much after the hole they’ve dug themselves. There is still a lot of season left and the Reds have certainly looked better of late (they are 20-18 after the 1-8 start). They do need to get a run going soon if they want this season to mean anything.