As I noted two weeks ago when discussing Anthony DeSclafani’s changes this season, he’s throwing his fastball high in the zone more than ever. Turns out he’s not the only one. The Reds as a team are following that mantra, led by pitching coach Derek Johnson.

From the Enquirer’s Bobby Nightengale, here’s Johnson recently explaining his philosophy: “It’s pitcher by pitcher,” Johnson said. “But I think if you look at where guys are swinging – just kind of overall down in the zone kind of stuff – it makes sense to do that.”

The numbers bear out just how much the Reds are throwing four-seam fastballs high in the zone. First, here’s a look at Statcast’s “attack zones” for reference: 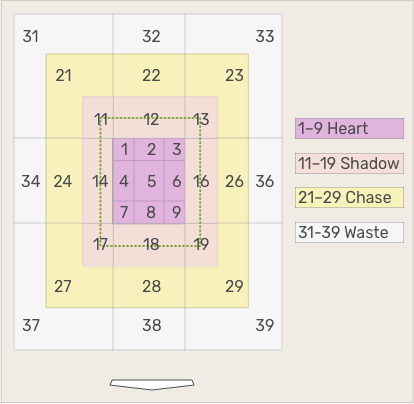 The Reds have brought in pitchers like Tanner Roark who already liked to throw high in the zone. But several who were in Cincinnati before 2019 are now shifting their approach with the four-seam fastball. 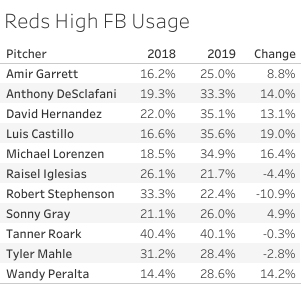 Those are some huge jumps. Luis Castillo has more than doubled his usage of high fastballs. Wandy Peralta, Michael Lorenzen, and DeSclafani have seen jumps of nearly 50% as well.

Why are teams, including the Reds, shifting to this approach? For a long time, pitching has been about keeping the ball down. That has started to change in recent years.

Going back to Johnson’s quote, it has to do with hitters’ approaches at the plate. Around the league, we’ve seen an increased focus on launch angle and getting the ball in the air. Hitters are changing their swing planes and swinging “up” on the ball rather than rolling their top hands over. To do so, they’re dropping the barrel of the bat, which makes the low pitch easier to drive than the high one.

As a counter to this change in approach by hitters, pitchers are throwing more four-seam fastballs up in the zone more (along with more breaking balls and fewer sinkers). 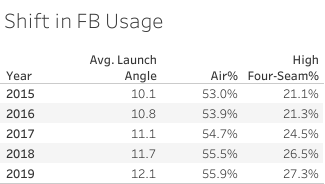 That’s all well and good, but is it effective? The answer is probably obvious since so many teams are doing it. Let’s look at the numbers since 2017 when the huge jump in high fastballs started.

The data is excluded to pitches batters are most likely to swing at, which eliminates the “Waste” zones where hitters are unlikely to offer. We can see that up in the zone is the place to live with the four-seamer. While the top of the zone is becoming a safer place to throw the fastball, the bottom is doing the opposite over the past four seasons.

Up in the zone, batters make weaker contact because they’re more likely to get under the ball and pop it up. They also whiff far more often because a.) a four-seam fastball is hard to catch up to when thrown high in the zone and b.) it has higher the spin rate.

To elaborate on the second point: Four-seamers have more backspin than any other pitch. That means the ball drops less before it hits the plate; however, hitters still expect the ball to drop and swing under it.

Pitchers who both throw hard and have high spin rates with their four-seamers tend to get the most swings and misses. Since 2015, pitches thrown at least 95 mph at 2,400 rpm had a 14.0% swinging-strike rate. Keeping the velocity the same and dropping the spin rate to 2,200 (roughly league average), the SwStr% falls to 12.6%. A fastball at average velocity (roughly 93 mph) and average spin falls to 9.0%.

That said, a pitcher doesn’t always need both velocity and a high spin rate to miss bats. Having the latter can help a pitcher overcome the deficiencies in the former. The inclusion of Rich Hill and Rick Porcello on this SwStr% leaderboard since 2015 demonstrates that: 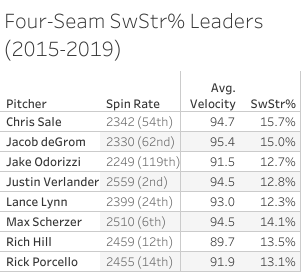 Let’s shift this back to Reds pitchers. Among the pitchers who have increased their usage of high four-seam fastballs, there have been notable improvements.

One huge caveat: Amir Garrett, David Hernandez, Lorenzen, and Peralta each have fewer than 20 fastballs put into play. The batted ball numbers can change pretty quickly. So take these numbers with a grain of salt.

The shift in fastball usage has led to weaker contact for four pitchers on the list: Castillo, Hernandez, Gray, and Peralta. Of the seven Cincinnati pitchers who are throwing more high fastballs this year, five are getting a higher percentage of whiffs. DeSclafani has more than doubled his SwStr%. Peralta has tripled his. Sonny Gray and David Hernandez can give credit for the jump to above-average spin rates as well.

Lorenzen’s case, while potentially skewed by the sample size, is odd and worth noting. His four-seamer has undergone a velocity uptick from 95.5 mph last season to 96.2 this year, putting him in the 90th percentile in the league. The pitch’s average spin rate ranks in the 74th percentile. With a huge jump in fastballs thrown up in the zone, it’s a bit surprising he doesn’t have more whiffs on the pitch. It’d be interesting to see what would happen if Lorenzen dropped his sinker usage (currently 22.6%) and focused more on his four-seamer (14.5%).

While it’s still relatively early in the season, the high fastball is paying dividends for several Reds pitchers. As more data becomes available, we’ll get a better idea of whether these changes are lasting. But between this and pitchers throwing to their strengths, Derek Johnson’s impact on the team has been noticeable.

Check out more of Matt’s analysis at Reds Content Plus and consider becoming a patron.