Yesterday’s game started with me mistakenly attributing a 15 ERA to Tanner Roark. As it happens, I was merely futurecasting. His ERA probably is an actual 15 right now.

Josh The Pilot is fond of stating that happiness in life is based on realistic expectations. Last night I expected to take a nap during the game because the previous day took approximately five days and I was exhausted to the point of sick. I woke up at some point in the ninth feeling a bit better. So I thought the game was pretty great.

Let’s get Sonny the win today, guys. He needs a new phone. 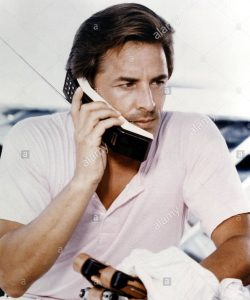 (If you think I can’t keep this up all season, let me just tell you how many pictures of Don Johnson wearing pastel the Internet contains.)

The Internet does not have any pictures of Yu Darvish wearing pastel.

Jesse Winker wore these shoes last night and everybody was freaking out over them. I think they look like eBay threw up all over his feet but he’s repping some decent Reds history with Certain Reds mentioned and Certain Other Reds not, and I appreciate that, so I’ll allow it.

Jesse Winker’s cleats are on another level tonight. ?? pic.twitter.com/9MNNyCcFFU

Meanwhile, Dietrich is wearing this tonight, which I’m sure the umpires will just love:

Game of Thrones night at GABP with Derek Dietrich wearing a GoT belt that was sent to him.#got #Reds pic.twitter.com/9uLi6I8cz3