Joey Votto and Yasiel Puig have both been off to slow starts to 2019. Their slow starts have been a major reason why the Reds are in last place despite having the best pitching staff in the National League to date. Votto and Puig both got the Reds off to a big start in the first inning. Votto smoked a rocket for an RBI triple. Votto was temporarily stranded on first base after Suarez and Winker struck out, but Yasiel Puig picked those guys up with a big blast to give the Reds a 3-0 early lead.

Anthony DeSclafani could not hold the early lead and struggled through four innings. The National League’s best bullpen picked up Disco. David Herandez lead the way with two perfect innings with five strikeouts. Eugenio Suarez hit a game tying home run in the fifth inning, and Derek Dietrich had a bloop RBI single in the seventh inning to give the Reds the lead for good.

The Reds are now just 4.0 games out of a wild card spot with tonight’s win. 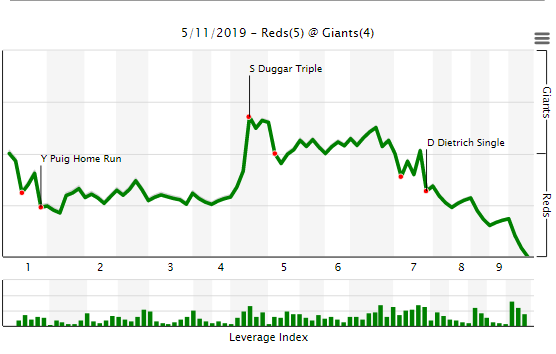 According to Fangraphs WPA statistic (winning percentage added), the most important play of the game was Derek Dietrich’s RBI single with 2 outs in the 7th inning, giving the Reds a 5-4 lead. That play increased the Reds chances of winning by 19.5% (from 48.7% to 68.2%).

Joey Votto said that he is hitting the ball harder of late (something that the Reds radio broadcaster disagreed with but the numbers back up). Votto clearly proved that tonight when he ripped a ball with a 105.2 MPH EV for a RBI triple. Votto also had three flyouts, but all three of those were hit with an above average exit velocity.

Yasiel Puig went 2 for 4 with a home run. He also stole his team leading 7th base of the season. Puig’s first inning home run had an EV of 106.1 MPH, and his third inning single had an EV of 111.1 MPH (his hardest hit ball of the season).

Eugenio Suarez had two extra base hits on the evening, including his 12th home run of the year (108.5 EV).

Nick Senzel and Derek Dietrich both reached base twice.

Anthony DeSclafani did not have a good night: 4.0 IP, 8 H, 4 ER, 1 HR, 0 BB, 2 K. He gave up a lot of hard contact on the night (average exit velocity was 93.1 MPH). Credit to David Bell for recognizing that he didn’t have it and giving it over to the bullpen tonight.

Nick Senzel had his first big league error. He dropped a routine flyball hit right at him. It luckily only cost Robert Stephenson a few extra pitches and nothing more.

Tucker Barnhart was 0 for 3 with 2 strikeouts. He is now hitting just .172/.294/.290 on the season. Curt Casali is pretty clearly deserving of more playing time at this point. Casali has a 94 wRC+ on the season, coming off a 114 wRC+ with the Reds last season.

Yasiel Puig missed an opportunity after his first inning bomb. The Giants fans really give it to Puig every time he steps to the plate, catches a fly ball, breathes, etc. Puig absolutely should have had the slowest trot in big league history after his home run, but Puig had a normal trot. Disappointing.

There was a scary moment in the 6th inning. Nick Senzel and Jesse Winker collided going after a bloop single. Both players were down for a while, but both guys were OK and stayed in the game.

The Reds are now +70 runs better than the Pittsburgh Pirates this season.