Luis Castillo did not have his best command on Friday night, but he gave the Reds another dominating outing as he held the Giants scoreless for six innings. The Reds bats continued their recent surge of late, minus the no-hitter on Tuesday. Nick Senzel and Yasiel Puig lead the Reds with two hits and two runs batted in each. Road wins have been difficult for the Reds this season, but they have now won back-to-back road games and improved to 8-14 on the road. 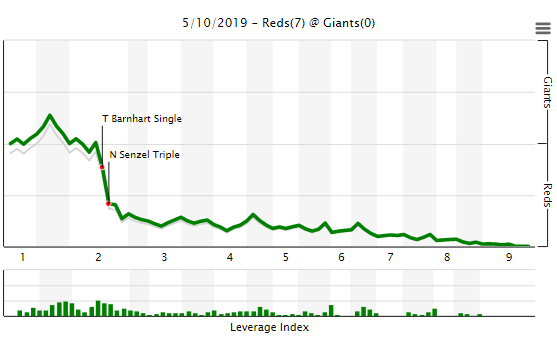 According to Fangraphs WPA statistic (winning percentage added), the most important play of the game was Nick Senzel’s 2-RBI triple with 2 outs in the 2nd inning, giving the Reds a 3-0 lead That play increased the Reds chances of winning by 17.7% (from 61.4% to 79.1%).

Luis Castillo didn’t have his best command (he walked 5 batters), but his stuff was still electric as he struck out 11 batters over six scoreless innings. The Giants only had two balls hit off Castillo that had an expected batting average of greater than .110. He lowered his season ERA and FIP to 1.76/2.78.

Nick Senzel had two hits, including a 2-RBI triple. Senzel on the night had three balls hit with an exit velocity of > 101 MPH.

Tucker Barnhart reached base twice, including driving the first run of the game with a slick single down the left field line.

The Reds picked up a game on both the Cubs and Cardinals today!