It’s work time as I type this. After I complete this column, I must see to three client articles, two blog posts for my own site, a work proposal, and all seven books in my head currently begging to be born. But at my right hand, standing watch on the windowsill, is an old-school transistor radio turned low—the only way to hear the broadcast without the forest of electronic interference that is my desk—while the TV broadcast flows into an empty living room, there to show me the plays I don’t see live whenever I hear Marty or Cowboy’s voices rise on the radio.

Occasionally I depart my desk to check on the cause of the radio excitement. Occasionally I am distracted from my work for a false alarm over a foul ball. Never is my full attention on my work; always is it sacrificed to the progress of a children’s game.

This doesn’t happen, normally; the last time I followed a season this closely is the summer my father was dying, and the game was the family’s only way out for a while. California games were a problem for the day; day games were a problem for the night; off days were a nightmare. In 2019 my daily schedule and rhythms aren’t so fearfully hinged, but when the game is underway, the game is on.

It wasn’t long before I shook out why:  I have become emotionally attached to this team. I did not seek it, nor did I squash it. By this I don’t mean I’ve become attached to the Reds as an organization; that’s a given—it’s bred into each turn of each helix of each DNA strand. I mean that this particular group of players at this particular time seem to need hugs, and I’m concerned about these individuals having a good game and being proficient and inspired in their profession.

I have struggled over the past few seasons over the concept of Seinfeldian laundry— that we’re cheering for uniforms, not people, and the same person we hold in esteem one moment becomes booed the next simply because of the clothes he wears. Witness the pregame trade of catcher Devin Mesoraco to the Mets a year ago this week: The man was still wearing his Reds socks and by the end of the game, the crowd demanded his retirement to the dugout because he was the pizza strikeout. It bothered me. It still does.

This is why, I think, we are eternal witnesses to the fallback of Reds Fans of a Certain Age on the Big Red Machine. They weren’t just a group of players thrown on a roster by a computer. They were a core group who stayed together. For years. They were Our Guys. We grasp at the Machine era because free agency means that it will never, ever happen again.

But all this ebb and flow of clothing also means that if one concoction of human beings doesn’t get the job one year, another might take its place. The reality of this was recently well expressed by Sam Miller: “The only thing that makes a sport in which players move around a lot possible is our disloyalty. Once a player leaves, we’re finished with him. But only because we have to make room in our hearts to love, almost unconditionally, the one who replaces him — and because we know he’ll be well taken care of by his new city.”

We see this phenomenon unfolding as I type. This team makes it easy for us to care for, and take care of, each member of its tumbling, up-and-down, in-and-out roster. One of our relief pitchers is also an outfielder; another one sprints the long distance to the mound; yet another races the veteran first baseman to the dugout after retiring the side. Jesse Winker chose to mark an opposing batter’s choice of  “Baby Shark” as walkup music to climb up on a dugout bench and chomp his arms together. His absolute delight in waving a cheery farewell to Mets fans in Metsville marks him as perhaps the bravest outfielder in the game.

Derek Dietrich has earned his pregame antics by smashing homer after homer once the National Anthem is done. In the team shop last week, my husband tried to hunt down a Dietrich shirt… Dietrich, whose image still pops up on a Google search in a Marlins uniform, signed on a minor league contract all of three months ago. I have meat in the freezer older than that. During the jersey hunt, we wondered aloud why Kemp jerseys still hung on the rack, a whole 24 hours after he was released. We were finished with one, tipping open our hearts to the other.

And Yasiel Puig might not be posting the offensive numbers Reds fans were hoping for, but, as a wise man with a winsome desire to connect with the faithful, he has learned the lesson of the Sean Casey lifestyle. He visited his new home city just after the trade was done and palled all over town. He then sealed the deal on the field not with his bat, but his fists: His immediately legendary one-man charge against the entirety of the Pittsburgh Pirates, after breaking out of a calming embrace by Votto which suggested genuine friendship on the part of both players, has affixed his jersey to any number of local backs. 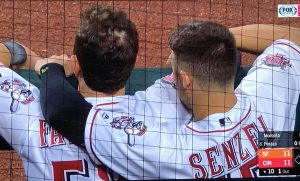 In fact, the fanbase is ready to pour affection on more new heads. Senzel? Bring him up. During his debut, the TV cameras captured him in the dugout with an arm slung around Kyle Farmer. I saw this and felt distinct relief that someone was letting the new boy sit next to him.

VanMeter? We’ll take him too. If you have any depressed horses left over from the Kentucky Derby, ship ’em over the bridge.

And I haven’t even mentioned Suarez, he of the two-toned ballet footing.

They’re inconsistent. They’re streaky. They pile on eight runs in the first couple of innings and never score again. The pitching shines, and the offense develops run constipation for over a week. The pitching collapses and the offense decides that best practices for sliding into bases involves beginning to skim the foot halfway down the path. The celebratory handshakes are so complicated and extensive that I’m always screaming at them not to hurt themselves by slamming into each other midair or suspending the rookie over their heads Dirty Dancing style.

One of this young season’s most enchanting home run celebrations involves Votto and Winker falling backwards into one another’s arms. For that to work, a few moments suspended in the open air is involved. Daring’s involved. Trust is involved. The heart must be exposed to the open sky. You cannot hang on. You must let go. You must make the conscious decision to fling yourself back on your own heels.

Why have I taken pains to witness all this from these well-paid professionals, for all their myriads of faults and pillow fort in the division basement?

700 WLW’s Lance McAlister got it in ten words, a meteor of philosophy streaking across a sportstalker’s unending social media promo chores:

“Last year I felt hopelessness. This year I feel frustration.”

Here. We. Go. Sports Talk is next.
Let's talk #Reds
I was asked the difference between last year and this year if the #Reds are still in last? Answer:
Last year I felt hopelessness
This year I feel frustrationhttps://t.co/dNBZrsyCrN pic.twitter.com/RRbycgIRB3

One is resignation. The other implies ambition.

We can forgive ambition.