A reliever’s struggles are often amplified by two factors. The first is the limited number of innings they pitch; one rough outing can take a promising season stat line and smash it to smithereens. The second is the situations in which they appear in games. A home run allowed in the bottom of the ninth will stick in the memory far longer than one in the fourth. For a pitcher like Raisel Iglesias, the frustration can mount even more because of his immense talent. The Reds have seen him dominate before. Where did that pitcher go?

Relievers are well-known for their volatility from year to year. The best relievers — usually deemed closers by their respective teams — tend to hold up better than their bullpen-mates. But even they’re not immune to off years.

Iglesias is the latest bullpen “ace” getting knocked around.

Iglesias owned a career 2.97 ERA, 3.46 FIP, and 3.48 xFIP coming into the 2019 season. As a reliever exclusively, he held a 2.42 ERA, 3.37 FIP, and 3.57 xFIP. That was enough to earn a three-year, $24.1 million contract in the most recent offseason, buying out his remaining arbitration years after he chose to void his originally signed deal. It represented a raise for one of the game’s best relievers and gave the Reds some stability in their bullpen.

Batters are squaring him up more than ever; his average exit velocity allowed is 91.7 mph, putting him in the bottom 6% in MLB. It’s a jump of nearly 6 mph from last season, which was right at his career average coming into the year. He’s allowed four home runs, a problem that has carried over from last season and worsened.

While losses aren’t an ideal way to evaluate a pitcher — especially a reliever — they stick out when continually occurring in late-game scenarios. Iglesias already has five this season. He has come into four games where the Reds were either tied or leading when he entered and losing when he left. He has another appearance where he entered with a lead and left with the game tied. The frustration is boiling over, with Iglesias blaming his struggles on his usage in tie games.

As the debate goes on about whether he should continue to see high-leverage situations, the primary question remains: what’s wrong with the Reds’ prized reliever?

Where is Raisel Iglesias struggling?

Whether a TV viewer or a ticketholder, baseball fans see a bright, shiny number with mph after it on each pitch. When the number they see doesn’t quite look right, it jumps out. Fans get concerned when they see Chris Sale suddenly throwing 92 instead of 95, they get concerned. Jansen’s velocity was a storyline throughout the Dodgers’ 2018 season. Even to the most casual of baseball fans, it’s the most obvious sign something is wrong.

Naturally, it’s where we’ll start with Iglesias. The chart isn’t heading in the right direction: 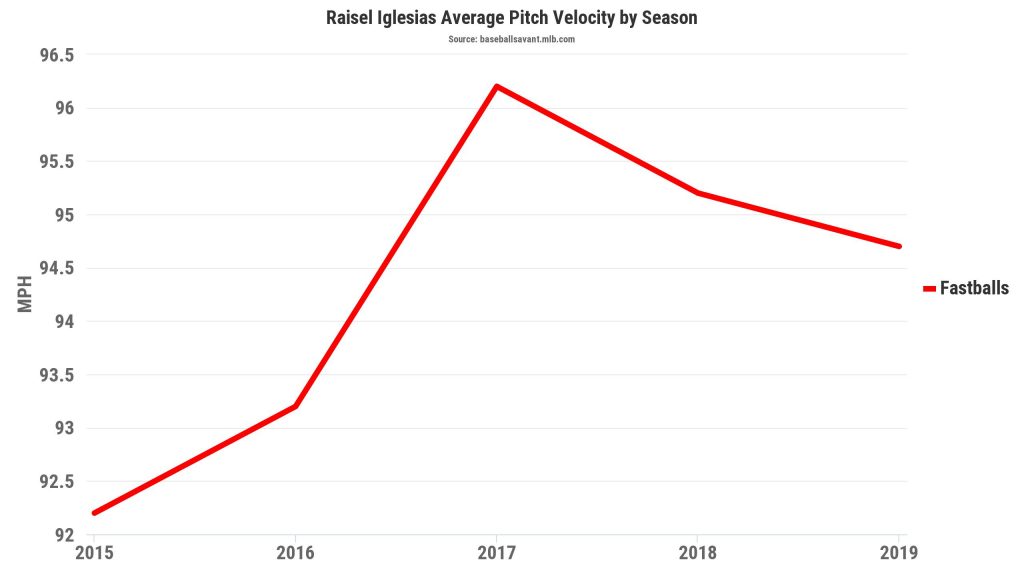 Both of Iglesias’ fastballs — a sinker and four-seamer — are suffering from diminished velocity over the last two seasons. While the sinker has stayed steady at 95.0 mph this year, the four-seamer is down to a 94.1 mph average, dropping almost a full mph. Both pitches are way down from 2017 — the four-seamer by nearly 2 mph and the sinker by 1 mph.

Encouragingly, Iglesias has pitched in games where his velocity looked like normal. He has averaged as high as 96.1 on the four-seamer and 97.7 on the sinker in games this season. But he’s also dipped down to 92.0 and 92.5, respectively, on those pitches, with games in the 94 range more often than not. That can certainly make a pitcher more hittable, especially when leaving balls right down broadway.

Despite the four-seamer taking a bigger velocity dip, it hasn’t suffered much this year.

Now, let’s look at the sinker.

Batters are teeing off on the pitch to the tune of a .556 average (.459 xBA), 1.111 slugging percentage (.837 xSLG), and .698 weighted on-base average (.546). The average exit velocity on the pitch is an astonishing 99.0 mph. Only two pitchers in baseball have allowed harder contact on their sinkers this year. This isn’t a new development, though the metrics are particularly staggering early on. The sinker was the primary source of Iglesias’ home run problem in 2018. Seven of the 12 long balls he allowed came on the pitch.

The heat maps on the pitches provide further insight on why one hasn’t been as bad as it seems and the other has been an utter disaster. The four-seamer is on the left, with the sinker on the right: 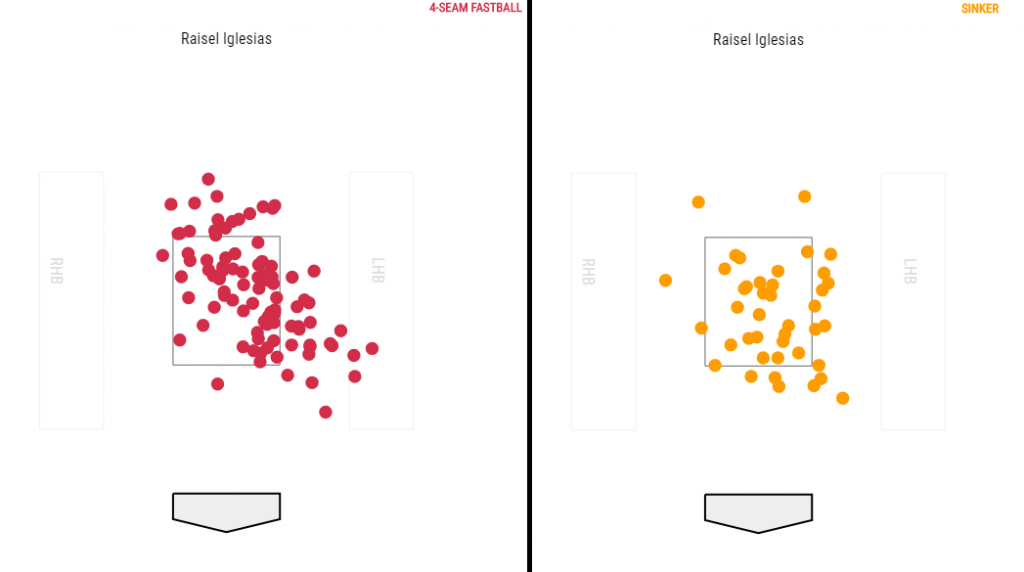 Generally, Iglesias is keeping the four-seamer either up high where hitters still have trouble catching up to it despite diminished velocity or on the corners. Clearly, there have been a few balls left over the plate, but there’s a more defined strategy at play when compared to the sinker.

He’s similarly hit the edge of the strike zone with his sinker (51.2%). The plan of attack is not as clear, however. Against right-handers, he’s primarily trying to pound the inside part of the plate. But he has also left a few pitches in the heart of the plate because they tailed too far as he attempted to hit the outside corner. Against lefties, he’s also trying to paint the inside corner, but the ball has tailed over the plate too often.

Beyond that, a sinker is simply a more hittable pitch than a four-seam fastball. Firstly, four-seamers have higher spin rates. Due to backspin, a four-seamer thrown up in the zone appears to rise. It doesn’t actually rise due to gravity, but hitters expect the ball to drop more and it never does. The result: swings and misses under the ball or — especially in today’s era of launch angle — pop-ups. The further above average the spin rate, the better; Iglesias’ is in the 71st percentile. His four-seamer is above average in swinging-strike rate (11.8% vs. 10.1%) and his pop-up rate on the pitch is as well (15.4% vs. 9.4%).

That explains the solid metrics of the four-seamer. What’s the deal with the sinker?

The sinker, by design, doesn’t get many whiffs. The goal is to get grounders. The pitch has fallen out of favor around the league as hitters focus on launch angle. It’s easier to get the barrel of the bat on an upward plane on balls in the middle of the zone or lower. Thus, they’ve feasted on sinkers. Some pitchers still use the pitch effectively. The two-seamer that starts outside and tails over the corner of the plate will always be a weapon, but not every pitcher can command it that well. Many are decreasing their usage of the pitch significantly, Iglesias included.

On the left is his xwOBA on the pitch by season; on the right is his usage: 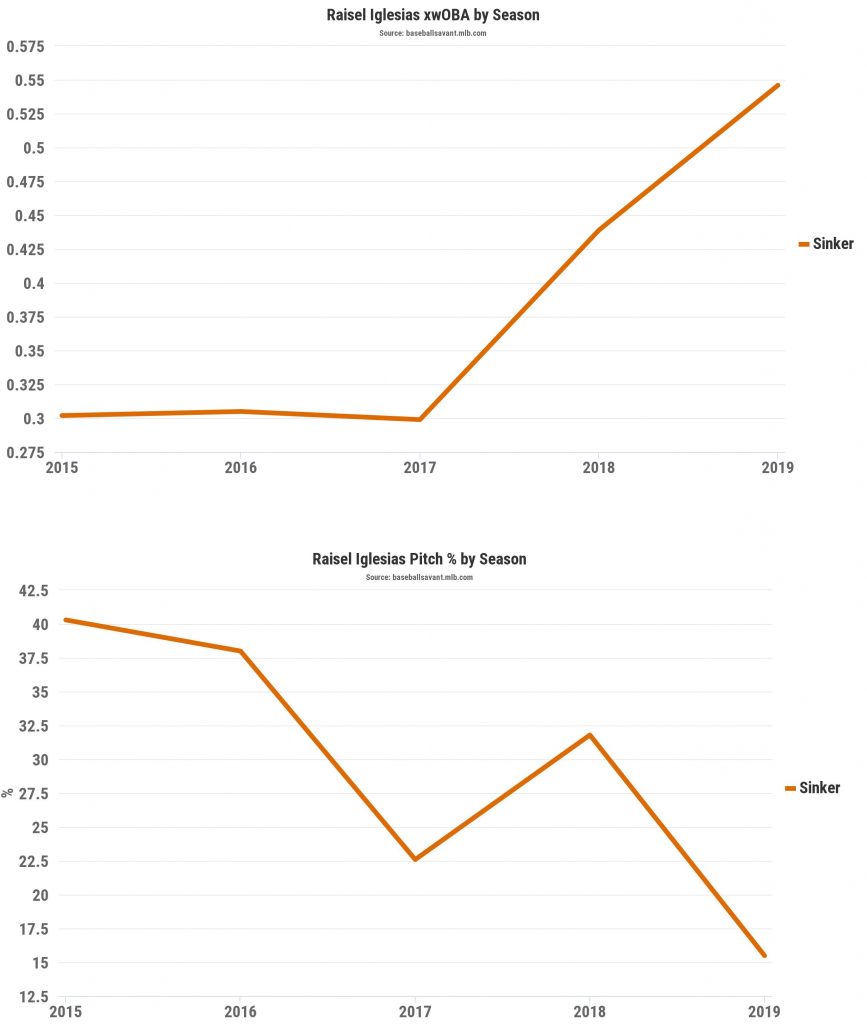 The good news is Iglesias saw the results on his sinker last year and is starting to move away from it. But it has undoubtedly been a bad pitch when he has thrown it this year.

Almost like clockwork, Iglesias could throw the slider down and away to righties or at the back foot of lefties. Here’s the heat map on the pitch for his career through 2018: 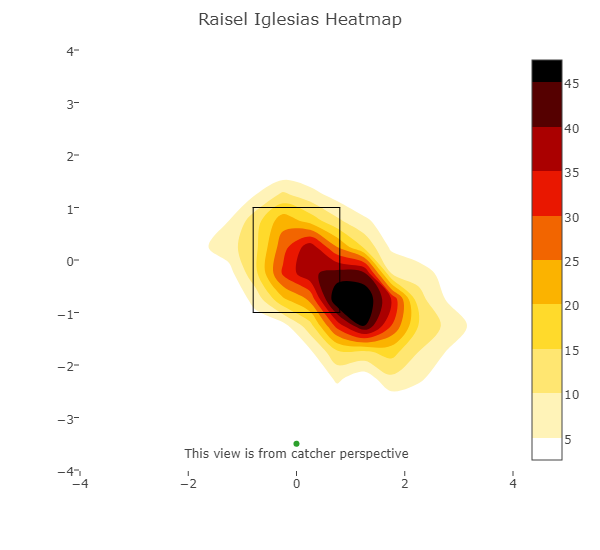 The pitch has taken a 180-degree turn in 2019. You name the metric — it’s worse for Iglesias’ slider this year by a wide margin.

The root of the issue is fairly easy to spot: the right-hander has struggled mightily with his command on the pitch. 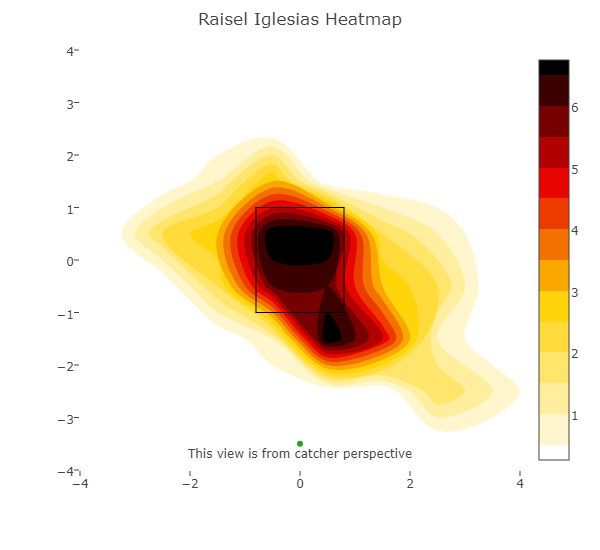 That is not where you want to throw a breaking ball.

Interestingly, the slider’s movement hasn’t changed much. It’s getting more horizontal movement than last year by about an inch, and the vertical movement is right around his career marks. But he’s not keeping the ball down, and hitters are punishing him for it. He’s trusting the pitch less and less, as its current usage is down by three percentage points from last year (26.5% to 23.4%). Until he can regain the feel for it, he’ll have to continue pumping more four-seamers and changeups instead.

Iglesias has shown some encouraging signs despite the bad start. His strikeout rate ranks 18th among 194 qualified relievers despite his struggles with the slider. In place of the breaking ball, Iglesias has mastered his changeup, taking it from very good to elite. No reliever who has thrown the pitch at least 25 times has as higher swinging-strike (34.8%); only two have a higher whiff rate (52.2%). Those are Luis Castillo-esque numbers. The velocity, while down, is still above league average. If he shies away from the sinker, starts pumping more four-seamers up in the zone, and rediscovers the feel for his slider, he’ll be in much better shape.

Check out more of Matt’s pitching analysis at Reds Content Plus (RC+).