The Cincinnati Reds (15-21) will try to recover after being no-hit early this morning. They’ll play the second of three games against the Oakland A’s (16-21) tonight at 10:07 PM.

Sonny Gray will make his return to Oakland Coliseum tonight. Gray made his MLB debut with the A’s and pitched 4.5 seasons in Oakland. He has a career 3.50 ERA in 60 career starts at Oakland Coliseum. He has only made one career start against the A’s, coming last year: 5.0 IP, 9 H, 5 ER, 2 HR, 3 BB, 2 K.

Brett Anderson has one of the lowest strikeout rates in baseball, but the 31 year old continues to be successful by limiting walks and home runs. He is coming off a good performance in Pittsburgh, allowing just 1 run in 6.0 innings. Anderson has a career 5.17 ERA in 3 starts against the Reds, with the last coming in 2016. 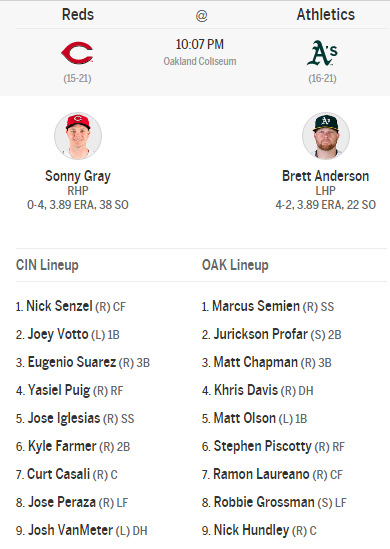 The #Reds and #SFGiants as teams don't have 3 batted balls 111 MPH+ ALL season.

Reds currently have 5 starting pitchers with 30+ IP and an ERA under 4.00 for the first time since the end of the 2014 season.

On this date last year, the lowest ERA by a Reds SP was 4.21 by Sal Romano.

David Bell said Alex Wood's latest exam on his back didn't show anything new and he's going to rest for 2 weeks before throwing again. #Reds https://t.co/veUVyYvGoW

?????????
Due to the NBA game in the arena tonight, parking will be $40 the entire evening. A's prepaid parking passes will still be accepted. Championship Plaza will be closed, and the food trucks will be relocated to Lot A. https://t.co/tH9qJZ59pa

It is never fun to be no-hit, but last night’s game was so bizarre that hopefully the Reds can just shake it off as one of those weird things that happen and move on. The Reds have certainly showed resiliency lately, coming back the next day with big wins after devastating defeats twice in the Giants series. Go Reds!