The Cincinnati Reds (15-20) will begin the first of six games in the Bay Area tonight at 10:07 PM against the Oakland Athletics (15-21). The Reds are coming off a wild four-game series against the Giants. The Reds offense scored 37 runs in the series (their most in a series since 1998) and hit 15 home runs (tying the franchise record for a series). Despite the offensive explosion, the Reds only managed a series split. The Reds did however show impressive resolve on Saturday and Monday after disheartening losses the day prior. The Reds now have a run differential of +23, which is 4th best in the NL. The Reds enter play today 6.0 games back in the division and 5.0 out of the second wild-card spot.

The Reds will make their first trip to Oakland since 2013. This will likely be the final time the Reds will play at Oakland Coliseum as the A’s plan to build a new beautiful new ballpark by 2023. The Reds are 8-11 all-time in regular season games against the A’s. 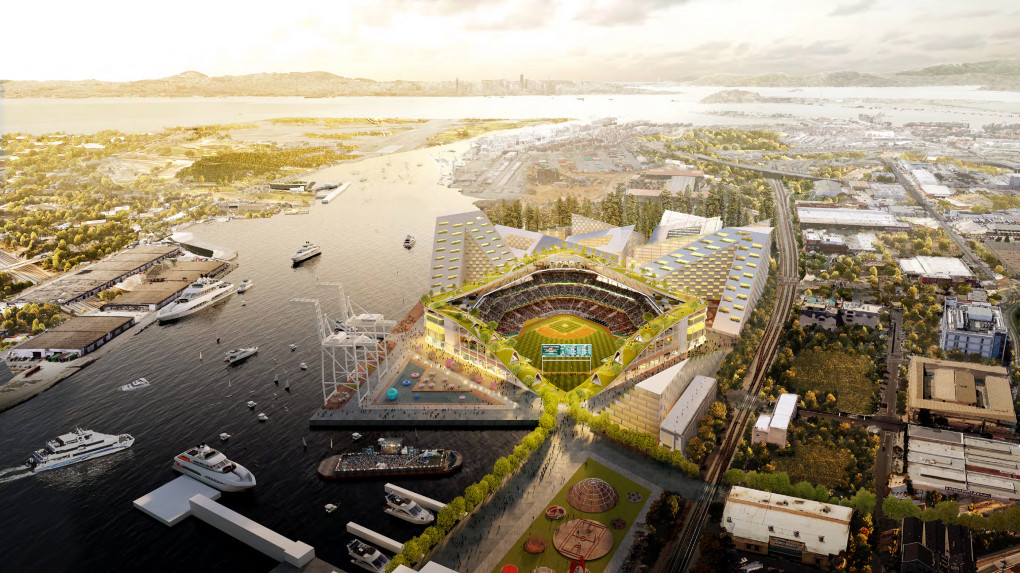 Rendering of the proposed Oakland A’s ballpark that will be located at Howard Terminal in Oakland California. (Courtesy of BIG – Bjarke Ingels Group)

The A’s have lost seven of their last eight games, and they have fallen to last place in the AL West, 6.5 games behind the first place Astros. They have a run differential of -7, which is 8th best in the AL. The A’s have been lead offensively by third baseman Matt Chapman (161 wRC+) who ranks third in the AL in fWAR at 1.8.

33-year old Mike Fiers is having a tough start to the season for the A’s. If you look through his game logs, Fiers has had 3 good starts, 1 mediocre start, and 4 abysmal starts. He has given up 6 home runs over his past 4 starts. The A’s are still on the hook for Fiers for $8 million in 2020, so they are really hoping that he can get right as they can not afford wasted salary.

Derek Dietrich is starting for the sixth consecutive game vs a RHP as the DH tonight. It appears he is now an everyday player vs RHP, which is certainly deserving. Kyle Farmer gets a surprising start vs a RHP. Farmer was 4 for 11 with 2 HR in the Giants series and has an impressive .958 OPS on the season. However, Farmer has a career 88 wRC+ vs RHP. You would think that this could be a spot for Josh VanMeter to get a start.

Nick Senzel is off to about as good of a start as you could imagine. He has a .381 OBP and 181 wRC+. Here are some fun numbers and info:

Nick Senzel hit 2 HRs yesterday in his 4th career MLB game. That's the earliest in his career that a player has had a multi-HR game for the #Reds since at least 1908 https://t.co/rBCmv39pLi pic.twitter.com/PkUMXr8bJ0

Reds OF Nick Senzel, who was called up from the minors late last week, has worn four different uniforms in his first four MLB games. He'll wear yet another combo tonight, as the Reds will be on the road. (h/t @Brenden_Maxwell) pic.twitter.com/HlC576n94h

Defensively, he's tied for the team lead with 1 Out Above Average. #Reds

Greetings from sunny Oakland. I get the pleasure to call #Reds and A’s tonight on @foxsportsoh with Chris Welsh ?@thinkpitch? pic.twitter.com/SdUWAiOvmM

Cincinnati #Reds infielder/outfielder Josh VanMeter wins the International League Player of the Month for the Louisville Bats for his performance in April. This result is shocking to no one.https://t.co/vCrP8SSY2F pic.twitter.com/iezJN9UGxc

The Reds have seven road games against two below .500 teams this week. This is a week that is really important for the Reds to capitalize on before they go on a difficult stretch of games: vs Cubs (3), vs Dodgers (3), at Brewers (2), at Cubs (3). Go Reds!