The Reds hope to make it 2-0 this season wearing their nostalgic throwback uniforms. In the 4:10 p.m. Eastern time start of game three of a four-game series against the San Francisco Giants at Great American Ball Park, the Reds will wear this road uniform from 1911:

Brian Erts has more on the history of this particular uniform in this article here at Redleg Nation.

Before today’s game, the Reds officially promoted Josh VanMeter, who has 13 homers, 31 RBI, and these additionally eye-popping numbers so far at Louisville: .336/.431/.736/1.167. He’s a left-handed batter who, in essence, replaces Matt Kemp on the roster. Surprisingly to many, left-hander Cody Reed was sent down to Louisville after one day on the major league roster and a fairly impressive 2.1 shutout innings of relief with four strikeouts. Apparently the front office wants to give Zach Duke and Wandy Peralta some more chances as left-handed relievers.

If any game in this series has the potential to be a pitching duel, this one is it. Castillo has been arguably the best starting pitcher in the National League in the early portion of the season, and was named the National League Pitcher of the Month for April. Samardzija has some nice numbers in the first month, but his peripherals such as xFiP at 4.94 are revealing.

Cody Reed gave the rest of the bullpen the night off last night with 2.1 shutout innings with four strikeouts. The reward? Well, you know what it was. Therefore, all relievers should be available today.

Yasiel Puig gets a day off today, with Jesse Winker moving to right field and Derek Dietrich starting in left. None of the current Reds position players have a history of success against Samardzija, according to MLB.com: 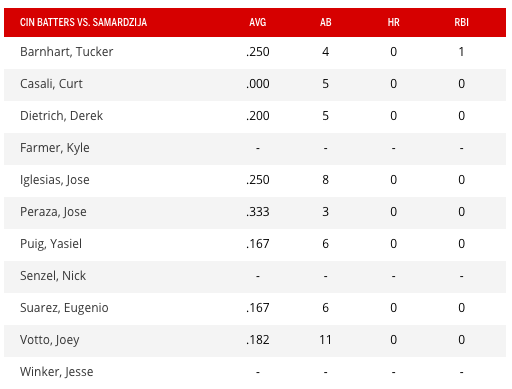 Not one, not two, but THREE postgame showers for @LilSenzii!

The Reds called up Josh VanMeter from Triple-A prior to the game today. You can read all about what he’s changed over the last year to get him to where he’s at today right here. In his last 258 Triple-A plate appearances for the Louisville Bats he’s hit .332/.412/.686.

Interesting numbers on the top Reds hitters in specific pitch counts (meaning that the final result of an at-bat occurs on that pitch):