Tonight the Reds began the process of atoning for last night’s, um, development.

Mouthwatering: The Reds have five more games against the Giants in the next eight days.

Tanner Roark threw 113 pitches over 6.2 innings. Roark walked two and struck out seven. Some combination of the Reds building an early lead and the Giants not-so-potent lineup convinced Roark to nibble less. Roark has been throwing his change just 7.7% of his pitches, tonight he more than doubled that. 20 of Roark’s 113 pitches were changeups, 6 of which went for swinging strikes and another two for called strikes.

Cody Reed gave the Reds the kind of relief pitching they needed last night. Called up from Louisville earlier in the day, Reed entered the game in the 7th and struck out Stephen Vogt to end a Giants mini-rally against Roark. Reed continued in the 8th with a clean inning, including two more Ks. Reed finished the game with another clean inning in the 9th, striking out Kevin Pillar for a pizza-providing K. That’s four Ks and 0 BBs for Reed. 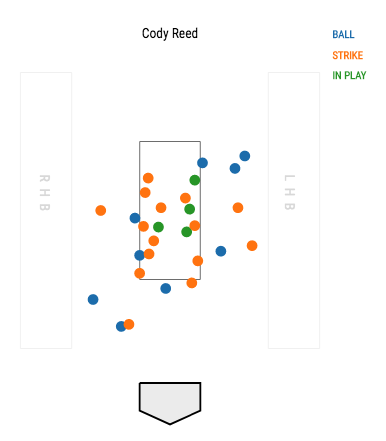 The above is a beautiful Statcast graphic for Reed. Lots of strikes, nothing in the middle of the zone.

In my book, Cody Reed has already jumped Wandy Peralta and Zach Duke as bullpen lefties.

If Reed sticks, and of course he should, he adds to an interesting power-arm core of the Reds bullpen: Robert Stephenson, Michael Lorenzen, Amir Garrett and Reed.

The Reds offense is getting healthy/waking up against lousy San Francisco Giants pitching.

The Reds got on the board in the 1st with a Jesse Winker double high off the left field wall followed by a Yasiel Puig line drive single to left. The Reds offense did serious damage in the 2nd thanks to a series of three improbable events: (1) a Jose Peraza walk, (2) a Tanner Roark single, and (3) Tucker Barnhart legging out a fielder’s choice. Joey Votto walked. Then Giants starter Dereck Rodriguez grooved (“That’s not a real good pitch.” — Jeff Brantley) a fastball that Eugenio Suarez hit to deep right center. Suarez didn’t miss, he hit it 104.2 mph and 402 feet. The score was 5-1.

The offense continued to take batting practice off Rodriguez. Tucker Barnhart, Derek Dietrich and Nick Senzel hit solo homers over the next few innings. Senzel’s maiden homer went 379 feet to the opposite field. Yasiel Puig got one of his own in the 7th (404 feet).

You love to see it! Nick Senzel goes yard for the first time in his big league career! #BornToBaseball pic.twitter.com/9JIzhnHiYU

Nick Senzel hit a ball 398 feet that Giants OF climbed up on the centerfield wall to catch.

Senzel added another walk, making three in his first two big league games. Yes, please. Senzel has as many walks as Jose Peraza.