Perusing the Baseball Savant leaderboards is a great way to kill time if you are a baseball fan. This week, I stumbled upon pitch framing data that I had not seen on the site before, so I decided to dive right in. Turns out, there is some good news for Reds fans.

Since he started his career with the Reds, Tucker Barnhart has built a reputation as a strong defensive catcher. He provides good stolen base prevention, blocking abilities, and has good rapport with the pitchers, understanding their strengths and weaknesses. While current defensive metrics available to the public are far from perfect, one area that Barnhart has always struggled in is pitch framing, the ability to get incremental strike calls on borderline pitches. This year, however, Tucker has flipped a switch.

From 2015 to 2018, Barnhart ranked as the second worst catcher in all of baseball, giving away 31 runs or roughly three wins, just on his poor receiving. Last year was by far his worst performance, driving -18 runs with less than 44% of non-swings called a strike. Below is the breakout by section of the plate. 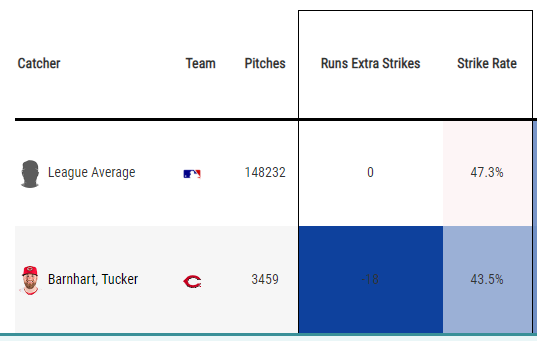 The inside and outside parts of the plate get worked a lot by pitchers. Barnhart’s numbers in those areas, while better than his overall rates, lagged league average by a good amount. He was much closer on the top and bottom of the zones and even outperformed average on the down and in zone. Still, a 3.8% overall gap is significant. 3 or 4 missed calls a game, especially if at the wrong times, can make a big difference.

This season, however, Tucker is out to a great start and is actually creating positive runs with his framing. 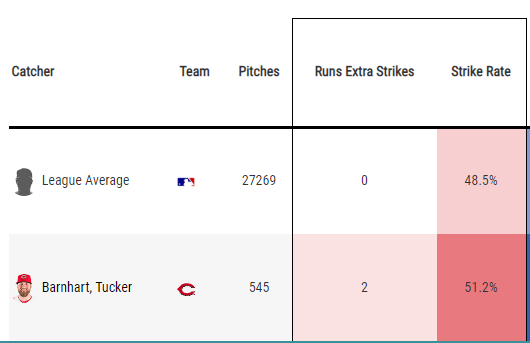 Although the top of the zone is now a weak spot, both inside and outside, as well as down, are significantly improved. He is converting over 70% of non-swings on pitches to sides into strikes and is above leave average in six of the eight zones. Jumping from 43.5% to a 51.3% overall strike rate is a massive improvement.

This past offseason, FanGraphs added in Pitch Framing to their catcher WAR totals, which did not bode well for Barnhart. FanGraphs also gave Tucker poor marks last year, pegging him for -14 framing runs and driving his overall WAR down to -0.3. Tucker has proven he deserves playing time at the Major League Level, and the Reds clearly agree by signing him to an extension last year. But with a more wholistic view (admittedly not perfect, but at least directional) it should make a little more sense why there were rumors of the front office looking into J.T. Realmuto trades this past winter. It is still very early, but this framing improvement could be a significant boost to Tucker’s overall value to the Reds.

An important aspect to address is that the Reds pitching staff is significantly improved from last year. The ability to make good pitches obviously factors into a catcher’s ability to frame them well. Looking at the same data set for the entire league, there is a relationship between K/BB ratio and Framing Runs, but it is not all that strong. Having a good pitching staff does not make a catcher a good pitch framer, and vice versa.

The top four catchers above have played on teams with very good pitching, yet only Yasmani Grandal has been exceedingly strong at framing. Brian McCann and Wilson Ramos have driven negative value. On the flip side, Tyler Flowers and Caleb Joseph have contributed positive framing value despite working with pitchers that were just as bad as the Reds.

Pitch framing is a skill just like hitting and pitching, except with a bit less of an impact. Catchers are already one of the more integral players on the field and this stat further quantifies their total contribution to their teams. While having a better pitching staff this year has most likely contributed to Barnhart’s improved numbers, the pitching staff is not the sole factor of a catcher’s framing ability. It appears that Barnhart (maybe with the help of a new, data-driven coaching staff?) has made a point to improve this area of his game.