To this point, the career of Anthony DeSclafani hasn’t gone how many envisioned it.

A promising young pitcher coming through the Blue Jays and Marlins systems, he eventually made his way to the Reds and had a solid rookie year in 2015 (4.05 ERA, 3.97 xFIP). There was hope he’d turn into the team’s most dependable starter after the departures of Mike Leake and Johnny Cueto. The presumed Opening Day starter in 2016, he went down with an oblique strain and didn’t debut until June. Although he pitched in only 20 games that season, he had the best year of his big-league career. In 115 innings, Disco had a 3.28 ERA, 3.96 FIP, and 3.99 xFIP with a personal-best strikeout rate (20.7%).

Then he hit more speed bumps. He’s spent the last three seasons fighting to get back where he was in 2016.

DeSclafani missed all of 2017 with a partially torn UCL. After getting back on a major-league mound in June 2018 following another oblique strain, he had trouble picking up where he left off. It was understandable after a long layoff, but that doesn’t diminish how frustrating it was for him and the Reds. He posted a career worst 4.93 ERA and 4.83 FIP. The 3.86 xFIP, however, gave more reason to hit pause on the panic alarm.

DeSclafani’s strikeout rate rose again, this time to 22.3% — right at league average — despite a year-and-a-half layoff. His walk rate remained solid (6.2%). Those two important components, in addition to a healthy offseason and spring training, gave room for optimism heading into 2019.

But Disco still had some areas to work on. His home-run rate skyrocketed to 1.88 per nine innings last season, sixth-worst among all pitchers with 100 innings. He was also awful against lefties (.361 xwOBA vs. .265 vs. righties) and struggled badly the second and third time through opposing lineups. The latter is a common issue for starting pitchers, but DeSclafani’s struggles were particularly notable. The numbers get ugly in a hurry.

The problem could be partly attributed to an inability to change speeds, which former interim manager Jim Riggleman discussed at the end of the season.

“He’s throwing very well, but I think to become the complete pitcher that he needs to be, he’s going to have to add a third pitch that’s softer. Something to get them off his fastball and hard slider because these hitters are just figuring it out.”

After the elbow injury, DeSclafani nearly abandoned his curveball, throwing it only 3.6% of the time. The breaking ball’s disappearance led to two problems: it took away his best putaway pitch and prevented him from changing speeds effectively.

Last year, he essentially limited himself to a four-seamer, sinker, and slider. Those accounted for 92.8% of his total pitches for the season. Their velocities only varied by an average of 6.8 mph — not ideal for keeping hitters guessing and off balance. As a result, they sat on his fastball, often to ugly results. The slider was a quality pitch for him, but it became less effective as games wore on.

When he threw the curveball, it didn’t have the same bite. It lost more than two inches of vertical movement and an inch of horizontal movement from 2016. The result: a flatter, more hittable pitch. Before 2018, he had never given up a home run on his curve in 450 chances; he gave up three last season in only 64 pitches. Hitters managed a .795 wOBA and .572 xwOBA against it. He also couldn’t control it well enough to get batters to fish outside the strike zone. Its chase rate dropped from 28.9% in 2016 to 16.1% in 2018. The SwStr% dropped to 9.4%.

It wasn’t surprising, then, that DeSclafani basically stopped using the pitch after the month of June. 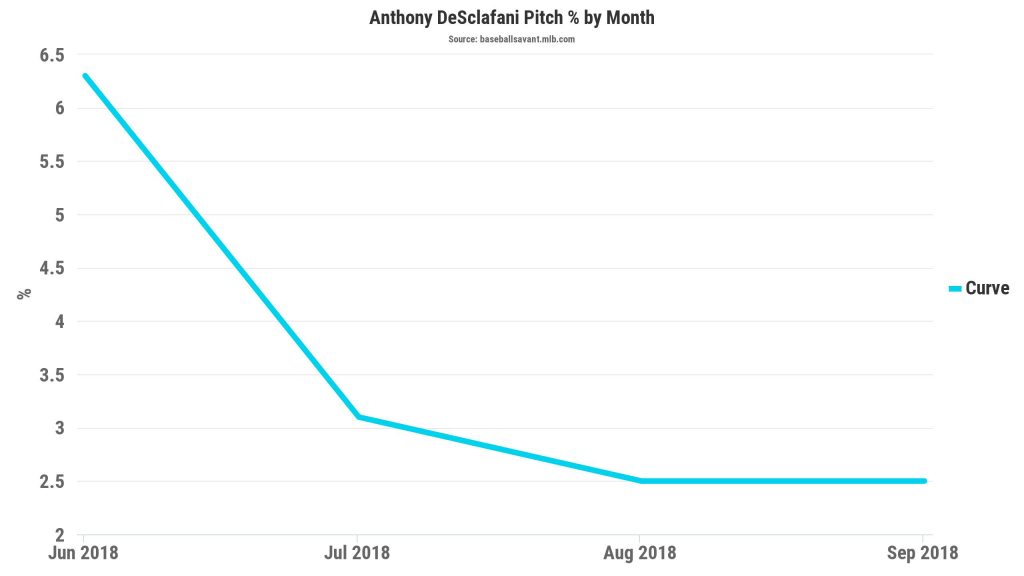 DeSclafani made it a goal to focus on his curveball and changeup in the offseason. While he’s barely thrown the changeup (two total uses) in 2019, his curveball rate has gone way up. Through four starts (pitch tracking data was not available for his other start in Monterrey, Mexico), he’s upped his curveball usage to 16.3%. In a small sample, he’s registered whiffs on 20.8% of curveballs he’s thrown while getting a whiff on 52.4% of swings. Among starting pitchers with at least 10 swings on their curves, that’s by far the highest whiff rate; Ross Stripling is next at 38.6%.

The curveball is back to its pre-2018 vertical movement as well (it still has about three-quarters of an inch to go to match its 2016 horizontal movement). 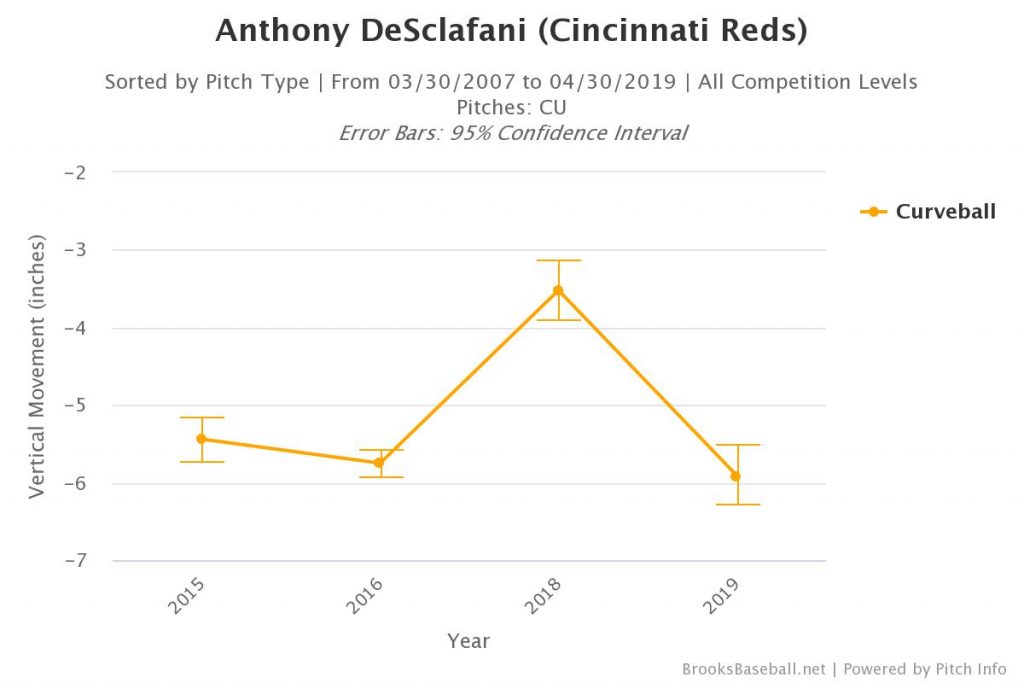 The four-seam fastball is also contributing to Disco’s early-season strikeout increase. With a velocity increase from 93.5 last year to 94.1 mph thus far this year, he’s missing more bats with the pitch.

(Note: Because I don’t think I’ve made this clear in previous posts and have admittedly used these terms interchangeably when I shouldn’t have, I want to quickly clear up the difference between swinging-strike rate (SwStr%) and whiff rate (Whiff%) for those who don’t know. SwStr% is the percentage of swings and misses on all pitches thrown; Whiff% is the percentage of misses on all swings.)

DeSclafani’s velocity increase bodes well when paired with the Reds’ new emphasis on pitching up in the zone and a bump in spin rate from an average of 2,199 rpm in 2018 to 2,297 in 2019. The spin rate is still average overall, which isn’t great for a fastball, but more spin does lead to more swings and misses, especially when the ball is thrown up in the zone. A ball with higher spin has less drop, which means hitters often swing under it. It’s no coincidence that Justin Verlander and Max Scherzer get so many whiffs on their fastballs. Among the top-10 leaders in SwStr% on the four-seamer since 2015, nine have an above-average spin rate (2,257 rpm).

Average spin rate isn’t ideal because the four-seam fastball doesn’t appear to rise or drop. It stays flat, and it’s easier to hit. Disco is attempting to work around that by elevating the pitch a lot more, an approach made more effective by the velocity increase. 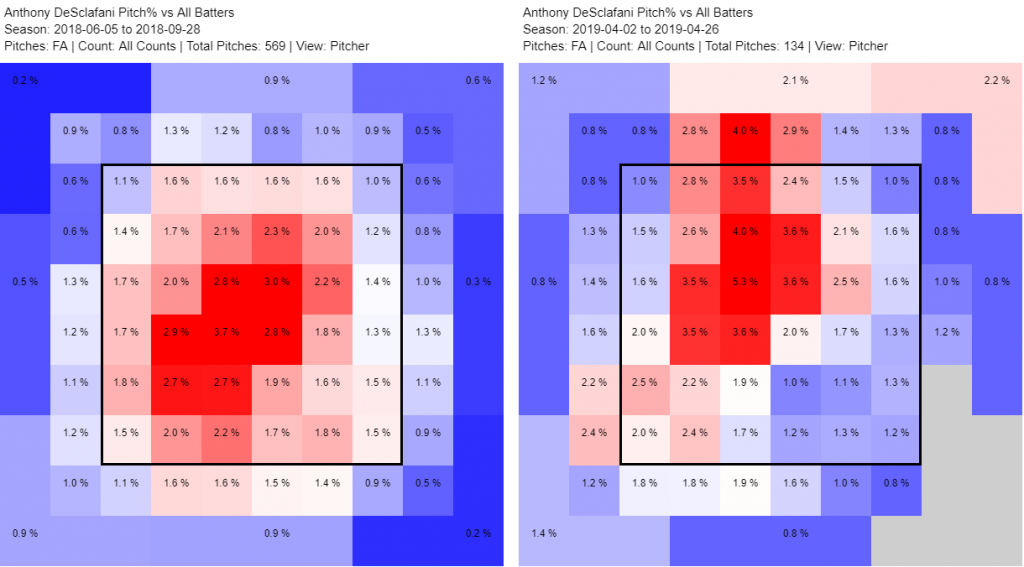 These are DeSclafani’s most notable changes in the positive direction. How is that affecting him in the areas he struggled last year?

The home run rate is still too high at 1.78 per nine innings. Notably, only two of five were hit by lefties, an early improvement over last year when they hit 15 of the 24 bombs DeSclafani allowed. All five have been on fastballs left over the middle of the zone. Disco’s control and command haven’t been as sharp as in previous seasons, with his walk rate sitting at an unusually high 10.1%. That, in conjunction with an average spin rate on the fastball, may explain part of his continued problem with the home run ball despite doing better at mixing speeds.

He may also be relying on his four-seamer too much, with its usage jumping from 31.6% to 42.5%, giving hitters a better idea of what’s coming when DeSclafani is trying to get ahead in the count or get back in the at-bat when behind in the count. Two of his homers have come on the first pitch — a traditional fastball count — and two others came when he fell behind in the count.

Left-handers are still hitting DeSclafani hard when they step into the batter’s box. The large split still exists even after the tweaks (.398 xwOBA vs. lefties, .248 against righties).

This year, some of his struggles with lefties trace back to his other breaking ball. Unfortunately, DeSclafani’s slider has suffered with increased curveball use. It’s getting nearly two fewer inches of drop, its swinging-strike rate has fallen from 19.4% to 9.6%, and its whiff rate is down from 37.1% to 21.9%. This is a significant issue against lefties. The slider has easily been DeSclafani’s best pitch against them in his career. Up to this year, it held them to a .188 BA (.190 xBA), .290 SLG (.285 xSLG), and .241 wOBA (.246 xwOBA).

The biggest issue, though, is DeSclafani has increased his four-seam usage against lefties significantly. 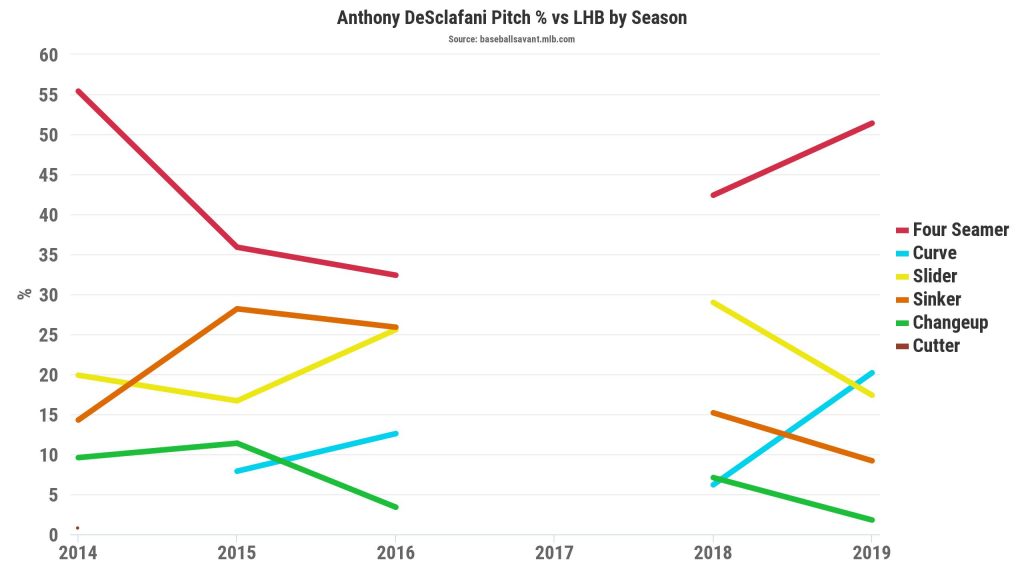 It’s by far his worst pitch against them, so throwing it over half the time doesn’t seem advisable. Last year, they had an average exit velocity of 93.4 mph and an xwOBA of .452 against it. While he’s throwing it harder, it isn’t helping. Lefties are at 93.8 mph and .548 xwOBA so far this year. If he can regain a feel for his slider to replace some of that four-seam usage, he’d be far better off.

On the bright side, DeSclafani is doing better in the early going when it comes to facing batters for a second and third time. Now, though, he’s running into trouble in his first trip through the lineup.

That said, something interesting is happening with his pitch mix each time he faces the opposing lineup. Take a look:

Last year, he essentially showed his whole hand to hitters the first time he faced them. They saw his four-seam, sinker, and slider each over one-quarter of the time. Adding the curveball back to his repertoire has allowed him to mix his pitches better. He’s featuring his four-seamer the first time he faces hitters and dialing it back in favor of his breaking balls later in games. That’s a possible recipe for success as the season moves along.

Overall, the good news is DeSclafani has made some changes that could help him rediscover his old form. We may look back and laugh at these early-season sample sizes later on. The fastball velocity is up, and his time spent working on the curveball is paying off. The strikeout rate is nothing but encouraging, and his walk rate will likely come down toward his career mark. In flashes, the Reds are seeing the reliable No. 2-caliber pitcher they hoped DeSclafani would become three years ago. If he can get the feel for his slider back, it’ll go a long way toward fixing his problem with lefties and the home run ball.