Flushing Meadows in Queens, New York has been home to the New York Mets since 1964. Since then, the Mets produced six Cy Young Award winners: Tom Seaver (1969, 1973, 1975), Dwight Gooden (1985), R.A. Dickey (2012) and Jacob deGrom (2018) who the Reds face tomorrow night. It was hard not to reflect on that storied history as Luis Castillo pitched from that stage tonight. Yes, it’s just the last day of April. But it isn’t unreasonable to watch the 26-year-old Castillo perform and wonder whether he has a Cy Young season or two in him.

Castillo had a nice family and friends cheering section at Citi Field tonight. The guy in the front in the red sweatshirt is his brother. 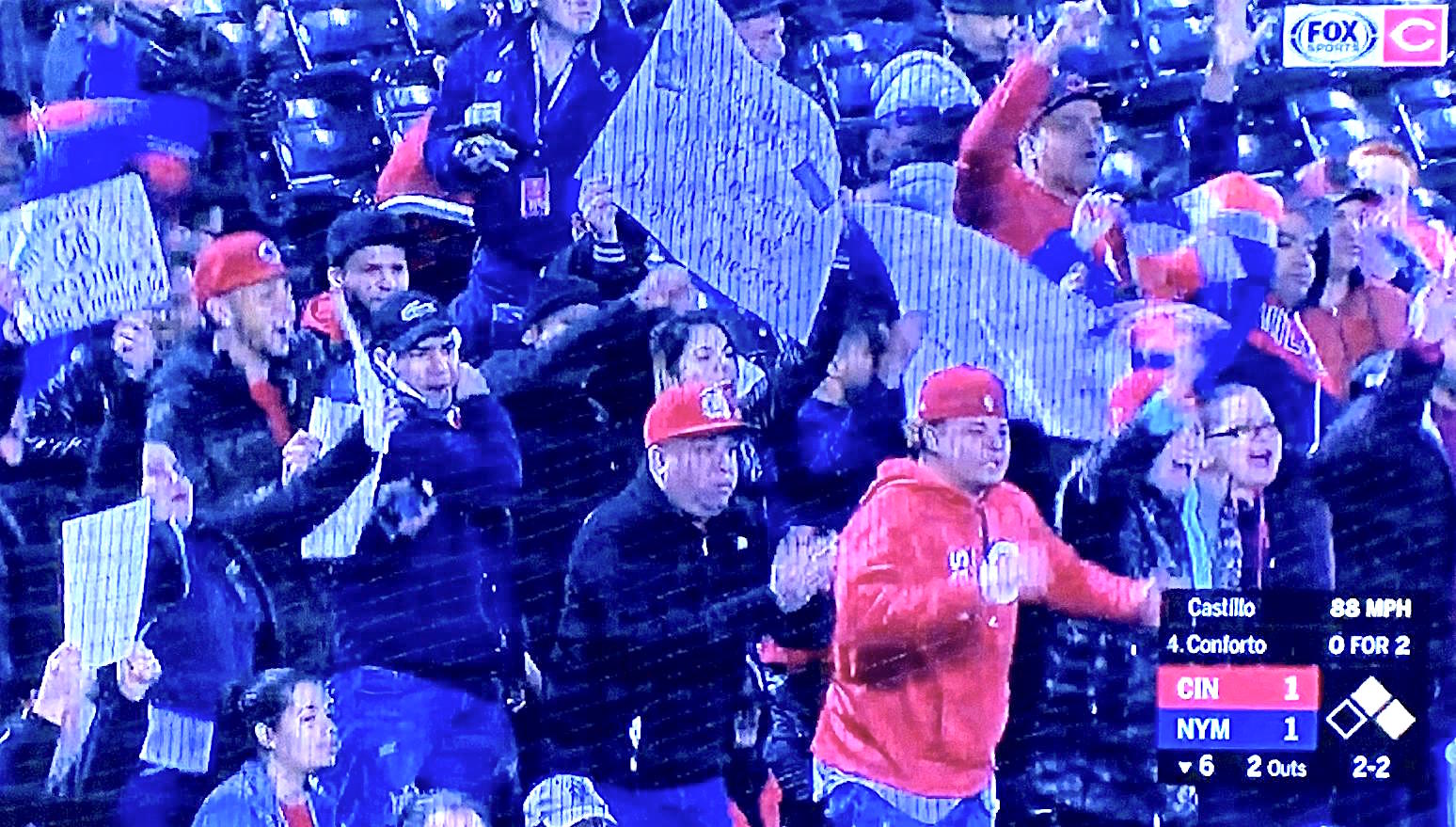 Luis Castillo was his usual dominant self through the first six innings. The only run he’d surrendered scored on a two-out drag bunt. Then our old friend Todd Frazier reprised his Home Run Derby form and swatted Castillo’s first pitch of the 7th inning, a 96.4 mph fastball, 413 feet over Citi Field’s center field fence. Castillo finished with 7 Ks and 3 BBs. He was lifted with two outs in the 7th.

Robert Stephenson entered the game and struck out Dominic Smith on 3 sliders, ending the Mets threat. Stephenson returned in the 8th and gave up a leadoff walk before striking out the dangerous rookie Pete Alonso. Manager David Bell lifted Stephenson for Amir Garrett. Garrett struck out a batter for the second out, then Mets RF Michael Conforto singled on a ground ball just out of the reach of Jose Peraza, scoring the Mets third run.

David Hernandez, pitching the third night in a row for the first time in his career (that’s really hard to believe), retired the Mets in order, striking out two in the 9th, producing free baseball.

Raisel Iglesias pitched the 10th inning and gave up a double, single and a sacrifice fly, allowing in the winning run.

In the debate over whether the Reds offense is performing well, you’d have to put tonight’s game in the pile of evidence for “no.” Facing 36-year-old Jason Vargas, he of xFIP 6.66 (7.20 ERA), the Reds offense was largely silent. Silent that is until the 9th inning rally off of fading Mets reliever Jeurys Familia.

The Reds first run was the result of Eugenio Suarez’s 7th home run. Suarez drove a Vargas 83.7 mph fastball (you read that right) 383 feet in the 6th inning.

The Reds seemed all but finished in the 9th inning after Tucker Barnhart and Derek Dietrich struck out, needing two runs. Then Jesse Winker drew a walk. Jose Iglesias followed with a single to CF. Kyle Farmer pinch hit and with an 0-2 count flipped a ball over the first baseman’s head to score Winker, cutting the Mets lead in half. Jose Peraza grounded a single up the middle, scoring Iglesias, tying the game. Joey Votto walked to load the bases. But Suarez struck out.

So Much Breathless Senzel Anticipation

The Louisville Bats played the Toledo Mud Hens tonight. Nick Senzel led off and played CF for the Bats. Senzel struck out his first three at bats before singling in the 8th inning.