The Reds got off to a great start in Queens when they scored four runs in the second inning. However, starting pitcher Tanner Roark was unable to hold that lead as walks burned him tonight. The Mets tied the game at 4 in the fourth inning when Wandy Peralta walked in the tying run on four pitches.

The Reds bullpen after Peralta got the job done, throwing 5.1 scoreless innings. Jesse Winker hit a 415 foot blast in the top of the ninth off Mets closer Edwin Diaz to give the Reds a 5-4 lead. Raisel Iglesias finished off the Mets with two scoreless innings, including striking out the final four hitters. 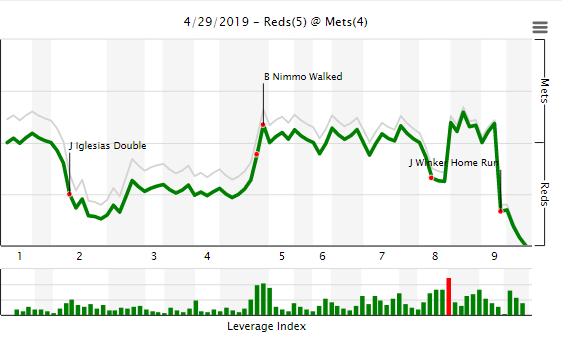 According to Fangraphs WPA statistic (winning percentage added), the most important play of the game was Jesse Winker’s solo home run with 2 outs in the top of the 9th, giving the Reds a 5-4 lead. That play increased the Reds chances of winning by 42.6% (from 40.8% to 83.4%).

Jesse Winker blasted a ball 415 feet (104.5 EV) for his 8th home run of the season (new career high in HR). This is the same guy that hit only 5 home runs in an entire season in the minors in 2016. He was pumped too after the bomb. You have to love Winker’s passion.

Jose Iglesias, Tucker Barnhart and Jose Peraza all had RBI singles in the Reds 4-run second inning. They made Wheeler pay for walks to Puig and Schebler to get the inning started.

Jose Peraza had a 2-hit night in the leadoff spot. They were both legit hits too with both having an xBA > .500.

Scott Schebler walked twice, and he is now remarkably tied with Joey Votto for the team lead in walks with 14. Schebs has obviously had a miserable start to the season, but it is good to see him grinding out his plate appearances.

Joey Votto had a walk and a hit. Votto worked a great first inning AB before collecting an infield single with an exit velocity of a whopping 42.1 MPH. Votto also hit a ball 395 feet that resulted in an out (.620 xBA). Baseball is a crazy game.

Tanner Roark could not get out of the 4th inning after walking the bases loaded. Roark was given a 4-0 lead in this one and proceed to give up 4 earned runs. His last inning was especially brutal as he had the #8 spot in the lineup up with two outs and no one on base. Roark proceed to walk the #8 hitter, give up a single to the pitcher, and then he walked the next two batters.

Wandy Peralta came in with the bases loaded in the 4th, and he walked the first batter on four pitches. Peralta has been great this season so far, but his control issues are something of concern as this season moves on.

Jose Iglesias has got a lot of praise this season for his bat. I thought to myself when he had an RBI single tonight, “wow, how good has this guy been?”. I looked up the numbers to back that……and…….well……he hasn’t really been that good. Iglesias now has an 88 wRC+ following tonight’s 2-hit performance. That is right around his career wRC+ of 83 and his 2019 projected number of 80. That type of production is certainly fine given his incredible defensive ability, but his overall offense has been below average despite his .297 AVG. This is due to the fact that he has only walked 4 times and has a total of just 5 extra base hits.

David Bell decided to bring in Wandy Peralta with the bases loaded in the 4th inning. Peralta has been great this season, but this is the same pitcher that had a 6.15 BB/9 last season in 45.1 innings. The move should have been Garrett there. I have been a big Bell fan overall, but he has not delivered the promise that he would be progressive with his usage of relievers outside of going to them quickly. He did bring in Iglesias in the 8th inning, but he also called for a bunt in the 8th inning against a pitcher that was struggling to throw strikes.

Josh VanMeter continues to rake for Louisville. Nick Senzel was also 3 for 6 with a home run.

VanMeter’s second homer of the game gives him 10 HR & 27 RBI this season, both LEAD the league.

Oh yeah, and he has 7 RBI tonight. pic.twitter.com/eCaiL0RKsp