The Reds beat up on the St. Louis Cardinals as a great way to kick off a seven game roadtrip. Peraza, Votto, Suarez, Winker and Puig all hit home runs. It was the first time in Reds history that batters hitting 9 through 4 in the order all homered in the same game.

Anthony DeSclafani had his second consecutive strong start for the Reds. He held the Cardinals scoreless over six innings. The Reds broke the game open with six runs in the top of the 9th inning, and they forced the Cardinals to bring in a position player to pitch. The Reds are now 10-6 over their last 16 games following their 1-8 start to the season. 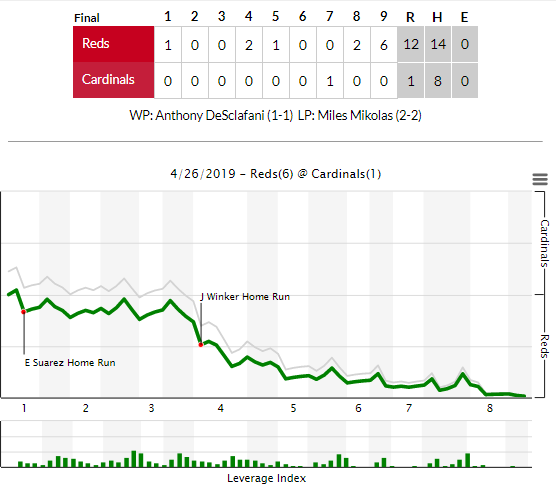 According to Fangraphs WPA statistic (winning percentage added), the most important play of the game was Jesse Winker’s solo home run in the 4th inning with 0 outs, giving the Reds a 2-0 lead. That play increased the Reds chances of winning by 11.1% (from 57.5% to 74.4%).

Jesse Winker hit his 7th home run of the season. That already matched his total from all of last year. This is the same guy that hit only 5 home runs in an entire season in the minors in 2016.

Curt Casali had three hits tonight, including a bases clearing double to really blow the game open. He is now hitting .306/.342/.444 on the season.

Scott Schebler had a pair of walks. Jose Iglesias also had two hits.