Reds manager David Bell took Jesse Winker out of the game on Tuesday evening with the bases loaded and a left-handed pitcher on the mound. The Reds were up one run in the 6th inning at the time. It was not the first time that Bell has pulled Winker against a left-handed reliever, but it was one of the biggest spots of the season that he did so.

There is a lot of debate about if Winker should or should not get playing time against lefties. It is fairly easy to look up Winker’s career OPS vs LHP of .566. The first thought when you see that number is probably “small sample size.” Winker has 105 career plate appearances against lefties, so while that is far from enough to make any definitive long-term decisions, that is quite a few unsuccessful attempts.

David Bell and the Reds front office are assuredly looking further than just Winker’s first 105 plate appearances against lefties in the big leagues. Winker has failed to hit against lefties at any major level. Here are his minor league numbers vs LHP:

Those are near Billy Hamilton level numbers. There is simply no denying that at this point in his career, Winker is not a good hitter vs lefties. When you combine that with his career -19 defensive runs saved, it makes it all the more wise to pull Winker late in a game for someone like Phillip Ervin against a lefty.

The next part of the debate is the development. Does benching Winker vs LHP now mean that he will never learn to hit them? The brutal truth is that Winker will probably never be good enough against lefties.

I looked up numbers for LHB vs LHP since 2000. There are 76 players that had 1,000+ plate appearances. 47 of those batters were below average hitters in those situations. 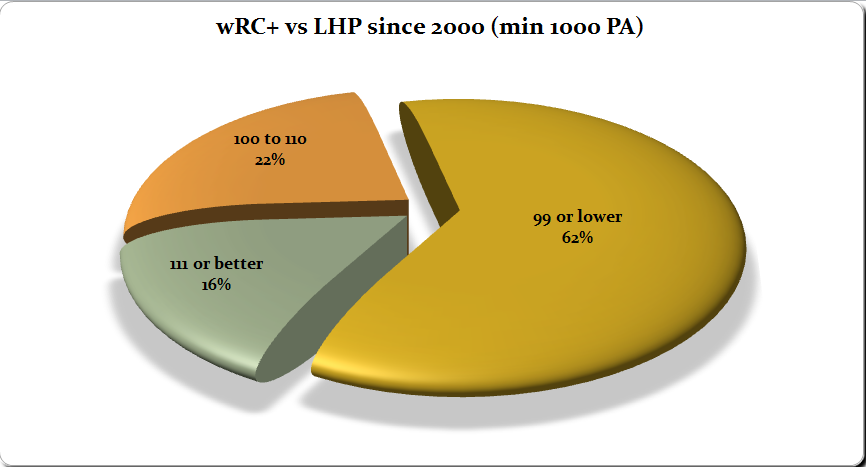 Some of the players on this list that were really bad are surprising: Jay Bruce (89), Chris Davis (87), Ryan Howard (85), Jason Heyward (82) and Eric Hosmer (81). Davis, Heyward and Hosmer are being compensated very well also.

It should also come as no surprise that the best LHB vs LHP over that span is Joey Votto, who has a remarkable 142 wRC+. The next best is Jason Giambi all the way down at 125. It would not be wise to compare Winker to Votto as a reason for expecting him to become a good hitter against lefties. Votto is a special breed.

The good news for Jesse Winker is that he absolutely destroys right-handed pitchers. Winker has a very good .901 career OPS vs RHP. This post shouldn’t be an indictment of Winker’s shortcomings, but rather that there are probably dozens of LHB throughout the MLB that shouldn’t play regularly vs LHP. It would probably be in the Reds best short and long term interest to play Winker sporadically against lefties and in low leverage situations. If Winker ends up drastically improving and beating the odds, that would be terrific, but it should not be expected.

All stats include games played through April 23, 2019.