The Reds offense got off to a great start on Wednesday night when they collected three straight hits off Mike Soroka to start the game. The Reds were only able to scratch across one run in that inning and two more hits the rest of the night. Tanner Roark battled through five innings, but a Yasiel Puig error gave the Braves the lead in the fifth inning. They would go on to win 3-1. 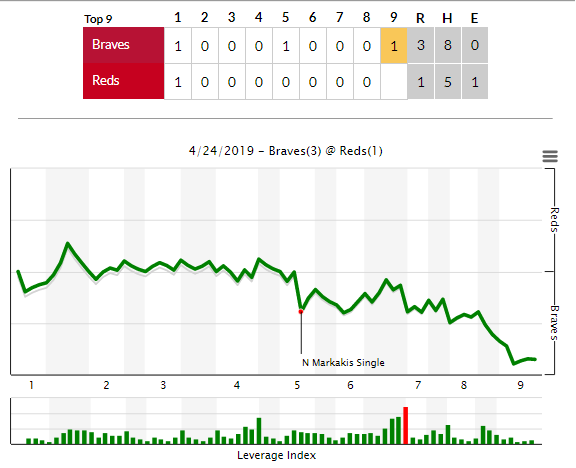 According to Fangraphs WPA statistic (winning percentage added), the most important play of the game was Yasiel Puig’s error on a single by Nick Markakis off Tanner Roark. Runner from first base scored, Markakis to third base with 1 out. That play decreased the Reds chances of winning by 19.2% (from 37.1% to 30.5%).

Jesse Winker had two hits, including an RBI single in the first inning.

Joey Votto lead the game off with a walk and had 2 walks on the evening. I really like him in the leadoff spot. Opposing pitchers having to face that tough of an out right away is nice.

Tanner Roark gave up a home run on the first pitch of the game to Ozzie Albies. Roark survived the night despite 3 walks and a HBP thanks in part to some good luck. Roark had two lineouts against him that had expected batting averages of .920 and .680. Roark’s final line looked decent: 5.0 IP, 5 H, 1 ER, 3 BB, 4 K. Roark’s FIP on the night did not look so good: 6.52

The Reds offense got off to a great start with three straight hits, but only mustered 5 for the entire night and just 1 run. This was the 6th time this season that the Reds have score 1 run or less.

Yasiel Puig had a brutal misplay in the 5th inning. He came charging too hard for a ball and let what should be a single (runners on first and second) be a run scoring triple.

Robert Stephenson walked the leadoff batter he faced in the 9th inning, leading to a big insurance run when he gave up a double to Ozzie Albies.

One really cool moment in tonight’s game came after the top of the 5th. Tanner Roark went up to Yasiel Puig as the two players were entering the dugout and was clearly trying to encourage Puig after his error.

Scott Schebler had a brutal break in the bottom of the 6th. He pinch-hit with the bases loaded and hit a lineout to Freeman. The exit velocity was 102.7 and the expected batting average was .420. What a tough break for Scott.