Be honest with me for one second. Have you ever watched the Reds struggle to score runs (first 9 games of the year), go on an offensive tear for a game or two (21 runs scored vs the Marlins), and then think that they “used up” all their offense and are destined to go back into a slump? I have, and that is why I did some research into the idea that the Reds offensive production for a game tomorrow may be influenced by how they performed in a game today. In terms of my theory, the numbers do not support it at all. However, there was one takeaway that could somewhat be applied to the current state of the Reds offense.

Looking at the past 1500 Reds games (dating back to September 2009), I calculated the average number of runs scored in a game that immediately followed a prior game. I factored out off-days, All-Star breaks, and off-seasons to ensure I only captured games where “momentum” was immediate and could be a real factor.

The average number of runs scored over the time frame was 4.3. Based on a formula that creates four groups based on standard deviation from the mean, the data fell into the following quartiles:

The first connection I checked was if there were more low scoring games immediately following a high scoring game. The table below shows that is not the case, and over the last ten years, was less likely to happen to the Reds. 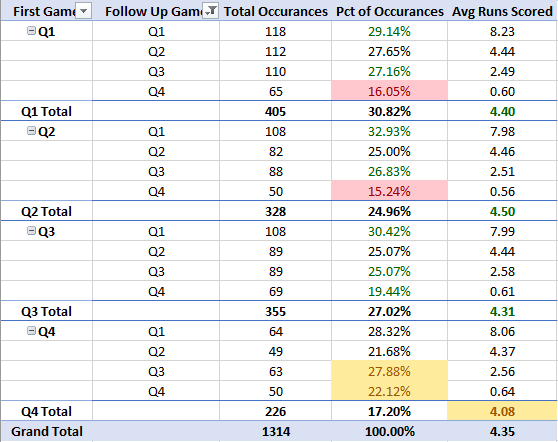 If you do not like reading tables with numbers as much as I do, here is a summary:

Stopping here for a minute, we can see that the Reds actually had a higher likelihood of posting another high score and scored 3 or less runs only 43% of the time.

The red highlighted cells show that when the Reds scored 4 or more runs, it was less likely that they would score 1 or less runs the next game. The much more common and equally realistic occurrence was anywhere between 2 and 8 runs.

Also similar to the first two quartiles but with a higher chance of scoring 0 or 1 run. On to the last one.

Here is where we see the biggest change in pattern by far, as the percent of occurrences of less than 3 runs jumps all the way up 50%. It is not huge, but it definitely does not fall in line with the other groups. The other interesting data point is the average runs scored in the next game. Quartiles 1 to 3 range from 4.3 to 4.5, while Quartile 4 sits at 4.08. Again, not a huge difference, but enough of a variance from the other groups that it seems to point to something.

To follow up on this idea that poor offense could be “contagious” from day to day, I looked at each number of runs scored per game and the average runs scored on the following day. 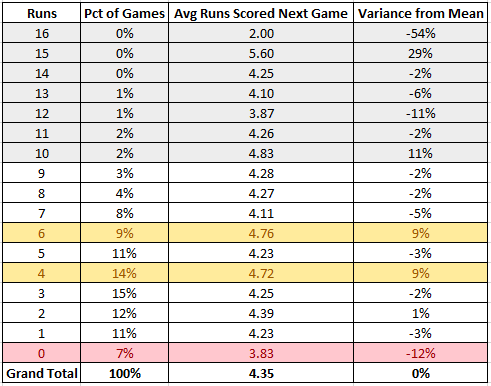 Factoring out some of the outliers at the top (only 6.5% of games had 10 or more runs), there are a few numbers that stick out here. When either 4 or 6 runs were scored, the average runs scored the following day was 9% higher than average. That falls somewhat inline withe the previous chart, but also seems to be a bit random. If the team played well offensively, there really is no data suggesting they would play well again or totally forget how to hit. However, the number that stands out the most to me is when the Reds were shutout the previous day.

Based on this data set, the game after a shutout was 12% below average for run scoring. Looking at the first week of games this year, the Reds were shutout in three consecutive games. The average runs they scored in the following games was 1.67, which obviously checks out below the mean. This is an extreme example but the larger data set shows a slight historical trend. Playing poorly one game translated to a worse than average game the next day. Scoring less than two runs in a game means that almost everyone on the team struggled, which could take a day or two, maybe even a week to work through. Or in the case of the Reds this year, the better part of a month.