During spring training, Reds manager David Bell made it known that he wanted to use Michael Lorenzen in more situations than just as a pitcher. Through the first 22 games of the season, Bell has stuck to what he said. Figuring out ways to use him is a difficult task for the Reds, as Redleg Nation’s Doug Gray wrote back in February.

Taking a look at the Inning/Score Appearance Matrix on Baseball-Reference.com, interim manager Jim Riggleman used Lorenzen in many different scenarios in 2018, mostly in the sixth and seventh innings. It didn’t matter if the Reds were up by two or down by four. Lorenzen rarely pitched in a close game in the eighth or ninth. He also started three games and got regular pinch hit at-bats, more so towards the end of the season (nine in August and eight in September). 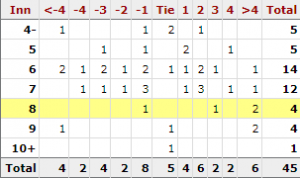 Two years ago, in 2017, Lorenzen made 70 appearances, mainly in the seventh and eighth innings. Bryan Price used him in a more traditional role, as he pitched 25 times in the eighth and 22 times in the seventh. He only received 12 at-bats, but did hit one home run. 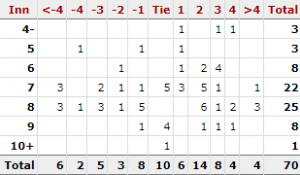 However, in nine appearances in 2019, Lorenzen has entered games in every scenario. He’s already pitched in the fourth, fifth, sixth, eighth, and in extra innings. He’s been used when the Reds are down by four runs, up by one run, and in a tie game twice. 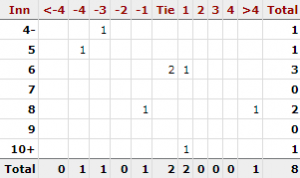 Lorenzen has pitched two innings three times in 2019. In every multiple inning appearance except one, the pitcher’s spot has come around in the batting order at least once. Bell makes sure Lorenzen will bat as well, thus not wasting another pinch hitter. Lorenzen’s been decent at the plate too, going 1-for-5 with two runs scored and an RBI double.

As for the center field experiment, it has worked out exactly how most fans thought it would. He’s not going to play center every day or even semi-regularly. In 2019, he has played there twice for a total of three innings. The first was on Opening Day, when he entered as a pinch runner when the Reds were threatening to score. It proved to be a good move, as he did score, and then stayed in center the next half inning. The second time was a double switch in the ninth with the Reds up 5-0, likely to get him more experience in a low-leverage situation.

It might be too early to determine, but it seems like Bell won’t put him in center very often. He also won’t hesitate to use Lorenzen’s versatility when the timing is right. But Lorenzen is a pitcher first and will be used as such.

Looking at his numbers this season, Lorenzen has been solid. In 10.1 innings, he has a 1.74 ERA and a 4.06 FIP, with nine strikeouts. However, it’s been a struggle for him to get through innings clean. He’s walked five and given up 12 hits, including one home run. It could be that his BABIP is quite high at .344. His BB% is also at 12.5%, over three percentage points higher than previous years. While Lorenzen has struggled to pitch easy innings, his LOB% sits at 96.2%. He’s putting runners on base, but he’s getting himself out of trouble too.

So, what is the ideal situation for Lorenzen? It’s exactly what Bell is doing. He’s trying to get multiple innings out of one of his better relievers and still maximize as many spots in the lineup that he can. However, Bell also gives him plenty of rest between appearances, as he’s only pitched in back-to-back games once this season. Lorenzen will continue to get many opportunities to pitch if he stays healthy this season, both on the mound and at the plate.

All stats current as of Sunday, April 20, 2019. Stats courtesy of Baseball-Reference and Fangraphs.