The Reds offense was dominated for most of the night in San Diego by Padres’ pitching. The Reds at one point had 16 consecutive batters retired and had just three hits entering the 11th inning. It only took one mighty swing off the bat by Derek Dietrich to change the outcome of this game. Dietrich destroyed a 3-1 pitch into the right field seats to give the Reds a 3-1 lead. Zack Duke and Michael Lorenzen finished off another outstanding night of Reds pitching to secure the Reds second consecutive win. 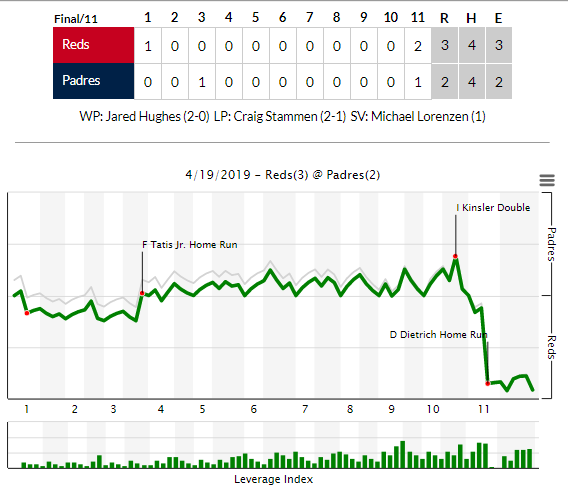 According to Fangraphs WPA statistic (winning percentage added), the most important play of the game was Derek Dietrich’s 2-run home run with 1 out in the top of the 11th inning, giving the Reds a 3-2 lead. That play increased the Reds chances of winning by 36.6% (from 56.1% to 92.7%).

Anthony DeSclafani had a big bounce-back start: 6.0 IP, 2 H, 1 R, 1 BB, 6 K. Disco attacked the hitters mostly on the outer-half of the plate, and it worked tonight. It is amazing what the Reds starters continue to do so far in 2019.

How about Derek Dietrich? He now has 5 homers in just 40 at-bats. I have literally no idea how the Reds signed this dude on a minor league contract.

Eugenio Suarez got the Reds started off right with a first inning home run. It was his 4th bomb of the season.

Raisel Iglesias is back! Raisel struck out the side in his only inning of work (the bottom of the 9th), and he looked absolutely nasty in the process.

Yasiel Puig went 1 for 4, but his best swing of the night resulted in a out. Puig hit a ball 388 feet with an exit velocity of 102.2 MPH. The ball had an expected batting average of .700, but resulted in an out on a nice catch by Myers.

Wandy Peralta pitched a perfect 8th inning, striking out 2. Peralta has yet to allow a run in 7.1 inning this season.

The Reds only collected 4 hits in 11 innings. This offense overall is just brutal right now. Kemp and Winker were both 0 for 4. Dietrich really saved them.

The Reds are now just 4.0 games behind the Brewers (the Pirates are in first place by a game….but they aren’t winning the division). It could be so much worse for the Reds right now in the standings than it is. Dare I say the Reds are back in the mix?

In today’s edition of your eyes can be deceiving: Wil Myers had a terrific over the shoulder catch, robbing Jose Peraza of extra bases. Statcast only had the expected average of that Peraza flyout at .260. Myers is a first-baseman playing centerfield, so it sounds like he made that catch look way more difficult than it was.